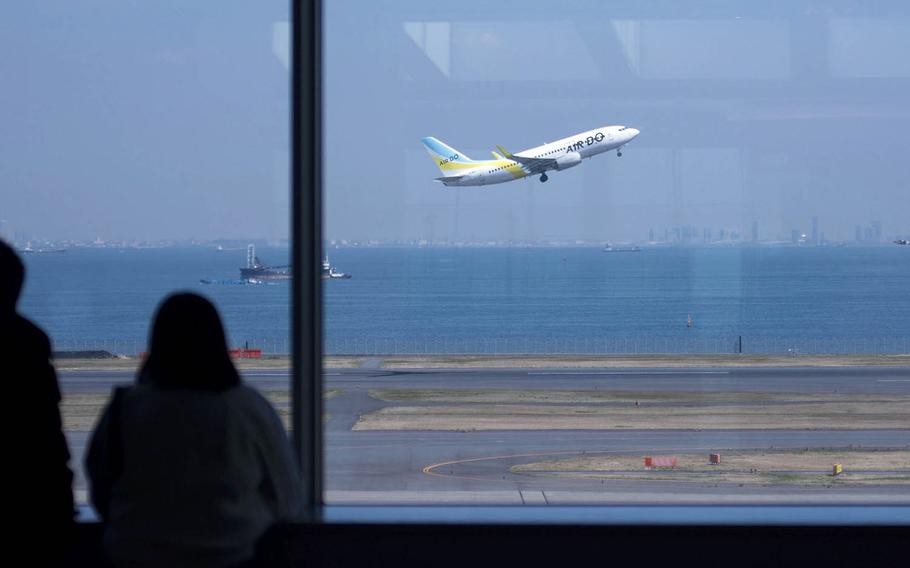 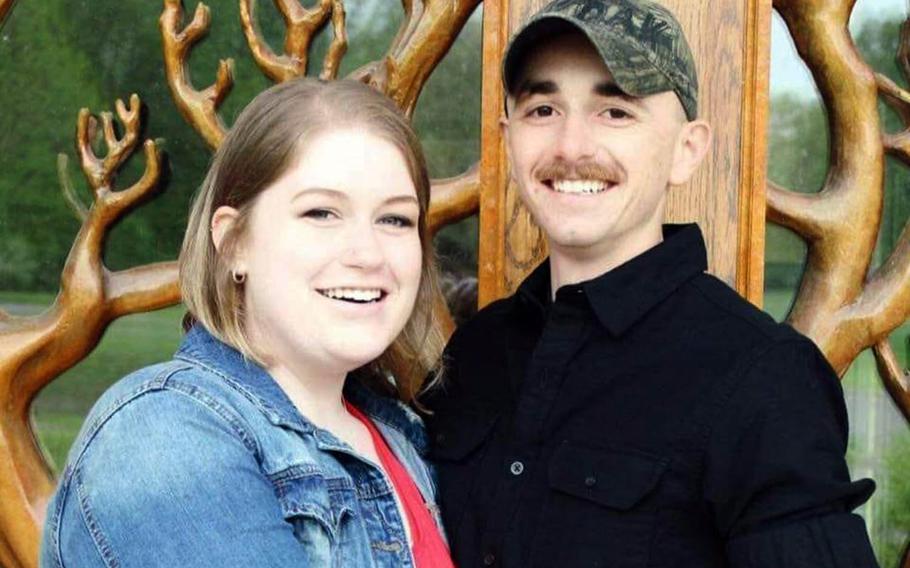 Marine Cpl. Mike Courson, a KC-130 mechanic stationed in Japan, and his wife, Taylor Courson, chose to get married by proxy this year because of travel restrictions related to the coronavirus. (Mike Courson)

Air Force Master Sgt. Joshua Archambo, a flight chief for the 569th U.S. Forces Police Squadron in Kaiserslautern, Germany, has not seen his three children in more than a year, thanks largely to the coronavirus pandemic.

Due to restrictions the Defense Department imposed to curb the spread of the virus, Archambo cannot travel to the United States, and his children — two girls and a boy living in Oklahoma with their mother, Casey Archambo — are barred from visiting Germany, he told Stars and Stripes recently via text message.

“My command’s policy is for non-official travel you have to have a reason to go back to the States,” he said.

Thousands of service members serving abroad, separated from their families by oceans and time zones, are making tough decisions about whether to fly stateside and see their spouses or children during the pandemic.

More than 56,000 soldiers, airmen and Marines are serving overseas apart from their families, according to statements provided to Stars and Stripes by each service. That number includes married couples with or without children and active-duty spouses at separate duty stations. The Navy declined to answer a request for its numbers.

Defense Secretary Mark Esper imposed a “stop movement” order in March that halted all but essential military travel due to the pandemic. Eventually, service members were allowed to resume their moves to new duty stations, for example, while most other travel is still restricted.

Exceptions are permitted, but travel policies vary between service branches and individual commands. The level of risk for coronavirus transmission at a specific U.S. destination is one factor; host nation policies are another.

Service members planning personal travel across international borders may face a month or more in quarantine: 14 days in isolation in the United States, 14 days in the host nation and another 14 days at their duty stations. Some of that time is taken from their leave balances, and the cost to isolate themselves off base in a hotel room or other lodging comes out of their pockets.

“The authority to review risk, health conditions, safety, and approve leave, was delegated to installation commanders for out of area leave such as overseas travel,” said Maj. Holly Hess, an Air Force spokeswoman, in an email Sept. 18. “Leave approval is a local decision based on mission need and local health conditions.”

DOD allows service members to accrue and retain an additional leave balance of up to 120 days until the end of fiscal year 2023, she said.

The Illinois native and his then-fiancée planned a July wedding in Tennessee after he proposed in May 2019, he told Stars and Stripes.

Thinking six months’ notice would suffice for planning purposes, Courson told his squadron higher-ups in January of his plan to use the 30 days of leave he earned for extending his tour at Iwakuni for his wedding, he said.

In February, nearly a month after Japan reported its first coronavirus case, Courson and his fiancée discussed moving or postponing the wedding. They decided to stay the course, believing international travel restrictions would be lifted by June.

“As the pandemic got progressively worse and worse, it was basically like trying to play the lottery about whether I was going to be allowed to go or not,” he said.

First, Courson had to apply for an exception to the stop-movement order, which permits travel for extreme hardship, humanitarian reasons and essential missions.

“These requests are considered on a case-by-case basis and scrutinized for [coronavirus] risk mitigation and host nation policy compliance before being forwarded to a general officer for approval or denial,” Capt. Marco Valenzuela, a spokesman for Marine Aircraft Group 12, told Stars and Stripes in a Sept. 3 email. Courson’s squadron is part of the group.

As the wedding date approached, Courson’s squadron leaders explained he faced six weeks in quarantine to minimize his risk of acquiring or spreading the virus.

Helping out Individual commanders try to mitigate issues like those Courson faced, according to Valenzuela.

Each unit in the aircraft group has a representative to help Marines and sailors plan their travel so that they arrive on a military aircraft at the air station, Valenzuela said. That reduces their travelers’ exposure to the virus, their time in quarantine and the associated costs.

All travelers arriving in Japan via a commercial airliner at a Japanese airport must go directly to an approved location nearby, such as a hotel, to serve 14 days of quarantine, unless their installation is nearby.

For example, service members at bases near Tokyo can schedule with their chain of command to be picked up. At MCAS Iwakuni, they can work with their leadership to fly into Osaka, where they can be retrieved by car.

Upon arrival to their duty stations, military personnel serve another 14 days in isolation and must test free of the virus before exiting.

For service members at MCAS Iwakuni, their quarantine period on base is typically not charged to their leave balance, Valenzuela said, because Iwakuni is their home station.

“The safety and security of our personnel and surrounding communities continues to be a top priority during this pandemic,” he said. “In accordance with policy, we make every effort to minimize the risk of COVID-19 spread, while also avoiding extreme impacts to our operations and personnel.”

Eventually, Courson was allowed to travel for the wedding under a humanitarian exception, but after calculating the time and expense involved, he and his fiancée called off their plans.

Instead, they were married by proxy, which Montana allows if either would-be spouse is in the military. Two strangers made the vows on the couple’s behalf on July 17.

Courson extended his tour in Iwakuni and will join his wife stateside next year after completing his enlistment in the Marine Corps.