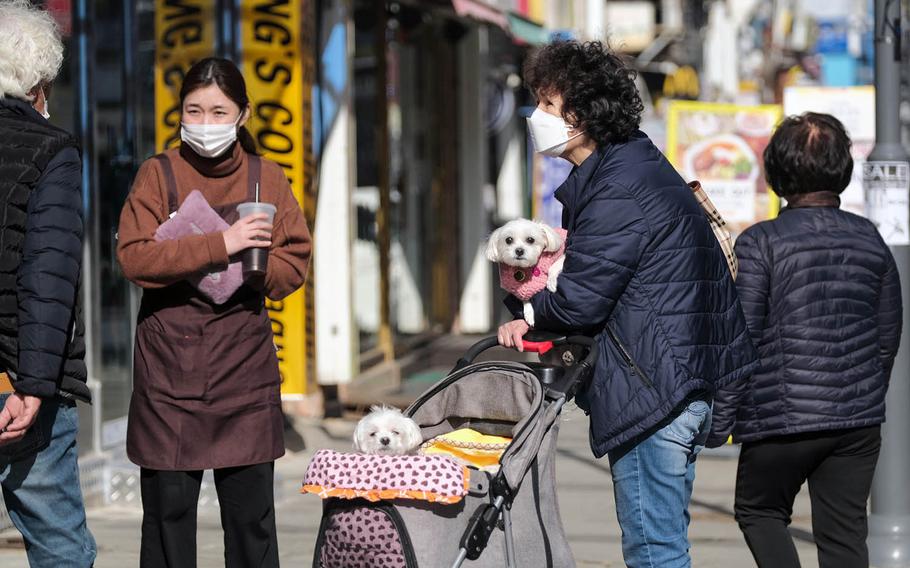 Buy Photo
People in masks go out for a walk in Pyeongtaek, South Korea, Tuesday, March 2, 2021. (Matthew Keeler/Stars and Stripes)

TOKYO — An uptick in coronavirus cases near a U.S. base in South Korea prompted the commander to impose a travel ban Wednesday between the base and the neighboring city.

Dongducheon city is off-limits to anyone associated with Camp Casey, except for “approved mission essential travel,” according to a U.S. Forces Korea news release. Dining in off-post restaurants is also restricted.

One person at the camp tested positive on a random, rapid screening test, Col. Ellis R. Baker, commander of Casey and Yongsan Garrison, said during a Facebook Live town hall Wednesday. He said that case has yet to be confirmed.

Camp Casey, home to the 210th Field Artillery Brigade, is about 25 miles north of Seoul and less than 20 miles from the heavily fortified buffer zone that divides the peninsula.

The Korea Central Disease Control Headquarters on Tuesday reported 218 new cases of COVID-19, the coronavirus respiratory disease, in Gyeonggi province, where Casey and Dongducheon are located. The province reported 111 on Monday and 135 on Friday.

The roundup does not include cities other than Seoul, which reported 116 new patients by midnight Tuesday; however, the News1 news agency reported there were 88 new COVID-19 cases Tuesday in Dongducheon, a city of 94,000.

In Japan, the U.S. military as of 6 p.m. Wednesday reported three new COVID-19 cases: two at Camp Foster, a Marine Corps base on Okinawa, and one with U.S. Army Japan.

The Army’s case is a recent arrival who tested positive in quarantine sometime between Feb. 24 and Wednesday, according to a news release from Army headquarters at Camp Zama.

The Marines provided no further information. They last reported five new infections on Monday, but no others since Jan. 31.

The Tokyo Metropolitan Government reported 316 new cases Wednesday, according to public broadcaster NHK. That’s 84 more than Tuesday, but below the seven-day high, 340, on Thursday.