Coronavirus numbers creep higher in Tokyo and Seoul; US military reports one case 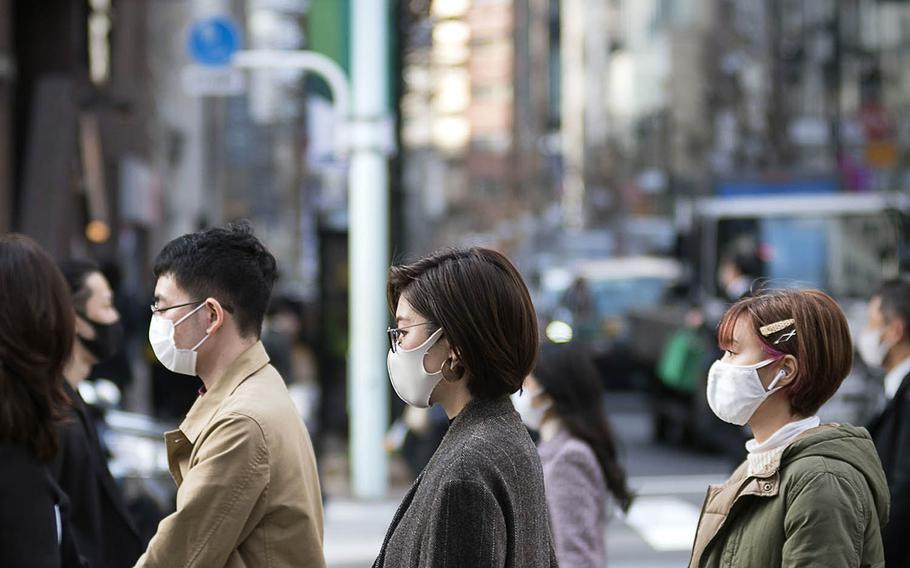 Buy Photo
Pedestrians wear masks to guard against the coronavirus in the Ginza district of central Tokyo, March 9, 2021. (Akifumi Ishikawa/Stars and Stripes)

TOKYO – New coronavirus cases in the capital cities of Japan and South Korea inched higher Wednesday while reports from the U.S. military in those countries remained low.

U.S. Army Japan, headquartered southwest of Tokyo at Camp Zama, had one person test positive for COVID-19, the coronavirus respiratory disease, sometime between March 10 and Wednesday, according to a news release. That individual was already in quarantine as a new arrival to the country.

No other U.S. bases in Japan or South Korea reported new coronavirus patients by 6 p.m. Wednesday.

Tokyo announced 409 new coronavirus patients Wednesday, 109 more than the previous day, according to public broadcaster NHK and metro government data. Wednesday’s count is the highest since 445 on Feb. 18, also the last time the one-day count exceeded 400.

The increase comes as the state of emergency that called on businesses, particularly restaurants, to close between 8 p.m. and 5 a.m. is set to expire Monday in Tokyo and three surrounding prefectures – Saitama, Kanagawa and Chiba – that comprise the greater metro area.

It also coincides with the cherry blossoms, which began Monday in Tokyo and are expected to peak March 22, according to the Japan Meteorological Agency. Flower viewing, called hanami, with picnics in Tokyo’s parks normally attract thousands.

All the U.S. military installations in Japan except Yokota Air Base in western Tokyo have put all or most of Tokyo off-limits to their people, uniformed and civilian, except for duty or essential services.

Japan on Tuesday reported 782 new cases, according to the World Health Organization. The nation has reported 488,688 coronavirus patients during the pandemic.

South Korea reported 469 new patients Tuesday, up by 106 from the previous day, according to the Korea Disease Control and Prevention Agency. Tuesday’s number is the highest count since 490 on Saturday, according to WHO.

Seoul accounted for 120 new cases and Gyeonngi province – home to Camp Humphreys and Osan Air Base – reported 182. Both one-day counts were higher than the previous day’s report by 45 patients in Seoul and 36 in Gyeonngi, according to KDCA. The pandemic has claimed 1,686 lives in South Korea.

On Guam, health authorities on Monday lowered the eligibility for COVID-19 vaccines to age 40 and older, according to the U.S. territory’s Joint Information Center.

The island, population 160,000, had administered nearly 63,000 doses as of Sunday, according to the center. More than 7,700 people have been infected there and 134 people have died of complications of the coronavirus.

The vaccine prioritization committee on the island is considering opening vaccine eligibility to workers in the tourism industry, according to the information center update Monday. The Guam Hotel and Restaurant Association is counting those employees, according to the center.

Gov. Lou Leon Guerrero plans to reopen the island to tourism on May 1.