Coronavirus continues surge in Tokyo, where US bases impose new curfews to slow its spread 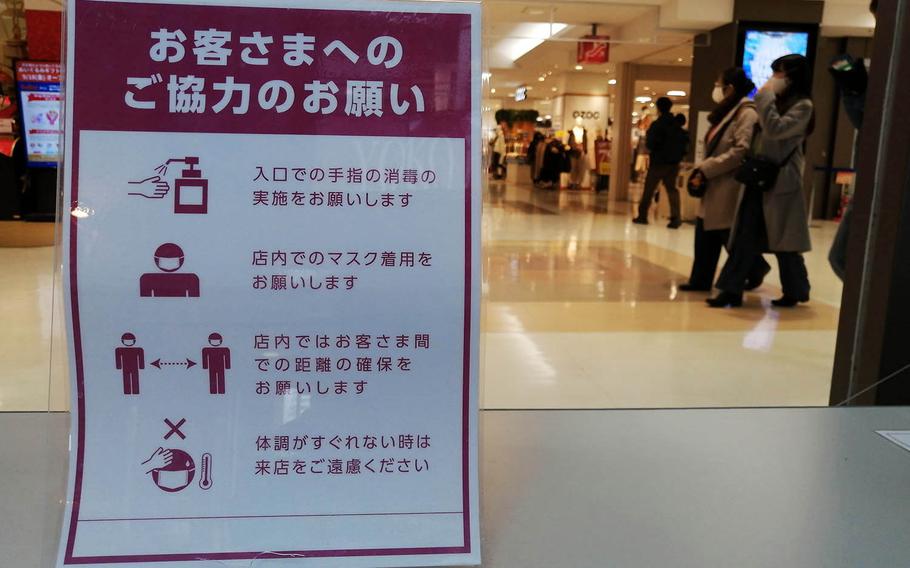 TOKYO – The third wave of coronavirus infections in Japan’s capital city worsened Friday, as the number of new cases there exceeded 2,000 individuals for a second consecutive day.

The U.S. military in Japan as of 6 p.m. Friday reported 67 people newly infected with virus, the majority of them at Yokosuka Naval Base, where a cluster emerged in December. U.S. Forces Korea reported a contractor at Yongsan Garrison, Seoul, tested positive Thursday, according to a news release.

U.S. bases in the greater Tokyo metro area imposed curfews and new limits on travel and other activities after Japan declared a state of emergency Thursday in the city and three surrounding prefectures.

The number of people testing positive but waiting on treatment or hospitalization is also growing, partly because of a shortage of hospital beds and treatment facilities, according to NHK.

Yokosuka, the home 35 miles south of Tokyo of the 7th Fleet, reported 44 individuals had tested positive for the coronavirus since Tuesday, according to a Facebook post. The naval base has 111 people with the virus under observation.

Citing a growing cluster of unknown origin, base commander Capt. Rich Jarrett on Wednesday imposed an 8 p.m.-5 a.m. curfew for everyone associated with the base, including families and civilian employees, whether they live on or off the installation.

Naval Air Facility Atsugi, 25 miles northwest of Yokosuka, reported seven new patients Friday: two were tested upon their arrival, three developed symptoms, one tested positive while in quarantine and one was a close contact of another infected individual, base spokesman Sam Samuelson said.

Yokota Air Base, the headquarters of U.S. Forces Japan in western Tokyo, reported 12 people tested positive between Wednesday and Friday, according to a Facebook post. Seven were in quarantine after arriving from the U.S.; four were also in quarantine after contact with another infected individual; the one remaining person “was identified and quarantined” but the base provided no further information.

Yokota’s commander, Col. Andrew Campbell, on Friday put Yokohama off-limits, along with central Tokyo, to all base personnel and prohibited dining in restaurants from 8 p.m-5 a.m. in Tokyo, Chiba, Kanagawa, and Saitama prefectures until Feb. 7. Takeout or deliveries are permitted after 8 p.m.

U.S. Army Japan, headquartered at Camp Zama, 26 miles southwest of Tokyo, also imposed new limits, including bans on public transportation, travel beyond 93 miles of the base and “non-essential,” off-base activity from 8 p.m.-5p.m., according to a Facebook post.

Marine Corps Air Station Iwakuni, 500 miles west of Tokyo, on Friday reported four new coronavirus cases, none of whom were in quarantine when they tested positive, according to a Facebook post.

Commander Col. Lance Lewis ordered the base locked down overnight Thursday until 9 p.m. Friday to “conduct aggressive contact tracing” and stop the virus’s spread, according to the base.

The base schools and Child Development Center were closed, personnel were ordered to remain at home unless involved in essential activities and shopping off-base was curtailed, among other measures.