Coronavirus cases remain in single digits for US military in Japan, South Korea 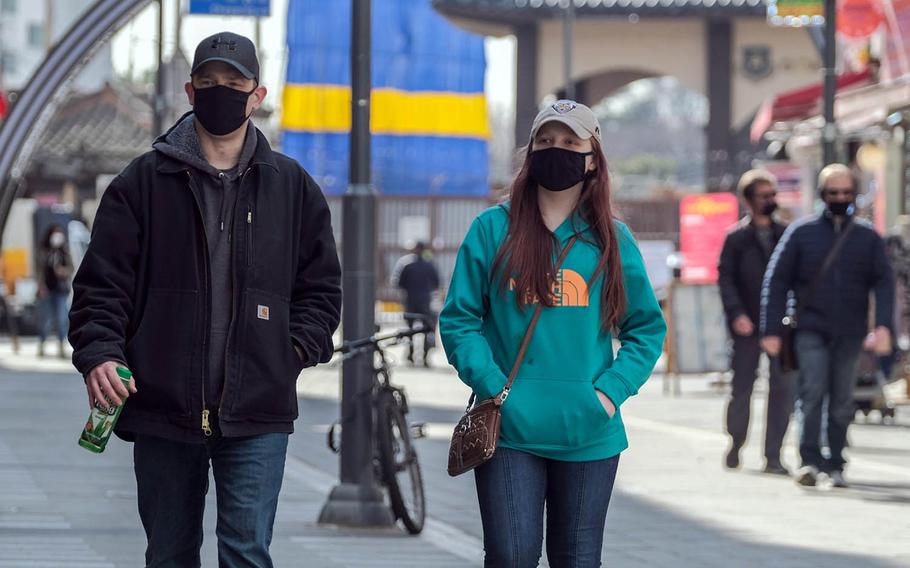 TOKYO — The number of new coronavirus cases reported by the U.S. military in Japan and South Korea remained in the single digits as of 6 p.m. Tuesday.

The airman, from Osan Air Base, about 40 miles south of Seoul, became ill with symptoms of COVID-19, the coronavirus respiratory disease, and tested positive Thursday, according to a news release from U.S. Forces Korea. The service member, who had been isolated at an off-base home since Feb. 18 after contact with another infected person, was moved to a facility at Osan.

In Japan, Naval Air Facility Atsugi, 26 miles southwest of central Tokyo, had one person test positive after arriving at a local airport, according to a Facebook post Tuesday. The base has four patients under observation.

Yokosuka Naval Base, 45 miles south of Tokyo, reported that one person — a recent arrival to Japan — has tested positive since Friday. The base has 10 patients under observation, according to a Facebook post.

South Korea reported 344 new infections as of midnight Monday, the lowest daily count in a week, according to the Korea Disease Control and Prevention Agency. Of those, 120 occurred in Seoul and 111 were reported in Gyeonggi province, home of the largest U.S. military base in the country, Camp Humphreys.

One-day totals in South Korea have fallen from 439 on Feb. 24, according to the World Health Organization.

More than 140,000 people died during the earlier pandemic out of approximately 7.5 million Koreans who contracted the flu, he said. In 1920, Moon said, another 13,500 Koreans died during a cholera epidemic.

So far, 1,606 South Koreans have died due to complications of COVID-19 and 83,284 have contracted the virus, according to the CDCH. Health authorities have inoculated more than 23,000 people, most of them with the AstraZeneca vaccine; 895 received the Pfizer-BioNTech vaccine.

“I am very proud of the fact that the strength that empowered us to prevail over COVID-19 has its roots in the dedication and sacrifice of our medical professionals a hundred years ago,” Moon said.

The headquarters for U.S. Forces Japan, and the Air Force, Army and Navy are within Tokyo or the surrounding greater metro area. All or parts of Tokyo are off-limits to people associated with the U.S. military.

The city and three prefectures surrounding it are under a state of emergency until Sunday. Measures are voluntary but civil authorities ask businesses to close by 8 p.m. and area residents to avoid unnecessary travel and to work from home whenever possible.