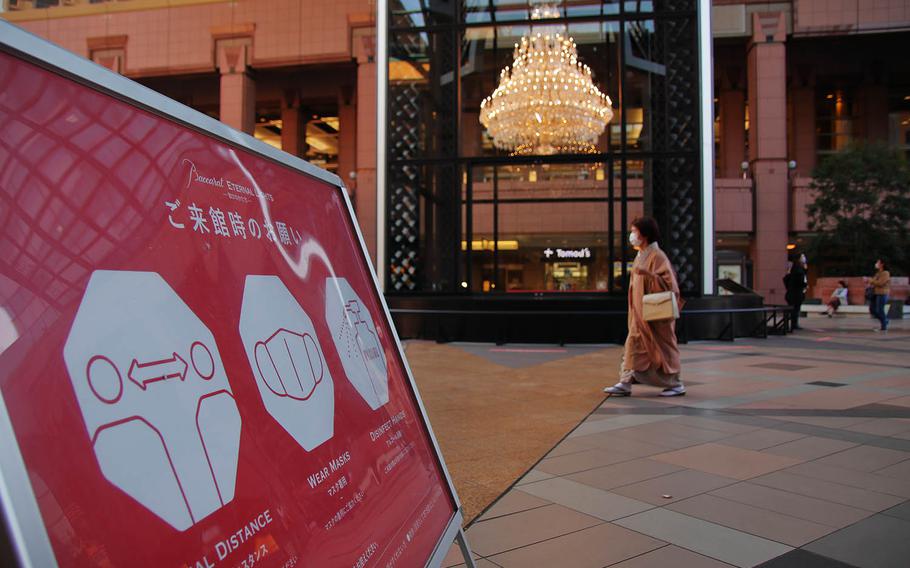 Buy Photo
A sign in central Tokyo reminds pedestrians to protect themselves against the coronavirus, Nov. 17, 2020. (Akifumi Ishikawa/Stars and Stripes)

The Tokyo Metropolitan Government reported 570 new infections Friday, its highest one-day total during the pandemic, according to public broadcaster NHK. The metro government announced the previous high, 539, on Nov. 21, according to its website.

The capital averages more than 400 new cases each day, according to the seven-day running average. Metro data indicate six out of every 100 people tested there is positive for the virus, a relatively high number, according to the Bloomberg School of Public Health at Johns Hopkins University.

South Korea reported 569 new cases Friday, the second day the count topped 500, according to the Korea Disease Control and Prevention Agency. The country last counted more than 500 cases in one day in March, according to The Associated Press.

Prime Minister Chung Sye-kyun, speaking Friday in Sejong city, called on South Koreans to stay home this weekend and refrain from gathering with others, including at meals.

Tougher regulations would mean greater inconvenience, he said. “However, if this present pandemic sweeps over the whole country, the economic activities of working-class Koreans and the livelihood of the people can be hit by COVID-19 irrevocably,” Sye-kyun said, referring to the respiratory disease caused by the coronavirus.

In Japan, Yokosuka Naval Base, 35 miles south of central Tokyo, announced six new infections Friday, bringing its number of active cases to 28, according to a base news release. The six included new arrivals and local cases.

Two of the new patients recently arrived in Japan and were already in quarantine. A third tested positive after showing symptoms of COVID-19, according to the release. The fourth is an employee at a Japanese facility on base who also developed symptoms; the fifth and sixth are affiliated with the U.S. military and were found by contact tracing.

Tokyo Gov. Yuriko Koike in a press conference Wednesday called on restaurants, bars and karaoke clubs to close at 10 p.m. starting Sunday until Dec. 17. Establishments that cooperate will receive about $3,850, she said.

Koike also asked the central government to suspend its Go To Eat campaign for the same period. On Tuesday, the government suspended a parallel campaign, Go To Travel, in Sapporo and Osaka, according to The Japan Times on Thursday.

Japan’s Prime Minister Yoshihide Suga last week said the travel campaign would be suspended in urban hot spots hardest hit by the virus, according to the newspaper.

The campaigns provide discounts on food, lodging, dining and other expenses to encourage travel and revive pandemic-stricken local economies. Public health experts and politicians are divided over the extent the program is contributing to the fall surge, Bloomberg news service reported Friday.

In western Tokyo, Yokota Air Base late Wednesday announced one new coronavirus case, an individual already in isolation as a close contact of an infected person. Yokota, the headquarters for U.S. Forces Japan, experienced a spike in new infections beginning Nov. 16. The base now has 38 active cases, it said Wednesday.

Kadena Air Base on Okinawa also confirmed two cases Wednesday evening. One person had recently traveled outside Japan and tested positive while still quarantined; the second person tested positive Monday after reporting symptoms of COVID-19, according to a base Facebook post. That person self-isolated; close contacts of that person were also quarantined.ditzler.joseph@stripes.com Twitter: @JosephDitzlerkusumoto.hana@stripes.com Twitter: @HanaKusumoto