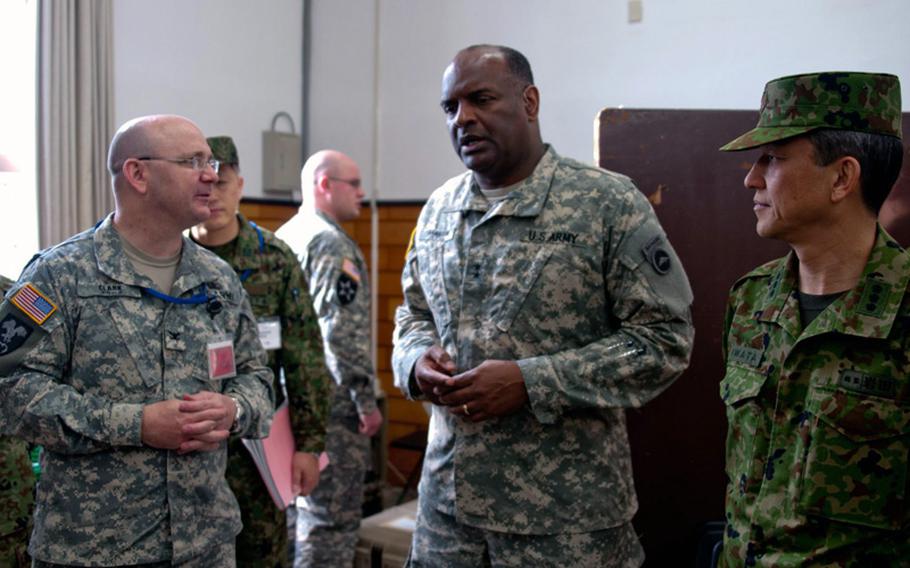 YOKOTA AIR BASE, Japan — Maj. Gen. Michael T. Harrison, commander of U.S. Army forces in Japan, has been suspended from his duties for allegedly failing to report or properly investigate an allegation of sexual assault, the Army said Friday.

Maj. Gen. James C. Boozer, the former deputy commander of U.S. Army Europe, will serve as the interim commander until an investigation is complete and the issue resolved, an Army statement said.

The Pentagon announced in February that Harrison would become deputy commander of the Army component of U.S. Central Command, based in Kuwait, and that Boozer would succeed him in Japan.

The Associated Press reported that an officer who has been suspended, rather than relieved, of command could be placed back into his job if cleared of the allegations. However, AP reported, it won’t happen that way in Harrison’s case because Boozer had already been tapped to take over the command in Japan next week, and the investigation is not expected to be completed by then.

The Army provided no details about the alleged sexual assault case, but the suspension follows inquiries from Stars and Stripes into a senior U.S. Army officer’s alleged sexual assault on a female Japanese civilian employee stationed at Camp Zama. The woman said that when she complained to the officer about his behavior, he replied that Harrison looks out for him.

The alleged victim, a secretary, contacted Stars and Stripes last month complaining that the Army appeared to be stalling an investigation into her claims.

Stars and Stripes asked USARJ about the allegations on May 16. The following Monday, the Army’s Criminal Investigation Command (CID) contacted the woman to schedule a meeting about her case, she said.

The woman, who has also complained to Japanese authorities, provided Stars and Stripes with an email from the Department of Defense Office of the Inspector General stating that her case is also the subject of a probe by the Directorate for Whistleblower Reprisal Investigations.

USARJ public affairs chief Maj. Kevin Toner confirmed that an investigation into the woman’s claims is under way.

In a sworn statement to military investigators March 20, the woman complained that she was sexually assaulted by her boss, who had made suggestive comments to her and other employees at Camp Zama.

In a letter addressed to the Army’s inspector general in Japan, the woman alleged a series of unwanted advances, including gifts, love letters, late-night calls, texts and voice messages from her supervisor dating to his arrival in Japan two years ago, including comments about her body.

“I was so disgusted and asked him to stop it many times but he said he was giving me good compliments so I should appreciate it,” she said.

In her sworn statement, the woman alleges that the officer, while drunk, sexually assaulted her in a hotel room during a work trip.

In her letter to the IG, the woman said she confronted her boss about his behavior later and he allegedly replied that he had known Harrison for a long time and that the general had saved his career once before when he got into trouble. Harrison, a 33-year Army veteran, began his assignment in Japan in October 2010.

The woman said she was removed from her job against her will and given another position last November after other employees complained that the officer was showing her favoritism.