Coast Guard commandant Adm. Karl Schultz speaks during an August 2019 ceremony for the commissioning of two new cutters in Hawaii. Schultz on Monday, Oct. 22, 2019, said the service will homeport three fast-response cutters in Guam within the next two years. (Matthew West/U.S. Coast Guard)

Coast Guard commandant Adm. Karl Schultz speaks during an August 2019 ceremony for the commissioning of two new cutters in Hawaii. Schultz on Monday, Oct. 22, 2019, said the service will homeport three fast-response cutters in Guam within the next two years. (Matthew West/U.S. Coast Guard) 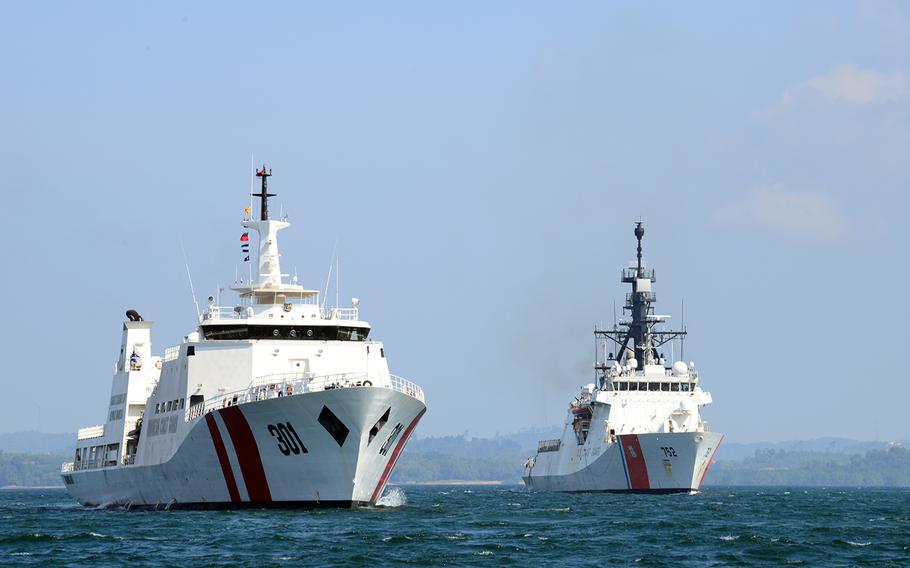 YOKOSUKA NAVAL BASE, Japan — The Coast Guard is “doubling down on Oceania” with plans to homeport three of its newest fast-response cutters in Guam within the next two years, commandant Adm. Karl Schultz said in a press call Monday.

Speaking from the Philippines during a tour of the Indo-Pacific region, Schultz said the move will “allow more frequent and longer patrols” in an area where the Coast Guard has increased its presence this year. The first of the vessels could arrive as soon as mid-2021.

The Coast Guard kept a cutter deployed in the western Pacific since January and in March sent one, the Bertholf, through the Taiwan Strait for the first time.

That activity follows the emphasis the United States set in its 2018 National Defense Strategy on countering strategic competitors such as China and Russia. Since 2010, China has been militarizing islands in the South and East China Seas, a contested area rich in natural resources and fishing grounds.

“In the face of coercive and antagonistic behavior from China, the U.S. Coast Guard offers transparent engagement and partnership at both the professional and personal levels,” Schultz said. “My goal for the United States Coast Guard is to be a transparent and preferred partner in the region.”

In July, Schultz told reporters he’d seen “clear indicators” of Chinese influence in the Northern Marianas and Federated States of Micronesia near Guam. On Monday, he accused Beijing of advancing and expanding “their own interests in the region versus the broader Indo-Pacific, Asian partner nations’ regional interests.”

Basing three cutters in Guam will offer “much longer legs and capabilities than we have today and yesteryears,” he said.

“We’re on a trajectory where the geostrategic importance of the Oceania region has not been higher here in decades,” Schultz said, “and it’s a place that the Coast Guard’s looking to be part of the whole-of-government solution set.”

Though the service falls under the Department of Homeland Security, the U.S. has been deploying Coast Guard vessels under the aegis of the Navy’s 7th Fleet, based in Japan.

“I think the Coast Guard operates below that level of lethality of the Department of Defense on the high-end side of things and above that level of diplomacy at State Department,” Schultz said. “We’re in that sort of sweet spot in the middle.”

The Coast Guard employs “human-to-human interaction,” its “special sauce” and an “alternative to checkbook diplomacy,” he said.

For example, the Coast Guard is helping Vietnam develop a plan to man a 278-foot-long high-endurance cutter the U.S. gave its former adversary as part of the Excess Defense Article program. The U.S. also plans to sell Vietnam 24 smaller patrol-type boats made by the Metal Shark Boats company, Schultz said.

The move comes as Chinese vessels started surveying oil and gas reserves near Vietnam’s coast in June, according to the Asia Maritime Transparency Initiative.

The defense program allows the U.S. to offer excess defense materiel such as ships and weapons to partner nations through a grant or for a reduced price.

Schultz said he visited the cutter Stratton, which relieved the Bertholf in June, on Saturday on Palawan, the Philippine island closest to the contested Spratly Islands claimed by China, Taiwan, Vietnam, the Philippines and Malaysia. The Stratton was participating in Maritime Training Activity Sama Sama with the U.S. and Philippine navies and Japan Maritime Self-Defense force.

Schultz said the Coast Guard has several other projects underway with the Philippines, such as bringing 75 of its coast guard members to train in the U.S. this year. The U.S. service is also considering sharing technology with its Philippine counterpart to help thwart illegal, unreported and unregulated fishing in its waters, he said.

“A common pattern for IUU violators sometimes is operating without their vessel monitoring system or their Automatic Identification System, AIS, depicting their position,” Schultz said. “And some of that has a technological component, as well.”

Schultz said he will visit Japan next week to meet with the head of its coast guard and continue “working with strong partners in the region.”