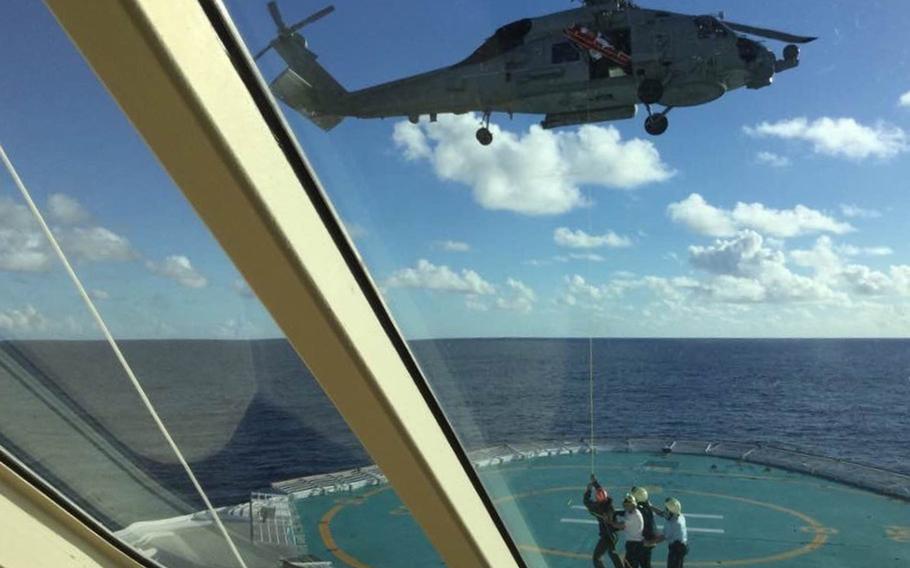 FORT SHAFTER, Hawaii — The U.S. Coast Guard and Navy joined forces Friday to rescue a missing fisherman found clinging to a bundle of life jackets in waters 26 miles west of Oahu, according to a Navy news release.

Family members alerted the Coast Guard Thursday evening that the fisherman set out that morning in his 16-foot boat, but had yet to return.

The Coast Guard launched an HC-130 Hercules and diverted the cutter Joseph Gerezak to begin searching for the man.

The Hercules' crew located debris west of Oahu believed to be from the boat, christened “Size No Matter.”

Around 1:30 a.m. Friday, crew members from one of the Seahawks spotted the boater gripping the life-jacket bundle.

The helicopter crew hoisted the man up and transported him to Queens Medical Center in Honolulu “due to having symptoms of hypothermia,” the Navy said.

“Working side-by-side with the Coast Guard was key in our ability to locate and rescue the fisherman,” Navy Cmdr. Matthew Martin, Squadron 37’s commander, said in the news release.