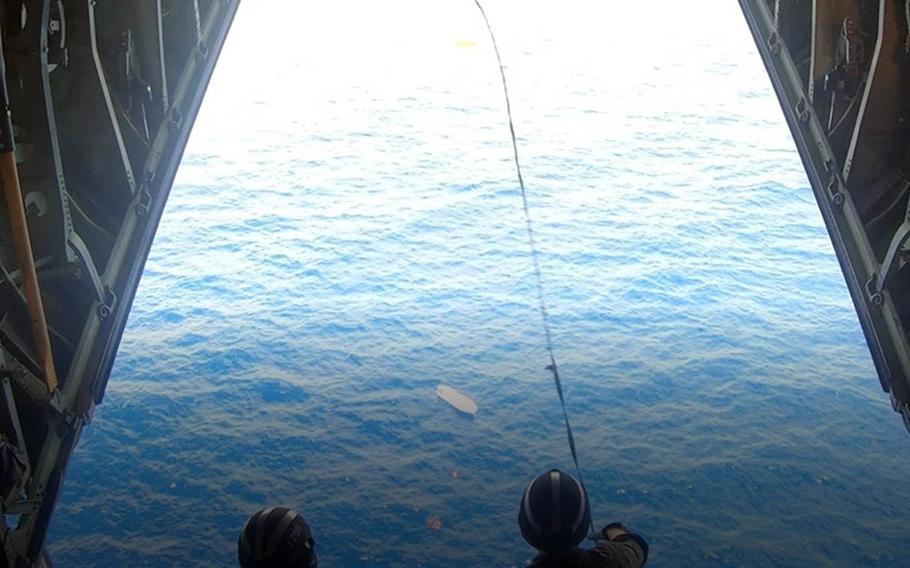 Crew members aboard Coast Guard and Air Force planes coordinated with a merchant ship Friday, March 12, 2021, in the rescue of five mariners on a skiff near Houk Island, Chuuk. (U.S. Coast Guard )

U.S. Air Force and Coast Guard aircraft joined a merchant ship Friday to rescue five mariners in Micronesia whose boat had been missing for three days after running out of gas.

The mariners, on a fishing trip aboard a 23-foot skiff, were rescued in the vicinity of Houk Island, Chuuk, one of four states of the Federated States of Micronesia, the Coast Guard said in a news release Saturday.

The Coast Guard in Guam was notified Thursday evening of the missing fishing crew by someone in Oregon, a Coast Guard spokesman, Petty Officer 2nd Class Matthew West, told Stars and Stripes on Monday.

That person, a Federated States of Micronesia native, had read Facebook posts from acquaintances expressing concern that family members had not returned from a fishing trip, West said.

Meanwhile, an Air Force KC-135 Stratotanker from Andersen Air Force Base on Guam – about 600 miles northwest of Chuuk – spotted the skiff near Polusuk Atoll on Friday afternoon after being notified of the missing vessel.

The KC-135 remained on the scene until the arrival of the Coast Guard plane, which dropped a rescue kit that included food, water and handheld radios.

The merchant vessel Hoegh Brasilia, a Panamanian-flagged ship that transports vehicles, arrived shortly after. That ship participates in the Automated Mutual-Assistance Vessel Rescue System, which is a voluntary global reporting procedure sponsored by the U.S. Coast Guard that assists those in distress at sea.

The merchant ship rescued the crew of the skiff, which was local to Chuuk.

The fact that the skiff crew had a route plan that they had communicated to their families directly contributed to their rescue, Cmdr. Kristen Hahn, search-and-rescue mission coordinator for the Coast Guard’s Joint Rescue Coordination Center Honolulu, said in the news release.

“Through coordination with multiple response agencies, we were able to save five members of our community and bring them back home to their families,” she said.