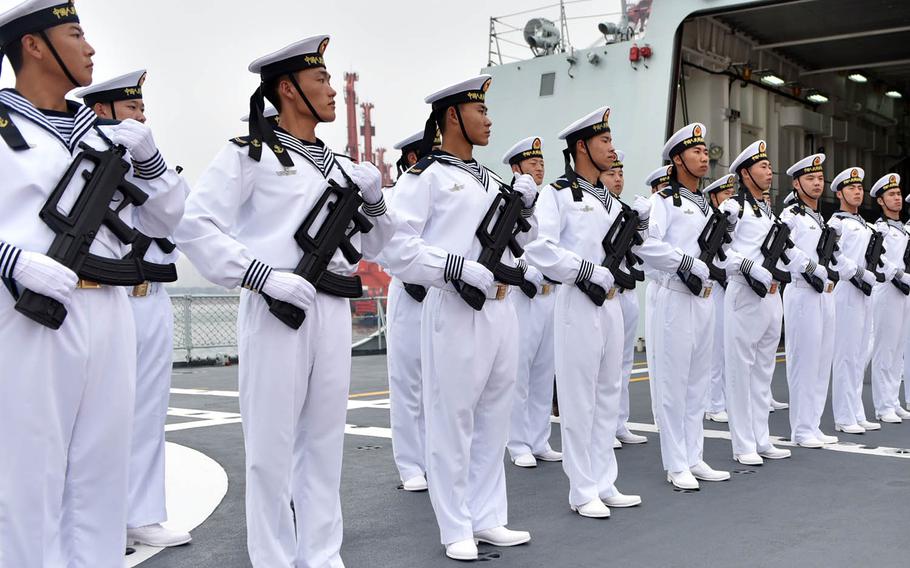 Members of the Submarine Academy in Qingdao, China, stand at attention during a visit by the United States' chief of naval operations, July 20, 2016. (Nathan Laird/U.S. Navy)

A fifth of sailors assigned to Chinese submarines patrolling the South China Sea have experienced some degree of mental health problems, according to a study published this month.

“This study demonstrates for the first time that soldiers and officers in the submarine force in the South China Sea are exposed to a number of mental health risks and are suffering from serious psychological problems,” Chinese researchers concluded in the study published Jan. 7 in the journal Military Medicine.

The study’s five authors are affiliated with the Institute of Military Health Management at Naval Medical University in Shanghai, China.

It assessed the “self-perceived” mental health of Chinese submariners, then compared those findings to “Chinese military male norms,” the study said.

The authors noted that the state of mental health in members of the Chinese military has been the subject of greater scrutiny since the country’s Ministry of National Defense announced in 2006 that psychological testing would be included in the official recruitment examination.

“One group of military personnel at high risk of mental health problems is the submarine force, especially in the South China Sea,” the study said. “Not only is the South China Sea located in the tropical convergence zone, where the climate is characterized by high temperatures and high humidity, but it also has a geographical importance from a political perspective: Vietnam, the Philippines, and other countries around the South China Sea have intensified their territorial claims since 2007. Attributable to the tense relations between these countries, China has increased the number of cruising and sea maneuvers to strengthen protection of the South China Sea.”

While the United States maintains no territorial claims there, the U.S. Navy conducts routine freedom-of-navigation operations in the South China Sea with surface vessels for what it describes as a means of supporting “a free and open Indo-Pacific.”

The frequency and scope of U.S. Navy submarine patrols beneath the sea has not been made public.

A submariner’s life is not an easy one, with sometimes-lengthy confinement to small spaces, manufactured air and artificial light. The U.S. Navy began embedding psychologists aboard aircraft carriers in 1996 to address medical evacuations due to mental health issues, and over the next decade mental health providers were inserted into other Navy and Marine Corps units.

The findings of the just-published study — which the authors say was “arguably the first” to examine the topic — was based on responses to questionnaires by 511 submariners of five corps of the submarine force in the South China Sea.

Submariners assessed their psychological symptoms using the Symptom Checklist-90-R, a brief but well-established instrument used in the mental health field for self-assessments. It is divided into nine broad categories of symptoms, such as obsessive-compulsive behavior, anxiety and hostility.

Researchers found that the scores of symptoms by submariners in four categories “were significantly higher than the Chinese military male norms, indicating that the submarine force in the South China Sea had more serious psychological problems and symptoms of psychopathology.”

Those categories were obsessive-compulsive behavior, anxiety, phobic anxiety and somatization, which is when a mental state, such as depression, manifests itself in physical symptoms.

Just over 21% — or 108 submariners — “rated positive for psychological problems,” the study said.

Submariners with a college education or higher had greater odds of experiencing mental health problems.

Researchers found that the groups of submariners ages 26-30 or those who had been serving between six to 10 years had lower odds of such problems. The authors speculate that this “may be related to the characteristics of military work, which involves a high level of risk that requires not only a young body but also a rich service experience.”