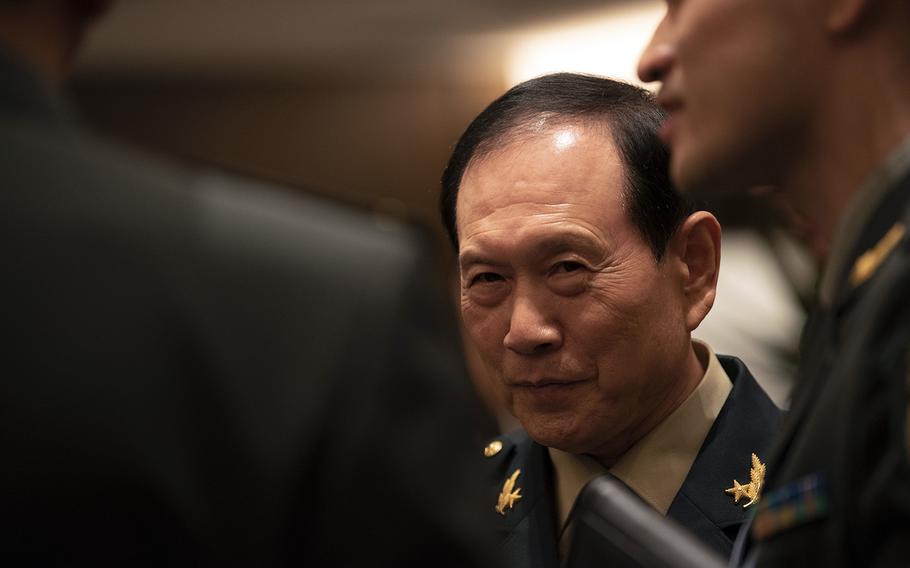 SINGAPORE – China’s defense minister on Sunday denounced U.S. military operations in the South China Sea and support for Taiwan, warning that Beijing will “resolutely take action” to protect its interests.

Gen. Wei Fenghe, however, insisted that the China-U.S. relationship has been growing “despite all the ups and downs.”

In a speech that was both challenging and cooperative, he said China is ready to fight the United States on trade but the door remains open for talks, throwing the ball into Washington’s court.

“As for the recent trade friction started by the U.S., if the U.S. wants to talk we will keep the door open,” he said during a wide-ranging speech at the Shangri-La Dialogue, a major security conference in Singapore.

The U.S.-China trade war escalated last month after President Donald Trump slapped new tariffs on Beijing after accusing it of reneging on commitments in negotiations.

That has raised fears of a growing rivalry between the countries at a critical time since the U.S. needs China’s help on persuading North Korea to abandon its nuclear weapons.

China, which is the North’s main ally and economic lifeline, is committed to the denuclearization, peace and stability of the Korean Peninsula, Wei said.

“We hope that the US and [North Korea] will accommodate each other’s concerns with cool heads and patience, work towards the same goal and resume the dialogue for peace at an early date,” he said.

Wei was responding directly to comments made the day before by acting Defense Secretary Pat Shanahan at the same podium.

Shanahan criticized what he called China’s efforts to militarize the South China Sea and to steal technology from other countries, calling them part of “a toolkit of coercion” that threatens to destabilize the region.

China claims much of the contested waterway as its own despite protests from smaller countries in the region and has engaged in a massive construction program including outposts equipped with airstrips, radar and missile stations.

Wei, the most senior Chinese delegate to address the annual conference in Singapore, tried to turn the tables by accusing the U.S. of stoking tensions by sending warships and aircraft to the area in so-called freedom of navigation operations.

“Building facilities on one’s own territory is not militarization,” he said. “We are deploying the facilities because we feel the threat.”

“Some countries have blatantly showed muscles in this region. How can we respond to that? Can we use handguns?” he added, in a thinly veiled reference to U.S. operations in the area.

He also warned the U.S. against supporting the self-governing island of Taiwan. On Saturday, Shanahan stressed the U.S. provision of defense articles and services to Taiwan, saying the support “empowers the people of Taiwan to determine their own future.”

China claims Taiwan is part of its territory even though it split from the mainland during a civil war seven decades ago. Beijing seeks peaceful reunification with Taiwan but will not rule out the use of force, Wei said.

“No attempts to split China will succeed,” he said. “Any foreign interference in the Taiwan issue is doomed to failure.

“We will strive for the prospects of peaceful reunification with utmost sincerity and greatest efforts, but we make no promise to renounce the use of force,” he added.

The tit-for-tat speeches reflected the increasingly troubled relationship between two countries that are vying for influence in the region.

Wearing his uniform, Wei said the Chinese army doesn’t want to cause trouble for anybody but will protect its interests.

"Should anybody risk crossing the bottom line, the [People's Liberation Army] will resolutely take action and defeat all enemies," Wei said.gamel.kim@stripes.com Twitter: @kimgamel