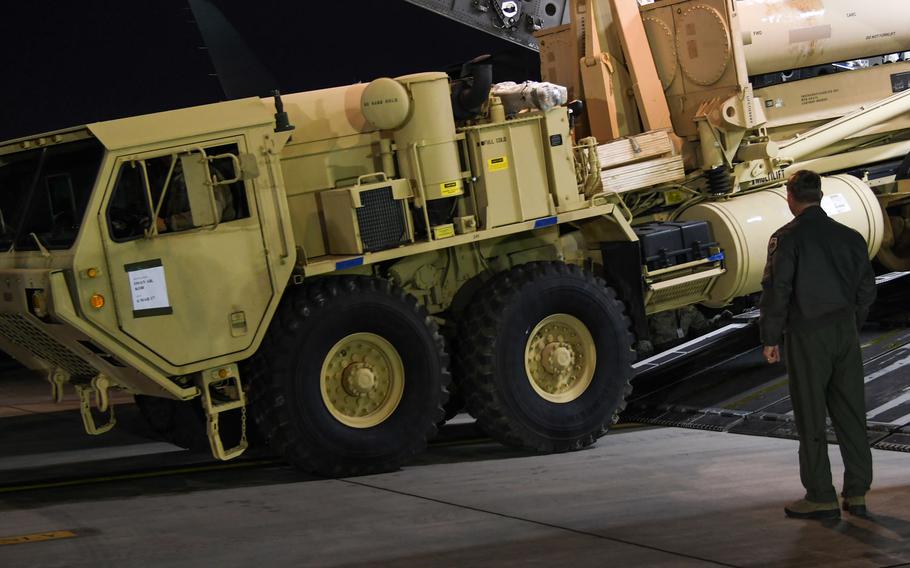 U.S. Forces Korea continued its progress in fulfilling the Republic of Korea - U.S. Alliance decision to install a Terminal High Altitude Area Defense (THAAD) on the Korean Peninsula as the first elements of the THAAD system arrived in the ROK. "The timely deployment of the THAAD system by U.S. Pacific Command and the Secretary of Defense gives my command great confidence in the support we will receive when we ask for reinforcemet or advanced capabilities," said Gen. Vincent K. Brooks, U.S. Forces Korea commander. (U.S. Forces Korea photo)

U.S. Forces Korea continued its progress in fulfilling the Republic of Korea - U.S. Alliance decision to install a Terminal High Altitude Area Defense (THAAD) on the Korean Peninsula as the first elements of the THAAD system arrived in the ROK. "The timely deployment of the THAAD system by U.S. Pacific Command and the Secretary of Defense gives my command great confidence in the support we will receive when we ask for reinforcemet or advanced capabilities," said Gen. Vincent K. Brooks, U.S. Forces Korea commander. (U.S. Forces Korea photo) 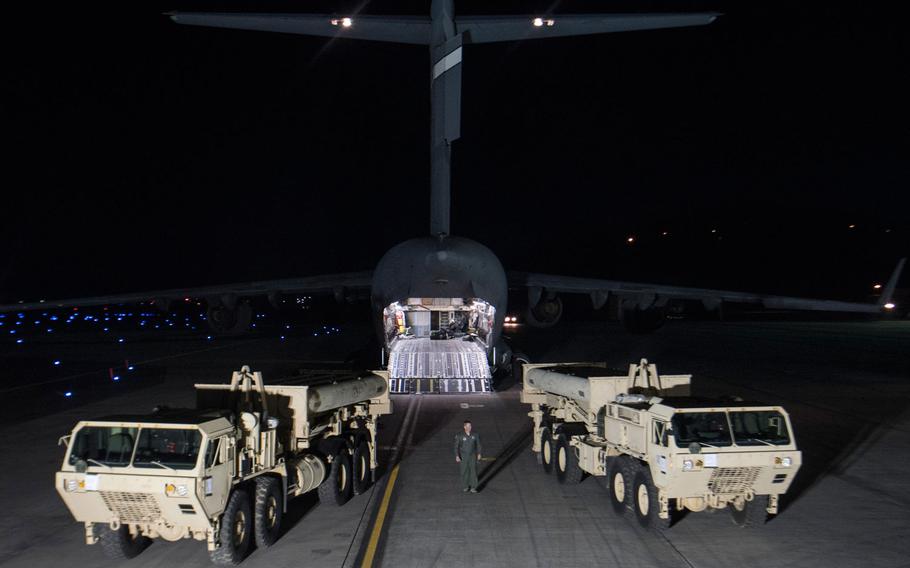 The first parts of the Terminal High Altitude Area Defense system known as THAAD arrived at Osan Air Base on the divided peninsula shortly after Pyongyang launched four ballistic missiles into the sea near Japan on Monday. (U.S. Forces Korea photo)

SEOUL, South Korea — The U.S. began deploying a controversial missile-defense system in South Korea, shortly after the North launched four missiles in a test that heightened concerns it is making progress with its nuclear-weapons program.

China, which strongly opposes the deployment of the Terminal High Altitude Area Defense system, known as THAAD, warned Washington and Seoul to be prepared to bear the consequences.

"We will definitely be taking necessary measures to safeguard our own security interest," Chinese Foreign Ministry spokesman Geng Shuang told reporters in Beijing.

Two launchers and other parts of the arrived at Osan Air Base on the divided peninsula overnight on Monday.

He noted that Defense Secretary Jim Mattis and his South Korean counterpart, Han Min-koo, agreed in a phone call last week that the anti-missile battery would be deployed as soon as possible.

The military didn’t provide a specific timeline for completing the construction of the system, which includes truck-mounted interceptors, an AN/TPY-2 radar that can detect and track ballistic missiles in descent, and fire control.

The commander of U.S. forces in Korea, Gen. Vincent Brooks, said in November that he expected it to be operational in eight to 10 months, which means as early as July.

However, since then the allies have agreed to expedite the deployment, in part because of a growing sense of urgency about the threat but also presumably to ensure political turmoil in South Korea doesn’t derail the process, analysts said. South Korea’s Yonhap news agency quoted a military official in Seoul as saying THAAD could be operational as early as April.

President Park Geun-hye, a strong advocate of the system, is facing impeachment that could force early elections. While the prime minister and acting president also supports THAAD, the main opposition candidate, Moon Jae-in, has said a decision on the deployment should be left to the next administration.

“Expediting deployment aims to create facts on the ground at the soonest possible date,” said Michael Ellemen, a missile-defense expert at the Washington, D.C.-based International Institute for Strategic Studies.

“Also, I don't think [South Korea] or the U.S. want any delays, as they would offer a new government in Seoul a window to possibly change course and halt deployment,” he added. “So the signal is: this is a done deal.”

Washington and Seoul agreed in July to deploy THAAD to counter a growing threat from North Korea, which has defiantly continued to pursue its nuclear-weapons program despite diplomatic pressure and tightened U.N. Security Council sanctions.

But the plan met several obstacles. Chief among them is adamant opposition from China, which fears the battery’s powerful radar could be used to spy on its military. Beijing has reportedly already responded with economic retaliation against South Korea in the form of curbing tourism and targeting South Korean businesses.

The latest target has been the Lotte Group, one of South Korea’s biggest conglomerates, which paved the way for the deployment by agreeing to a land-swap deal that will allow THAAD to be stationed on a former hilltop golf course owned by one of its affiliates.

"We once again strongly urge the relevant sides to stop the process of deployment and refrain from further going down that wrong path," Geng said.

Supporters argued that the benefits from an advanced missile defense system would outweigh the risk of antagonizing China.

When it announced the planned deployment in July, the Pentagon said THAAD would “contribute to a layered missile defense” that will enhance the missile-defense capabilities already available to the alliance.

THAAD, made by Lockheed Martin Corp., is designed to destroy short- and medium-range missiles at a high altitude, while the Patriot missiles long employed by the alliance would work at a lower level.

“The timely deployment of the THAAD system by U.S. Pacific Command and the Secretary of Defense gives my command great confidence in the support we will receive when we ask for reinforcement or advanced capabilities," Brooks, the USFK commander, said in a statement.

South Korea long resisted U.S. pressure to agree to allow THAAD to be deployed in the country. But it relented last year after the latest crisis was touched off when North Korea conducted its fourth nuclear test followed by a long-range rocket launch.

Pyongyang went on to carry out a fifth nuclear test in September along with two dozen missile tests throughout the year. Tensions have further risen this year as North Korea conducted two more missile tests, most recently the barrage on Monday, which landed near Japan.

North Korea’s state-run news agency reported that Monday’s launches - with photos showing four missiles trailed by flames as they took off nearly simultaneously – were a dress rehearsal for an attack on U.S. bases in Japan.

Leader Kim Jong Un also used his New Year’s address to announce that North Korea was in the “final stages” of preparations to test an intercontinental ballistic missile. That would put the country closer to its stated goal of being able to target the U.S. mainland with a nuclear-tipped missile.

The U.S. has about 28,500 servicemembers stationed in South Korea, which is separated from the North by the world’s most fortified border. The countries remain technically at war after the 1950-53 conflict ended in an armistice instead of a peace treaty.

Riki Ellison, founder of the Missile Defense Advocacy Alliance, said the next challenge will be the construction and need to secure the system’s new home, which is in a remote southeastern region called Seongju.

He said the very presence of THAAD would make the North Koreans think twice before striking on the peninsula.

“I think it shows that South Koreans have a capability now to defeat a nuclear ballistic missile so that alone changes (the North Koreans’) calculus - knowing that a certain amount of missiles can’t go through and that South Koreans are not completely vulnerable,” Ellison said.