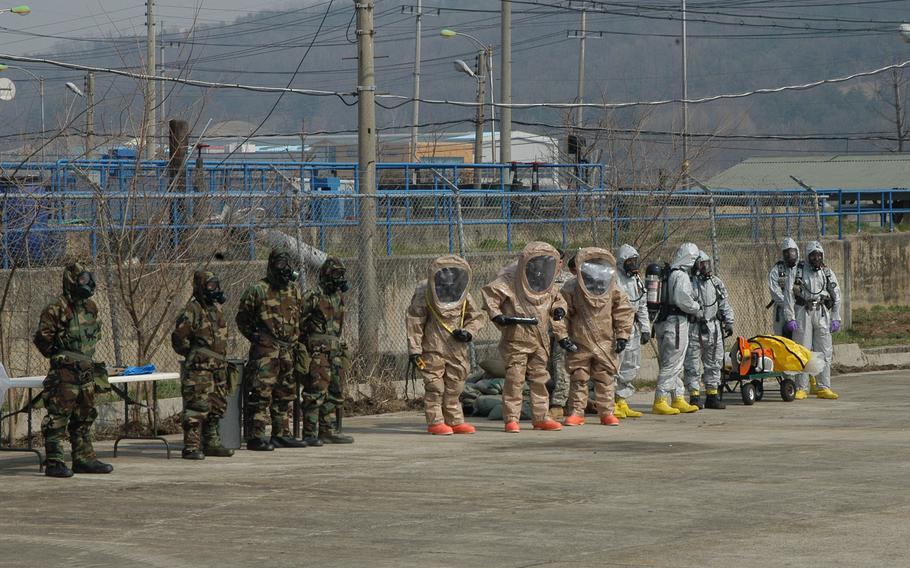 Members of the 23rd Chemical Battalion don protective gear to participate in a demonstration on April 4, 2013, at Camp Stanley in South Korea. (Jon Rabiroff/Stars and Stripes)

CAMP STANLEY, South Korea — The U.S. military on Thursday formally welcomed the return to South Korea of a battalion equipped to deal with nuclear, biological and chemical attacks, just hours after North Korea announced its military had the go-ahead to hit American interests with nuclear weapons.

Unlike recent U.S. displays of military might on the Korean Peninsula, the timing of the uncasing and repatching ceremony marking the return of the 23rd Chemical Battalion had been in the works for weeks and was purely coincidental.

In fact, when Lt. Col. Dale Crockett, the battalion commander, was asked during a brief press availability after Thursday’s ceremony how his charges would respond in the event of a nuclear attack from North Korea, he went out of his way to avoid being provocative saying, “That’s something I’d have to defer to the senior leadership of the 8th Army and 2nd Infantry Division.

“I appreciate the question, (but it’s) not one that I’m really ready to answer today,” he said.

Still, the return of the battalion after eight years away and the sight of its soldiers donning protective gear during a demonstration after the ceremony provided a grim reminder that while North Korea’s boasts about its nuclear capabilities capture the lion’s share of international headlines, the rogue country’s chemical and biological weapons could be even more deadly in the event of a conflict.

The Associated Press once reported it was, “widely believed the North has a chemical capability that it could unleash in the early stages of a land war to demoralize defending forces and deny the use of mobilization centers, storage areas and military bases.”

And a Popular Mechanics investigative report years ago stated that - according to defectors, South Korean intelligence agencies and other sources - North Korea had built “one of the world’s most extensive biochemical warfare programs.”

“The weaponry is thought to have the potential to decimate [South Korea] and the 28,000 U.S. troops stationed there,” the story said.

Tensions on the Korean Peninsula have been high for weeks, after the United Nations slapped additional sanctions on North Korea in the wake of its recent satellite launch and nuclear test.

The North, which is also upset about ongoing joint U.S.-South Korea military exercises on the peninsula, has threatened to turn Seoul and Washington, D.C., into a “sea of fire,” and declared void the armistice that effectively ended the Korean War.

While criticizing North Korea for its bellicose threats, the U.S. has been uncharacteristically brazen in its use of military hardware during the ongoing Foal Eagle war games — including nuclear-capable B-52s, a nuclear attack submarine, F-22s and B-2 Stealth bombers.

On Wednesday, a North Korean army spokesman was quoted by the government-controlled Korean Central News Agency as saying, “The moment of explosion is approaching fast…

“We formally inform the White House and Pentagon that the ever-escalating U.S. hostile policy toward (North Korea) and its reckless nuclear threat will be smashed by the strong will of all the united service personnel and people and cutting-edge smaller, lighter and diversified nuclear strike means of (the North), and that the merciless operation of its revolutionary armed forces in this regard has been finally examined and ratified,” the spokesman said.

“The U.S. had better ponder over the prevailing grave situation,” he said.

The U.S. Army announced in October that the 250-member 23rd Chemical Battalion would return to South Korea after spending the past eight years based at Joint Base Lewis-McChord, Wash.

Officials said at the time the move was not prompted by any specific action by North Korea, but a 2nd Infantry Division statement pointed out, “In Korea, like no other place on the globe, the potential for large-scale, full-spectrum conflict against the U.S. and its allies exists on a daily basis.