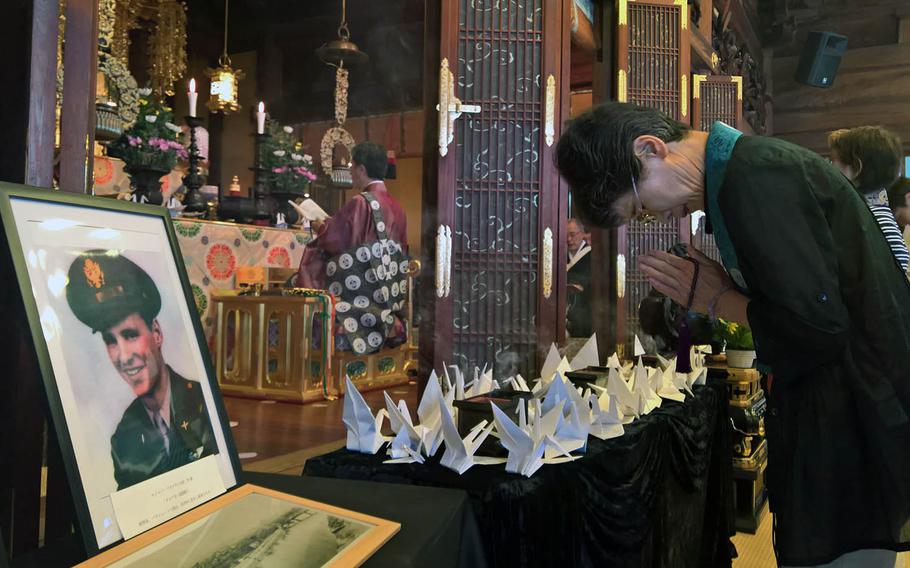 Buy Photo
A local resident prays during a service for U.S. airmen downed in World War II during a memorial service in western Hiroshima on Saturday, July 27, 2019. (James Bolinger/Stars and Stripes)

HIROSHIMA, Japan — A group of Japanese citizens gathered recently at a memorial service for American servicemen killed 74 years ago near Hiroshima during World War II — including a handful of prisoners of war who perished in the first wartime atomic bombing.

More than 150 people, many from 22 local Buddhist temples of various denominations, gathered July 27 at the Kyosenji — a temple in Kusatsu, western Hiroshima — to remember the crews of more than 20 U.S. aircraft downed during an attack on the Imperial Japanese Navy on July 28, 1945, near Kure city.

“I was reminded of the Buddhist teaching, which says everyone in the world is your family and brothers, and that it is wrong to be divided into friends and enemies and hurt each other,” Ippo Kosen, head priest at Kyosenji and co-organizer of the memorial service, told Stars and Stripes on July 24.

Most of the POWs taken that day came from two U.S. Army Air Corps B-24 Liberator bombers, the Taloa and the Lonesome Lady. Eight crewmembers survived from the Lonesome Lady, which crashed near what is now Yanai city. Three aboard the Taloa survived. It crashed in the Saeki area of Hiroshima, close to the temple where the service was held.

The 11 survivors who parachuted out of the broken planes, along with three crewmen from two U.S. Navy planes that were shot down, were taken as POWs by the Japanese military to Hiroshima. Twelve of those Americans died as the result of the blast when the U.S. dropped an atomic bomb on Hiroshima on Aug. 6, 1945.

Kosen said he helped organize the memorial service after meeting with Shigeaki Mori, an historian and hibakusha, which is the Japanese term for an atomic bomb survivor. Kosen had also read Mori’s book, “The Secret History of American Soldiers Killed by the Atomic Bomb” published in 2008.

Mori researched the stories of each American, contacted their families in the United States and helped get their names added to the registry of atomic bomb victims. A short documentary film called “Paper Lanterns” details his meeting with the families of two POWs who died at Hiroshima.

A necessary memorial Kosen said he was in elementary school during the war and was taught that the Americans and British were devils. Over time, he said, he realized that was wrong.

“After meeting Mr. Mori many times, I realized that it is necessary to hold a memorial service for U.S. servicemembers who were deployed and died in Kusatsu,” he said.

Mori told Stars and Stripes on July 25 that he first suggested a memorial service for Taloa’s co-pilot, 1st Lt. Rudolph Flanagin, who parachuted from the Taloa and landed in the water near Kyosenji temple and later died from his injuries.

The memorial eventually grew into a service for all the Americans who died in the area during World War II.

Flanagin’s family was told by the U.S. military that the lieutenant was missing in action and they never knew how he had died. His remains were eventually recovered and buried in Hawaii.

The two men exchanged emails Feb. 23 and have been in regular contact since.

Mori told Michael Flanagin about his great uncle and sent him a piece of the Taloa. In return, Mori received a photo of Lt. Flanagin, a group photo of the Taloa crew posing in front of the aircraft and a shot of the grave in Honolulu.

Lt. Flanagin’s photo was on display during the memorial service along with pieces of the aircraft and other memorabilia locals saved from the wreckages.

According to Mori’s book, Flanagin was spotted by fishermen when he landed near Kusatsu. He was beaten with a pole before he was taken ashore and died shortly afterward. The autopsy performed at a Japanese hospital found that he would have died from the bullet wounds he suffered before the crash even without the beating, according to the book.

Deeds bridge cultures Michael Flanagin said his family was honored that the Japanese Buddhist priests of their own volition held a memorial service for his great uncle and the other Americans.

“I cannot express how much this memorial service meant to me and my family,” he said in an email. “I didn’t know much about my great-uncle’s story until recently. Sadly, my great-grandmother never accepted Rudolph’s death and never talked about him, other than saying she hoped he was found and taken in by a nice family in Japan. All of his documents and photos were put away inside a chest in my grandparents’ house.”

The service began with the monks reading sutra or scripture and the ringing of a gong. A message from Michael Flanagin, translated into Japanese, was read aloud. The attendees made offerings of two-headed origami cranes, which were folded before the service.

The two-headed crane represents the jivamjivaka, a two-headed bird that is said to live in paradise, Kosen said. He got the idea from former President Barack Obama, who offered a paper crane when he visited Hiroshima in 2016.

The offerings evoked a core teaching of Buddhism that says everyone lives in coexistence and is connected, therefore every life should be valued, Kosen said.

After the offering, the audience watched “Paper Lanterns,” and listened to Mori and area residents share first-hand stories about the aircraft crash. The service ended when the audience sang a Buddhist hymn while Mori’s wife, Kayoko, played piano.

“It is a Japanese custom to give memorial services for the dead,” Koshi Kobayashi, a member of the POW Research Network Japan, said after the ceremony. “Seventy-four years after the deaths of these men, Mr. Mori’s wish to give them a memorial service was realized for the first time. I hope the 12 American servicemembers who died will be [reborn] in heaven.”