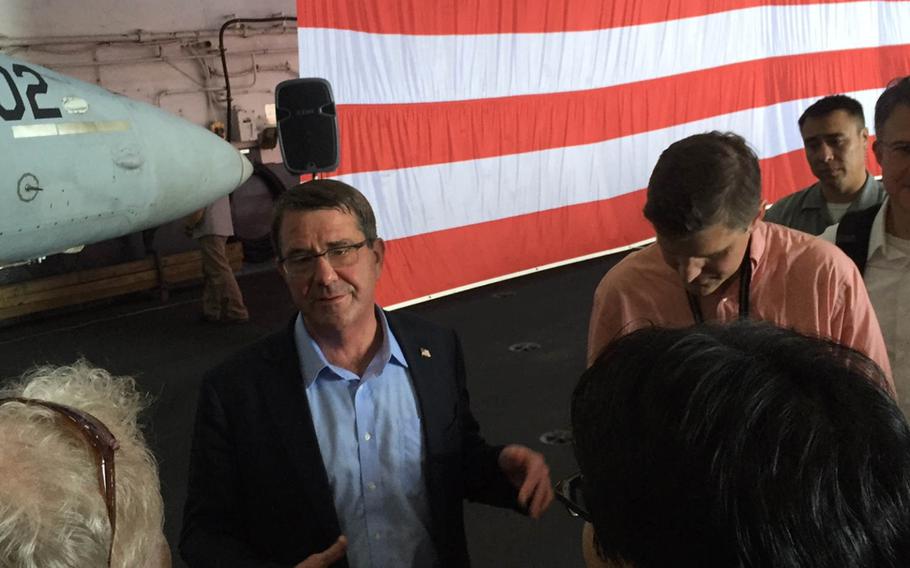 Secretary of Defense Ash Carter speaks to reporters aboard the USS Theodore Roosevelt as it sails in the South China Sea on Thursday, Nov. 5, 2015. (Tara Copp/Stars and Stripes)

Secretary of Defense Ash Carter speaks to reporters aboard the USS Theodore Roosevelt as it sails in the South China Sea on Thursday, Nov. 5, 2015. (Tara Copp/Stars and Stripes) Cmdr. Robert C.Francis, commander of the USS Lassen, talks to reporters about the ship's transit through Chinese-claimed waters near Subi Reef on Oct. 27, 2015. Francis boarded the USS Theodore Roosevelt on Thursday, Nov. 5, 2015, while Defense Secretary Ash Carter was aboard. The Lassen accompanied the Roosevelt on a sail through the South China Sea on Thursday. (Tara Copp/Stars and Stripes) 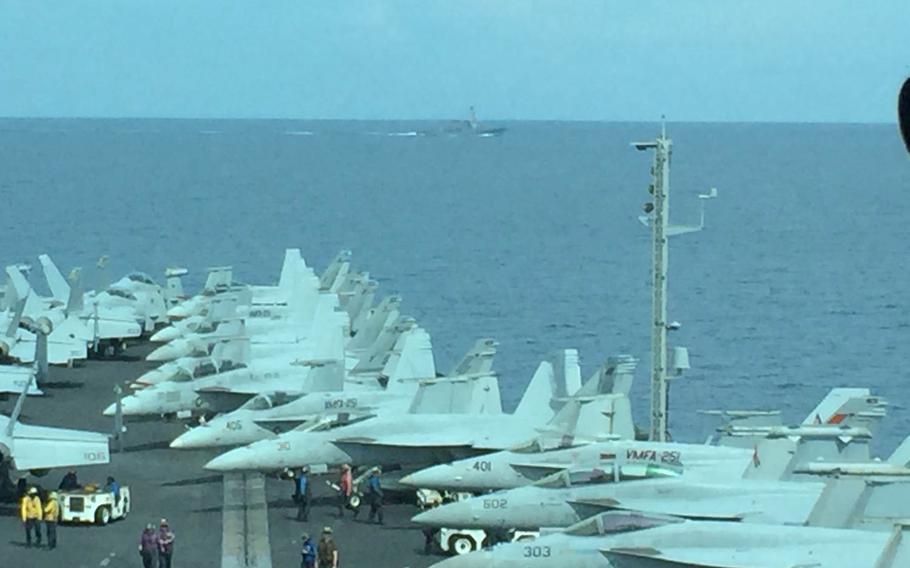 The USS Lassen as seen from the bridge of the USS Theodore Roosevelt on Thursday, Nov. 5, 2015, on a sail in the South China Sea. (Tara Copp/Stars and Stripes) 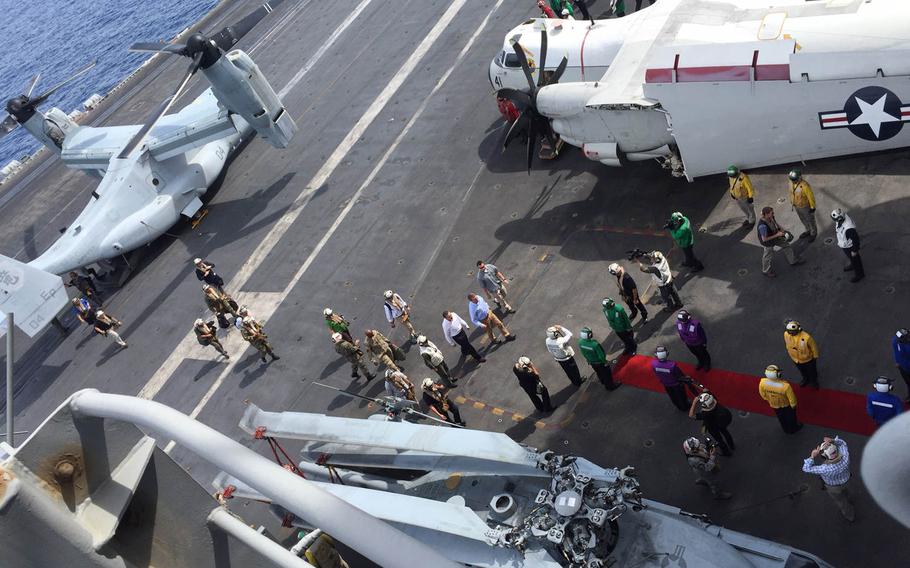 Secretary of Defense Ash Carter arrives on the deck of the USS Theodore Roosevelt on Thursday, Nov. 5, 2015. (Tara Copp/Stars and Stripes)

ABOARD THE USS THEODORE ROOSEVELT — Defense Secretary Ash Carter, aboard the aircraft carrier as it sailed through the waters of the disputed South China Sea, said Thursday that American sea power is the "Big Stick" needed to bring stability to a region unnerved by Chinese territorial claims.

The Roosevelt, nicknamed “The Big Stick,” was accompanied by the USS Lassen — the Navy destroyer that angered China last month when it sailed within the 12-mile zone around one of the disputed Spratly Islands, cruising as close as six or seven miles to the Chinese-claimed Subi Reef.

On Thursday, the Roosevelt and Lassen kept their distance, patrolling about 150-200 miles south of the Spratlys, but the symbolism of being aboard the carrier was clear.

There is “great tension out here over the issue of the South China Sea,” Carter said while aboard the carrier. “But T.R.’s motto was 'Speak softly and carry a big stick.”

Carter spent the last few days at the Association of South East Asian Nations defense ministers’ summit in Malaysia, where he also met with Chinese officials. The defense ministers failed to reach a consensus on the territorial claims of each nation, deciding to scrap a joint statement that traditionally ends their annual meeting, despite behind-the-scenes maneuvering by the United States and China.

Carter said Thursday, from aboard the massive nuclear-powered carrier, he would continue to try to reach an understanding with China.

“This has been a region that has enjoyed stability for a long time,” he said. “It would be a shame if people here ruined that. I don’t expect that to occur because the United States will continue to play the role it has.”

The United States and China do not belong to ASEAN but are invited to participate, given their influence in the region. The dispute over the contested waters hijacked the meeting’s agenda.

Prior to visiting the Roosevelt, Carter said the United States will continue to conduct freedom-of-navigation operations and “fly, sail and operate” in the South China Sea to guarantee international waters remain open to all.

The Lassen’s skipper, Cmdr. Robert C. Francis, was on board the Roosevelt during Carter’s visit and spoke about his ship’s patrol within the 12-mile territorial limit around Subi Reef.

During its Oct. 27 patrol near the reef, the Lassen was met by the Chinese destroyer Lanzhou, a ship similar in size and makeup to the U.S. destroyer. After several days of cordial exchanges over the radio, the Lassen sailed within the 12-mile zone.

The Chinese radioed: “You are in Chinese waters. What is your intention?”

Francis said the Lassen responded over and over, that it was “operating in accordance with international law.”

As they sailed past the reef, Francis said he could see cranes and construction, but no people.

The Roosevelt is en route to its homeport in San Diego, after spending six months at sea supporting Operation Inherent Resolve.

The carrier’s appearance in the South China Sea would have had to happen anyway as it sailed home, said Rear Adm. Roy Kelley, commander of the Theodore Roosevelt Strike Group.