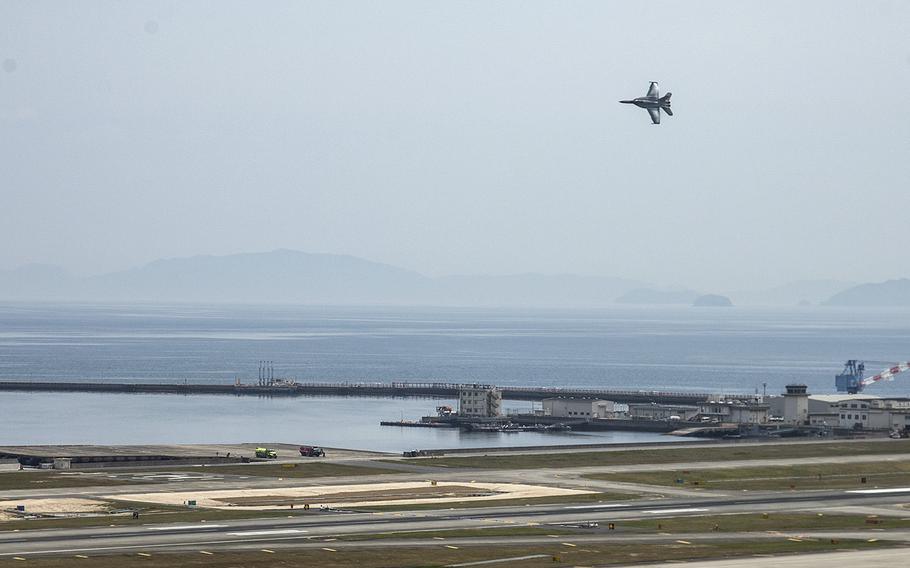 MARINE CORPS AIR STATION IWAKUNI, Japan — Noise levels increased when the Navy’s Carrier Air Wing 5 relocated to Iwakuni last year, but they rose within predicted bounds, according to a letter delivered Thursday to the Japan Ministry of Defense.

Complaints by residents around the base also increased, according to the letter, specifically on days before and after field carrier landing practice.

Gov. Tsugumasa Muraoka, of Yamaguchi prefecture, and 10 other elected representatives from communities surrounding the air station, including Iwakuni Mayor Yoshihiko Fukuda, delivered the letter to the central government in Tokyo asking it to take measures to minimize the noise and reduce residents’ concerns.

Excerpts from the letter, which analyzed the increase in noise at MCAS Iwakuni after the carrier air wing moved there from Naval Air Facility Atsugi in early 2018, were provided to Stars and Stripes by the Yamaguchi Prefectural Government.

The wing — composed of more than 60 aircraft, including F/A-18 Super Hornets, and 1,900 personnel — is attached to the aircraft carrier USS Ronald Reagan, which is now at sea.

According to the letter, the additional noise created “was within the range of noise prediction presented by the central government when the relocation was decided. Although there are differences depending on the time and area, the noise level has generally increased compared to the time before the relocation due to new U.S. military operations such as carrier qualification.”

Carrier qualifications allow Navy pilots to practice launching and recovering fixed-wing aircraft aboard an aircraft carrier prior to a deployment. Each pilot completes a minimum of 10 daylight landing and six nighttime landings.

Pilots fly carrier qualifications from the air station after several days of field carrier landing practice held offshore on Iwo Jima, which is now known as Iwo To in Japan.

“Noise and the issues flying around a base create an impact on the local community,” Navy Capt. Dwight Clemons, the assistant chief of staff for operations, plans and policy for Naval Forces Japan at Yokosuka Naval Base, said in an emailed statement to Stars and Stripes on Friday. “One of the things the U.S. Navy and the U.S. government takes very seriously is to lessen the impact on the citizens of Japan while balancing training and other requirements.”

The letter stated that the number of complaints from Iwakuni citizens increased in April and May before and after carrier landing practice. It specified an increase in noise at night during the carrier qualification period.

The area politicians also asked the defense ministry to have MCAS Iwakuni removed from a list of backup locations where the Navy conducts field carrier landing practice when inclement weather renders the airfield at Iwo Jima unusable. That practice has only been held on the main islands of Japan twice in the past decade, but not at Iwakuni.

The group met Thursday with Defense Minister Takeshi Iwaya, who told them the ministry will “continue to ask the U.S. side to give maximum consideration to safety and reduction of noise during trainings and to minimize the effect it will have on the residents,” according to a news release from Yamaguchi prefecture.

Iwaya also said that the defense ministry will ask U.S. forces to hold high-impact training activities like carrier landing practice on Iwo Jima as much as possible, according to the release.

He said the ministry will continue to work on finding a permanent site to replace Iwo Jima for field carrier landing practice as soon as possible, the release stated.

Although the island was originally designated as a temporary site, the Navy has been using Iwo Jima for landing practice since the late 1980s.