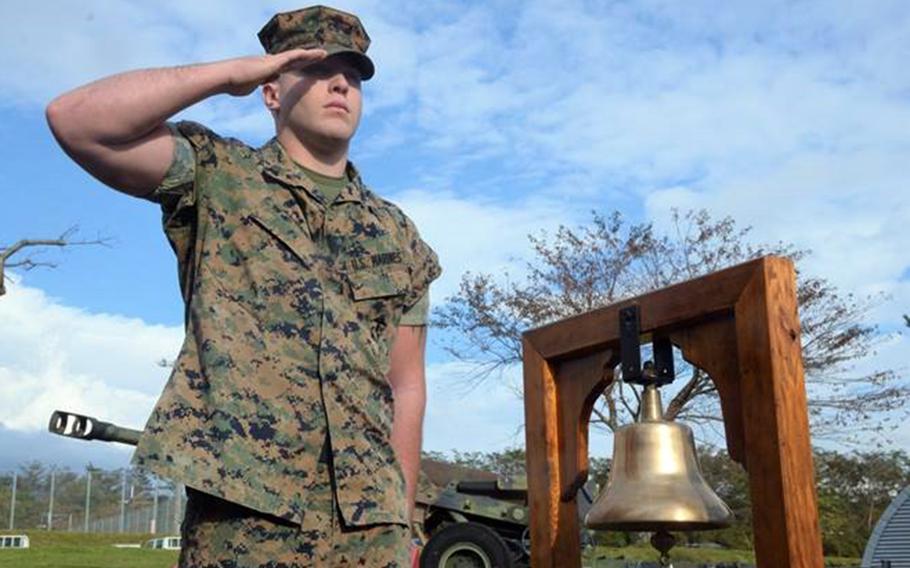 Buy Photo
A Marine salutes during a remembrance ceremony Friday, Oct. 19, 2018, for 13 Marines killed in a fire at Camp Fuji, Japan, in October 1979. (Christian Lopez/Stars and Stripes)

Buy Photo
A Marine salutes during a remembrance ceremony Friday, Oct. 19, 2018, for 13 Marines killed in a fire at Camp Fuji, Japan, in October 1979. (Christian Lopez/Stars and Stripes) 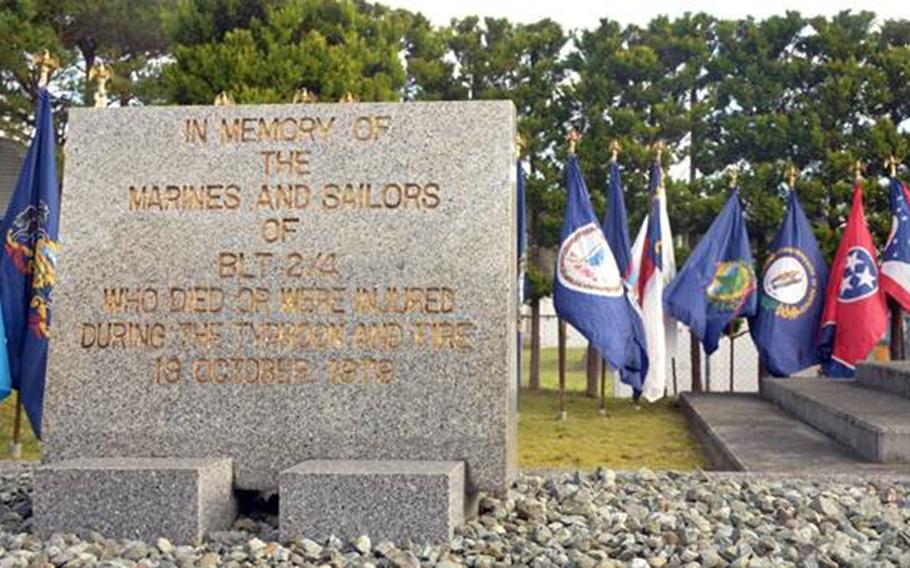 Buy Photo
A memorial honoring Marines and sailors either killed or injured in a 1979 fire is seen at Camp Fuji, Japan, Friday, Oct. 19. 2018. (Christian Lopez/Stars and Stripes)

The annual ceremony remembers a night in October 1979 when Typhoon Tip — the largest tropical cyclone ever recorded, according to The Weather Channel — created a living nightmare for nearly 1,200 Marines and sailors bunkered down in Quonset huts on base.

During those days, Camp Fuji hosted a farm that stored 5,000 gallons of fuel in rubber bladders behind the huts on higher ground, according to a speaker at Friday’s ceremony. Tip’s destructive winds, which reached up to 190 mph, ruptured one of the containers, causing fuel to gush down the hill and into the huts.

A kerosene heater inside one of the huts then ignited the river of gasoline. Then-Lance Cpl. Donald Fox said he saw the fire overtake the camp.

“I felt something like a hand of heat pick me up and push me out the door,” he said at the ceremony, during which each fallen Marine’s name was read followed by the ring of a bell. “All I saw inside was fire and darkness.”

American and Japanese firefighters worked together as the blaze raged for two hours, only to contain it and watch the fire burn itself out.

The injured were taken to local hospitals in Gotemba; the medical center at Yokota Air Base in western Tokyo; and flown to Brooke Army Medical Center in San Antonio, Texas, the speaker said. In all, 81 people were hurt and 13 Marines died in the incident.

“In the days after the fire, with little billeting left for Marines on base, many local residents of Gotemba opened their homes, and [Japan’s] Takigahara Garrison opened its gate to the U.S. Marines,” Col. Michael Reilly, Camp Fuji’s commander, said at the ceremony. “These acts of kindness and humanity should never be forgotten.”