Call them guardians: Seventeen airmen transfer to Space Force at US air base in Japan 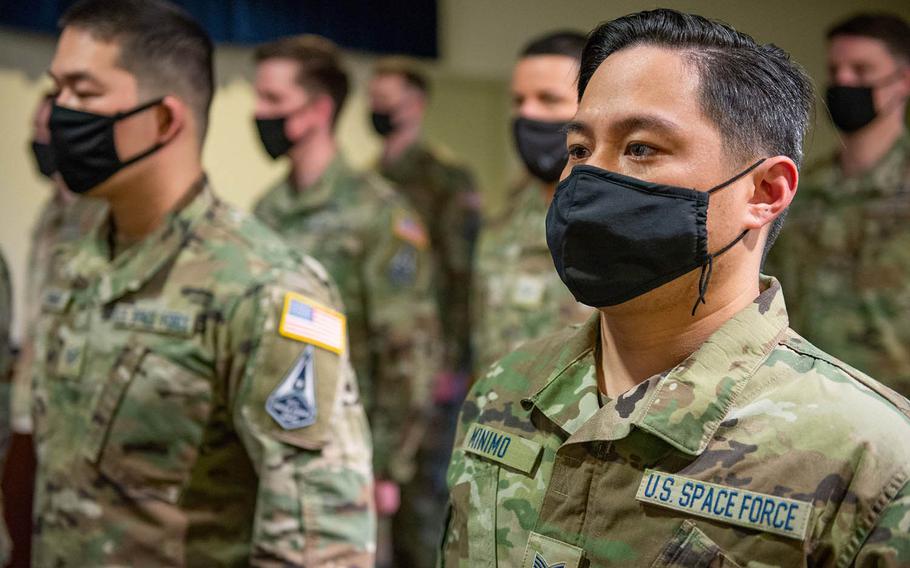 Images of the airmen transferring to the new service branch during a Feb. 17 ceremony were posted Tuesday by Yokota Air Base on the photo-sharing website Flickr. They show the new guardians in formation wearing space blue name tapes in front of a projection of the Space Force’s futuristic delta logo.

They join a service that was founded in late 2019 and charged with missions ranging from monitoring early warning systems that track potential threats to the U.S. homeland to ensuring the safety of American satellites.

“To help stand up a brand new branch of the armed forces is history in the making. These Airmen, no - Guardians, get to be a part of it,” said a message posted to Yokota’s official Facebook page on Tuesday.

“Currently [Space Force] transfers are only available for certain career fields, but as you might expect things are moving and changing quickly, so if you're interested consult with your chain of command.”

Yokota’s 374th Airlift Wing did not respond by Wednesday afternoon to questions posed Tuesday about the new guardians’ duties in the Japanese capital or their units. Eligible career fields include space and space systems operations, intelligence and cyberspace.

The first of 2,410 eligible airmen started transferring to the Space Force on Sept. 1. The service is expected to grow to some 16,000 service members in the coming years.

The Yokota airmen aren’t the first U.S. service members in Japan to transfer to the new service branch. Misawa Air Base, in the northeast of the country, on Dec. 16 posted a video on Facebook announcing the transfer of an airman there – Chief Master Sgt. Wendee Roberson.

The pair discussed strengthening cooperation between the Space Force and the Japan Air Self-Defense Force’s Space Operations Squadron, along with plans by the United States to send astronauts back to the moon by 2024.

Japan stood up the squadron in May with 20 members. Its mission involves keeping tabs on threats to Japanese satellites such as meteorites and space junk.

Raymond, during his Air Force career, was stationed at Yokota from 2010 to 2012. He served there as vice commander of 5th Air Force and deputy commander of 13th Air Force, which was deactivated and merged with Pacific Air Forces in September 2012, according to his official biography.

Yokota and Misawa are the only facilities in Japan where the military has indicated that it bases Space Force guardians.

However, military technology expert and Arizona State University engineering professor Braden Allenby, in an email Tuesday, said he expects to see the Space Force create overseas bases of its own.

Their configuration will depend on how the new service interacts with other elements of the U.S. and foreign militaries, he said.

It’s important for the Space Force to work with allies such as Japan for operational and symbolic reasons, Allenby said.

“In space, for example, there are ‘traditional’ concerns such as protecting space-based assets from space debris or deliberate tracking and attack by adversaries, and there are longer term potential challenges, such as working out an international governance system that enables exploration and exploitation of space even in a context of great power rivalry and conflict,” he said.