Bells, sirens and moments of silence at US bases in Japan mark 10 years since earthquake and tsunami 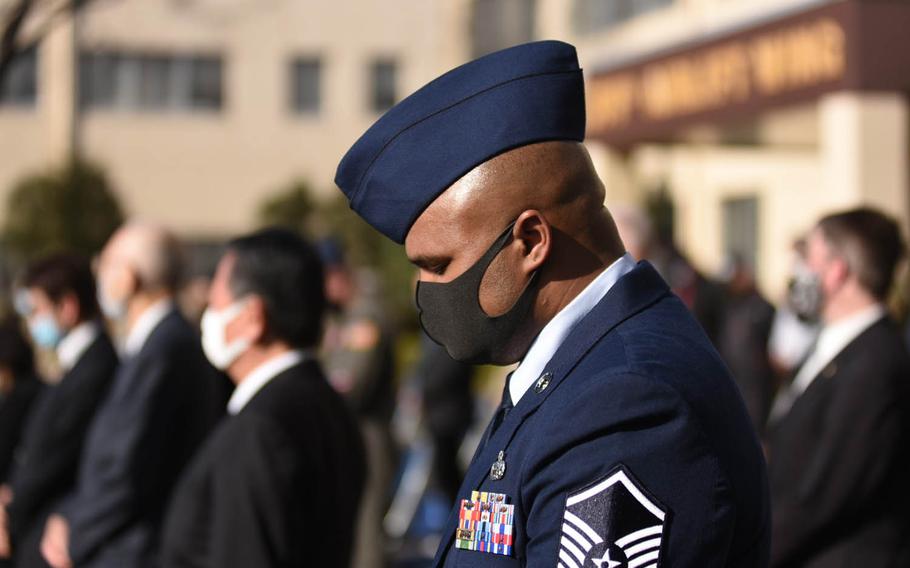 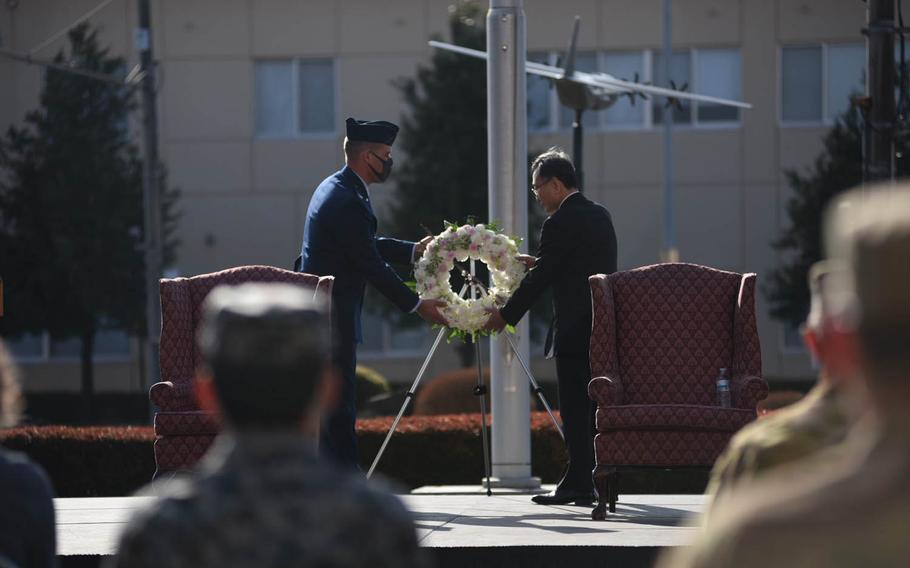 Buy Photo
Col. Andrew Campbell, commander of the 374th Airlift Wing, and Takahisa Matsuda, director of the North Kanto Defense Bureau, place a wreath in honor of the victims of the Great East Japan Earthquake, during a ceremony at Yokota Air Base, Japan, Thursday, March 11, 2021. (Akifumi Ishikawa/Stars and Stripes) 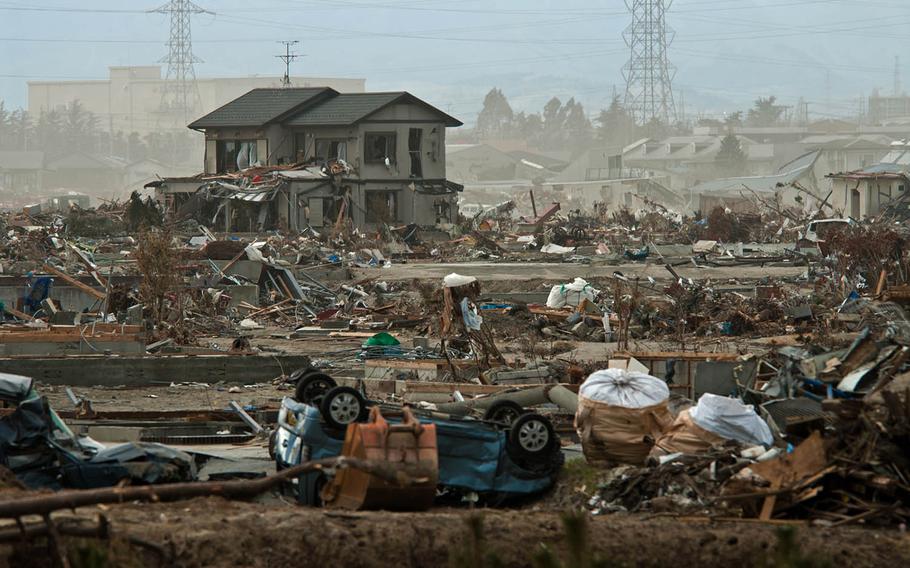 YOKOTA AIR BASE, Japan — A bell rang out 11 times at the home of U.S. Forces Japan in western Tokyo at 2:46 p.m. Thursday, marking a decade since the Great East Japan Earthquake shook the country.

Marine Corps bases on Okinawa sounded tsunami warning sirens while airmen gathered at Misawa Air Base in northeastern Japan for a moment of silence.

The tributes marked the moment the magnitude-9.0 earthquake — the biggest ever recorded in Japan — shook the country. It created a massive tsunami that inundated the northeastern coast, killing more than 19,000 and causing a meltdown at the Fukushima Daiichi nuclear power plant.

The memorials were also a reminder that more than 20,000 American troops worked alongside their Japanese allies to respond to the disaster.

“Our joint efforts hold a special place in the hearts and memories of both our peoples — a testament to the special bond and the unshakable friendship that is the Japan-US alliance,” the pair said.

Standing in front of the 374th Airlift Wing headquarters and backed by a UH-1 Huey helicopter and a red fire engine, wing commander Col. Andrew Campbell recalled how the Yokota community provided food and shelter to passengers of 11 jumbo jets diverted there from commercial airports after the quake damaged their runways.

In all, the wing deployed more than 1,000 personnel and flew more than 600 missions during Operation Tomodachi, delivering personnel, supplies and equipment to devastated areas, he said.

After the ceremony, Lt. Col. Ryan Wong, who flew nine C-130H sorties after the disaster, recalled seeing the battering that towns along the coast took from the wave.

“It was shocking to see it, but we were trained for humanitarian assistance and disaster relief,” he said.

Master Sgt. Joshua Brown, who flew eight sorties during Operation Tomodachi as a C-130H flight crew chief, remembered banking over the northeastern city of Sendai and seeing the damage.

“It was so much devastation,” he said.

The helicopter displayed at the Yokota ceremony was one of those that had flown over 100 missions during the disaster, Campbell said.

“Our Huey crews put themselves in harm’s way,” he said.

Yokota firefighter Nobohito Takeda helped deliver a fire engine to Fukushima so that it could be used to battle the reactor fires.

After Thursday’s ceremony, he recalled his concern about radiation as he approached the power plant.

“I saw so many Japanese emergency vehicles,” he said.

Another at the ceremony, Masahiro Shinozaki, from Yokota’s Mission Support Group, was charged with monitoring the radiation exposure of personnel during Operation Tomodachi.

Radiation levels in Tokyo were never dangerous but some of the exterior panels on aircraft that had flown through radiation were changed as a precaution, he said.