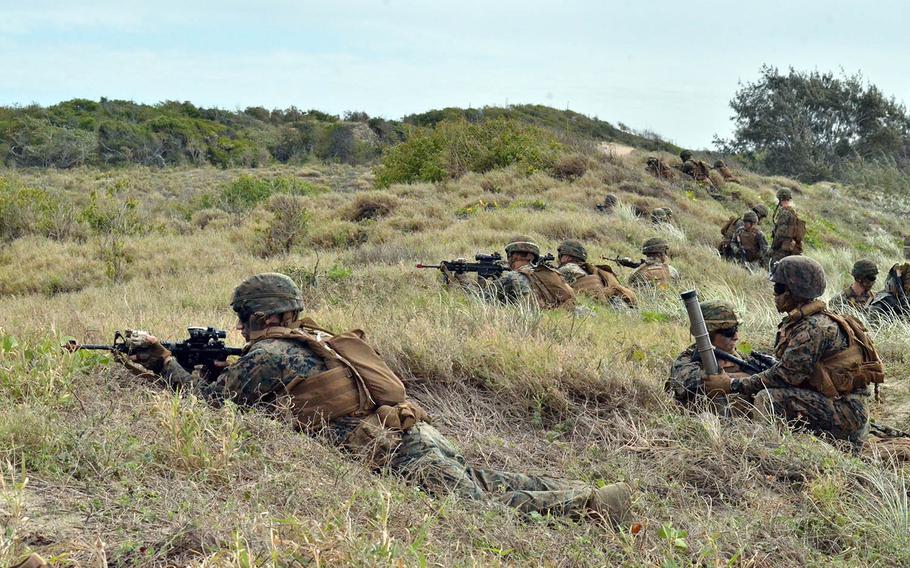 Buy Photo
U.S. Marines secure a beach landing zone near Bowen, Australia, during the large-scale Talisman Sabre exercise in July 2019. Australia will invest $582 million to improve bases and training areas in its Northern Territory that are used by a rotational force of U.S. Marines, the country’s Defence Department announced Wednesday. (Seth Robson/Stars and Stripes)

Australia will invest $582 million to improve bases and training areas in its Northern Territory that are used by a rotational force of U.S. Marines, the country’s Defence Department announced Wednesday.

Upgrades will be made to Robertson Barracks, home to Marine Rotational Force — Darwin during annual six-month deployments, as well as ranges at Kangaroo Flats, Mount Bundey and Bradshaw, where the Marines train, the department said in a statement.

The Marines’ rotation Down Under will be back at nearly full strength this year, with 2,200 Marines in the Northern Territory by June, according to Australia’s defense department. The onset of the coronavirus pandemic meant last year’s force was cut by more than half, well short of the 2,500 Marines who traveled there in 2019.

Australian Prime Minister Scott Morrison said, in the statement, that the base and range upgrades are part of nearly $6.2 billion in defense infrastructure work in the Northern Territory over the next decade.

“Working with the United States and Indo-Pacific neighbours, we will continue to advance Australia’s interests by investing in the Australian Defence Force, particularly across Northern Australia,” he said. “Our focus is on pursuing peace, stability and a free and open Indo-Pacific, with a world order that favours freedom.”

The country’s defense minister, Peter Dutton, said the upgrades will ensure that the Australian Defence Force delivers world-class training and engagement with allies and other nations through joint exercises, including with the Marines.

The announcement comes amid deteriorating relations between Australia and its largest trading partner, China.

Dutton, on Sunday, said a conflict between China and Taiwan “should not be discounted” and Australian Home Affairs Department Secretary Michael Pezzullo warned, the same day, that the “drums of war are beating” and that Australia must be prepared “to send off, yet again, our warriors to fight.”

The Northern Territory base and range upgrades are “critical to ensuring that our land combat capability is equipped with the cutting edge technology it will require to maintain our competitive advantage,” Dutton said in Wednesday’s statement.

Subject to parliamentary approvals, construction is expected to commence later this year with completion expected by mid-2026, the statement said.

The upgrades will provide better quality training options on a larger scale and in a wider range of environments, according to Ross Babbage, a former Australian assistant defense secretary.

“These new initiatives should help to make northern Australia an even more attractive location for many types of training and exercising by United States forces,” he told Stars and Stripes in an email Thursday.