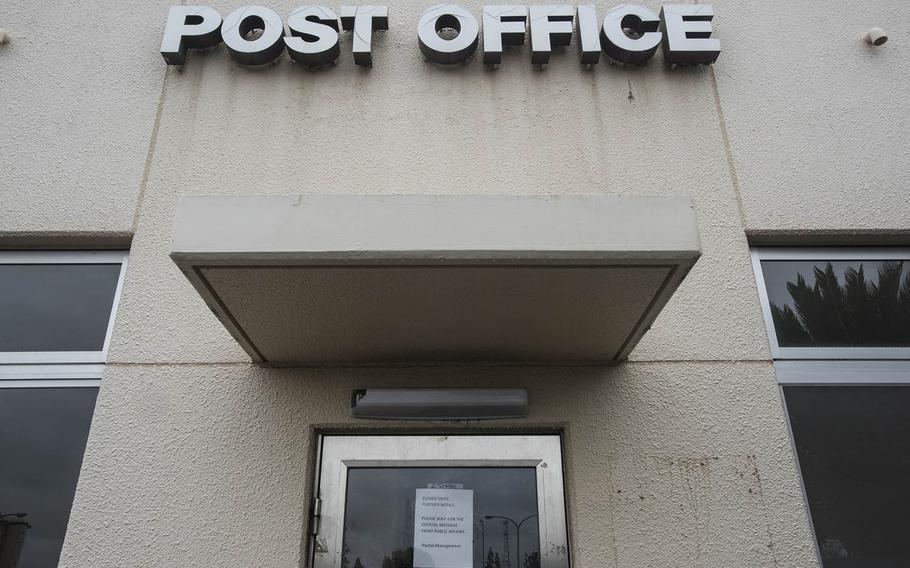 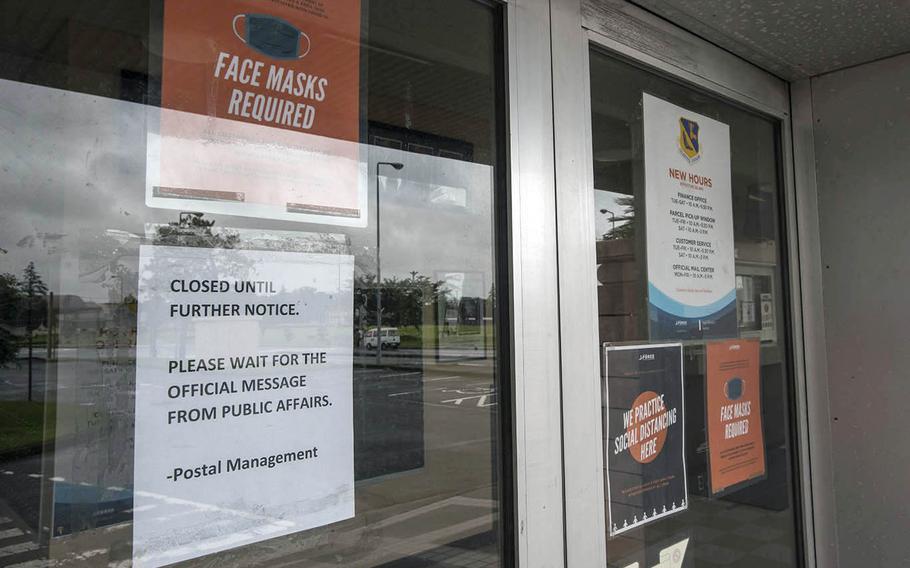 The post office was shuttered at Yokota Air Base in western Tokyo, Friday, July 17, 2020, a day after a worker there tested positive for the coronavirus. (Theron Godbold/Stars and Stripes)

YOKOTA AIR BASE, Japan — A postal worker at the home of U.S. Forces Japan in western Tokyo has tested positive for the coronavirus, Yokota’s 374th Airlift Wing announced on its Facebook page Friday.

The news came the same day Tokyo counted a new daily record of 293 infections, according to the national Asahi newspaper.

The Yokota individual, whose infection was confirmed Thursday evening, has been quarantined, the wing’s message said. Anyone who had close contact with the person has been identified and quarantined.

The post office will remain closed until further notice for “thorough sanitization and subsequent inspection,” the message said.

“It is important to note that entering a facility where there was a positive COVID-19 case does not automatically equate to exposure,” the post states, referring to the respiratory disease caused by the coronavirus. “A close contact is a person who was within 6 feet of an infected individual for more than 10 minutes.”

The infection was announced more than a month after Yokota reported the first case within its military community, a person who tested positive after returning from the United States June 12.

Farther to the south, the Army’s Camp Zama hasn’t reported a positive coronavirus case since June 25. However, it has been warning troops about off-base cases near the installation.

On Thursday, U.S. Army Garrison Japan posted alerts on its Facebook page informing troops about positive cases at a Starbucks and Yakiniku King barbecue restaurant not far from Camp Zama.

At nearby Naval Air Facility Atsugi, installation commander Capt. Lloyd Mack told troops in a letter Thursday that the base was approaching the end of a shelter-in-place ordered July 9 following the discovery of an undisclosed number of infections there.

“With treatment of the cases and a robust testing and quarantine process of close contacts we also anticipate completing final testing and deliberations with our preventative medicine and health professionals soon,” he wrote. “Once we complete that step and we deem there is no threat of community spread I plan to transition back to a form of our previous less-restrictive health posture.”

Things looked even brighter at Yokosuka Naval Base, where installation commander Capt. Rich Jarrett released a video message Friday announcing it’s been nearly two months since the base has seen an infection that originated in Japan.

Still, he said the community cannot become complacent as cases appear at other installations.

“Like many of you, I am not looking forward to the day when we have to reimpose stricter limitations on liberty,” Jarrett said. “We flattened our curve in Yokosuka, but it will return quickly unless we remain disciplined in our health-protection measures.”

Stars and Stripes reporters Caitlin Doornbos and Seth Robson contributed to this report.