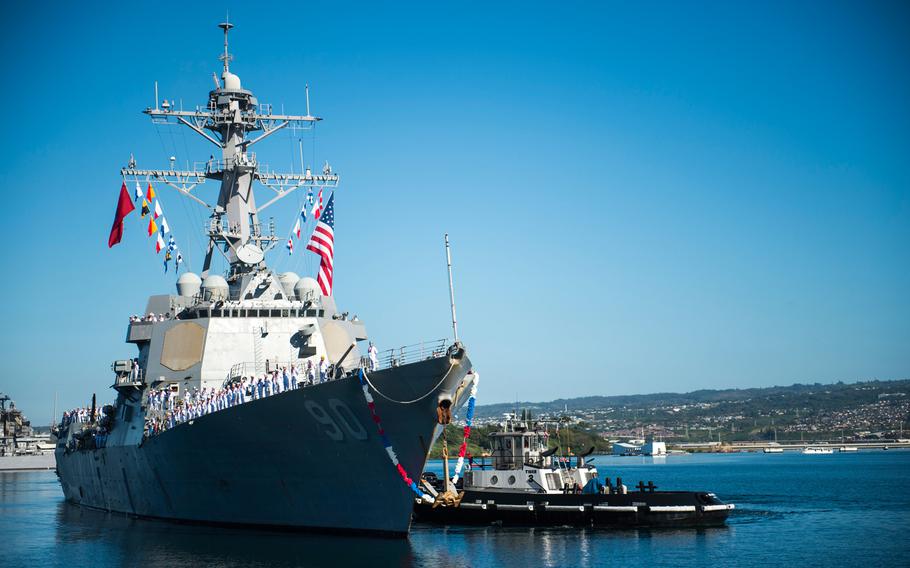 The guided-missile destroyer USS Chafee returns to Joint Base Pearl Harbor-Hickam Jan. 12, 2018, from an independent deployment to the Western Pacific and South America. (Navy Public Affairs)

FORT SHAFTER, Hawaii — The scheduled departure Friday of the USS Michael Murphy from Pearl Harbor was delayed due to bad weather conditions at sea, the Navy said Friday.

The Hawaii-based destroyer had been slated to sail from its home port to join the Carl Vinson Strike Group for deployment in the Western Pacific.

A new underway date for Michael Murphy has not been determined, the Navy said.

Meanwhile, the guided-missile destroyer USS Chafee returned home Friday to Pearl Harbor after completing an independent deployment to the Western Pacific and waters near South America, the Navy said.

While at sea, the Chafee conducted theater-security cooperation and maritime-presence operations with other Pacific nations, the Navy said.

With a crew of almost 350, the Chafee is designed to operate either independently or as part of a strike group. A maintenance crew and pilots from Helicopter Maritime Strike Squadron 37 served as air support for the ship for the entire deployment.

Its crew recovered nearly a ton of illicit narcotics while patrolling 4th Fleet waters, the Navy said. The ship was integrated into Carrier Strike Group 5 in support of the USS Ronald Reagan’s patrol of the 7th Fleet area of responsibility.

The Chafee was ported for 10 days in December in Singapore for maintenance in an arrangement that allowed the ship to get needed fixes outside Hawaii and Japan, the Navy said.

The ship was named after the late Sen. John Lester Hubbard Chafee, a Marine veteran who fought in the Battle of Guadalcanal during World War II and served as Navy secretary from 1969-72.

Its last deployment to the Western Pacific and South America was in 2015.