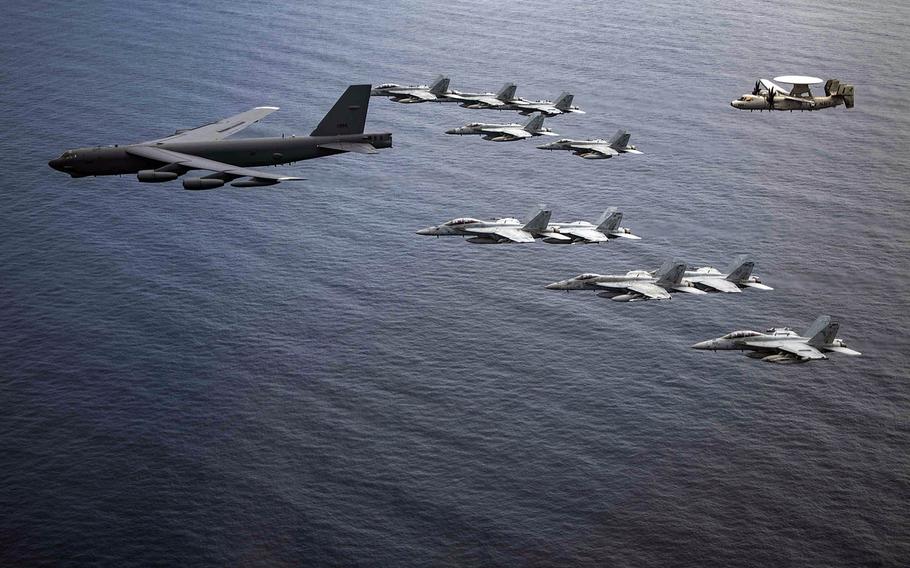 Aircraft from the USS Nimitz and a B-52 Stratofortress from Barksdale Air Force Base, La., fly in formation in the South China Sea in this undated phtograph. (Joseph Stephens/U.S. Navy)

Aircraft from the USS Nimitz and a B-52 Stratofortress from Barksdale Air Force Base, La., fly in formation in the South China Sea in this undated phtograph. (Joseph Stephens/U.S. Navy) 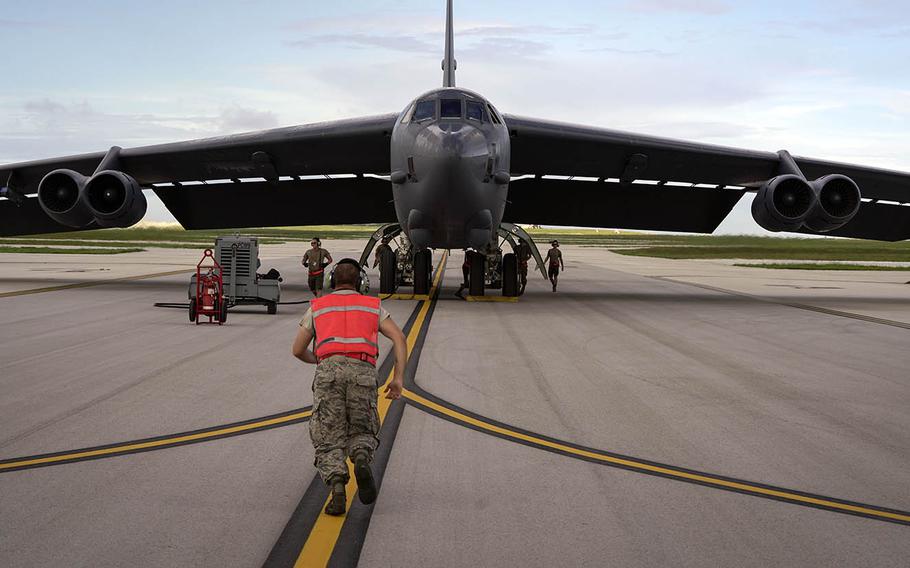 A B-52 Stratofortress bomber flew halfway across the world to join two aircraft carriers in an exercise Saturday in the South China Sea, Pacific Air Forces said in a statement Sunday.

While the B-52 was flying with strike fighters and electronic warfare jets from aircraft carriers USS Nimitz and USS Ronald Reagan over the Pacific, Air Force pilots flew B-1, B-2 and other B-52 bombers above Independence Day celebrations in Boston, New York City, Philadelphia and Baltimore.

“Back home we would celebrate the Fourth by launching fireworks,” Yeoman 2nd Class Chareese Knox, assigned to the Nimitz, said in a Navy statement on Saturday, “but nothing celebrates freedom like launching fighter jets from the middle of the ocean at night.”

“This sortie demonstrates our ability to reach out from home station, fly anywhere in the world and execute those missions, rapidly regenerate from a forward operating base and continue operations,” Duff said.

Chinese foreign ministry spokesperson Zhao Lijian said the exercises were performed "totally out of ulterior motives" and undermined stability in the area, according to the Associated Press. "Against such a backdrop, the U.S. deliberately dispatched massive forces to conduct large-scale military exercises in the relevant waters of the South China Sea to flex its military muscle," Zhao said at a daily briefing, the AP reported Monday.

Air Force bombers have appeared over the Western Pacific several times this year. Four times B-1B Lancers have overflown the South China Sea or teamed with Japanese Air Self-Defense or U.S. fighters for exercises since April. A pair of B-52s from Eielson Air Force Base, Alaska, flew to Japan in June for training.

“While the global strategic demand for our naval forces remains high, having several carrier strike groups currently at sea enabled us to pause for extended operations with the Nimitz team,” Wikoff said Monday in an email to Stars and Stripes.

Saturday’s exercise came after the Defense Department on Thursday expressed concern over the Chinese military conducting large-scale exercises around the Paracel Islands in the South China Sea from July 1-5.

“The designated area where the exercises are due to take place encompass contested waters and territory,” according to the DOD statement.

“Conducting military exercises over disputed territory in the South China Sea is counterproductive to efforts at easing tensions and maintaining stability.”

Official reports did not mention whether either of China’s two carriers took part. But China’s state-run newspaper Global Times wrote that the “South China Sea is fully within grasp of the” Chinese military and “any US aircraft carrier movement in the region is solely at the pleasure of the (Chinese military), which has a wide selection of anti-aircraft carrier weapons like the DF-21D and DF-26 ‘aircraft carrier killer’ missiles.’”

Navy Chief of Information Rear Adm. Charlie Brown responded to the article with a tweet Sunday: “And yet, there they are. Two U.S. Navy aircraft carriers operating in the international waters of the South China Sea.”

“The USS Nimitz and USS Ronald Reagan are not intimidated,” he added.

China views the South China Sea as its territorial waters and disputes the sovereignty over dozens of islands and reefs in it with several countries.

The DOD, in its statement, urged “all parties to exercise restraint and not undertake military activities that might aggravate disputes in the South China Sea.”

Unnamed Chinese analysts cited by Global Times said the Navy sending carriers into the same area where China held its exercises shows U.S. “hypocrisy and demonstrated that it is the real source of potential regional instability.”

Wikoff called the two-carrier exercise an “unambiguous symbol” of “our enduring commitment to regional stability and mutual defense agreements.”

Saturday’s exercise with the Nimitz and Reagan was the first time in eight years that the U.S. has sent two carriers to work together in the South China Sea.

This weekend’s exercise was also the third of its kind in the region in less than a month. The Nimitz and USS Theodore Roosevelt and the Nimitz and Reagan conducted dual-carrier operations in late June in the Philippine Sea.