Austin in Tokyo: US-Japan alliance will stay stronger than any adversary 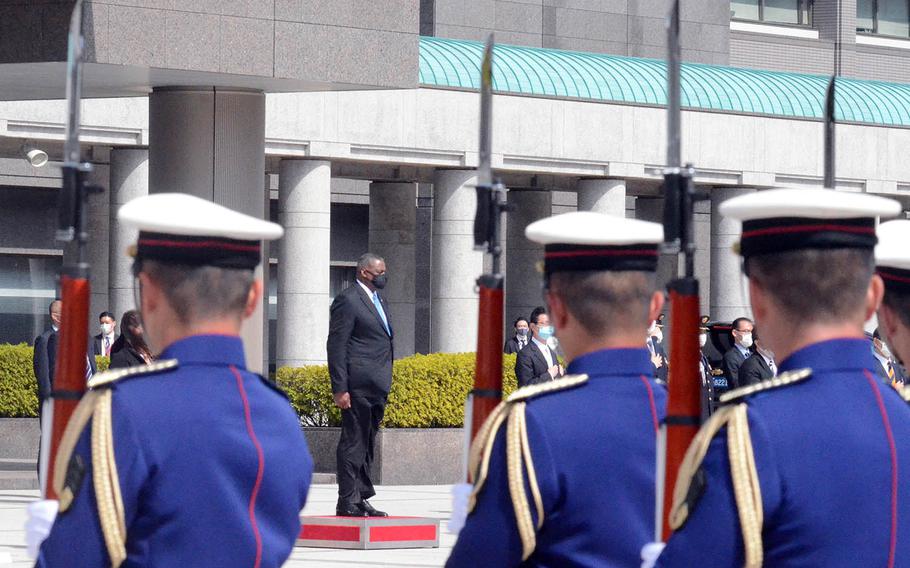 TOKYO — The United States and Japan can “outmatch any competitor” in the years ahead, Secretary of Defense Lloyd Austin told his Japanese counterpart Tuesday at the start of a series of high-level meetings.

On his first international trip since taking over as America’s top civilian military leader, Austin gave an upbeat assessment of the state of the alliance to Japanese Defense Minister Nobuo Kishi.

The alliance remains a cornerstone in addressing today’s demands and challenges as the countries work together to uphold a free and open Indo-Pacific, Austin said, as he, Kishi and a group of U.S. and Japanese generals and other officials met in a conference room at Japan’s Ministry of Defense in the Japanese capital.

“I am confident that working together we can meet any challenge and outmatch any competitor in the years ahead,” the defense secretary said.

Austin didn’t mention any competitors by name but, in a statement issued later in the day, the allies said China’s actions pose political, economic, military and technical challenges to the Japan-U.S. alliance and the global community.

The two countries, in the statement, also expressed concern over human rights in China, its growing assertiveness at sea and its new coast guard law, the report said.

“We will push back, if necessary, when China uses coercion and aggression to get its way,” he said Tuesday according to the Reuters news agency.

Tensions have risen this year between Japan and China over the disputed Senkaku islands. China in February gave its coast guard authority to fire at boats entering waters claimed by China, to which Japan responded by permitting its coast guard crews to fire on foreign ships attempting to reach the Senkakus.

Blinken and Austin travel to South Korea on Wednesday for talks with their counterparts in the defense and foreign ministries there, too.

In Tokyo, Austin and Kishi ahead of their talk reviewed members of the Japan Self-Defense Forces, who paraded in front of the ministry’s headquarters.

“Please thank your troops on our behalf for that spectacular show of professionalism that we just witnessed,” Austin told Kishi. “They are marvelous.”

It’s especially meaningful that the meetings are happening so close to the 10th anniversary of the Great East Japan Earthquake, Austin said of the triple disaster of March 11, 2011.

The magnitude-9.0 earthquake, the most intense ever recorded in Japan, created a massive tsunami that inundated the northeastern coast, killing more than 19,000 people and causing a meltdown at the Fukushima Daiichi nuclear power plant. More than 20,000 U.S. troops worked alongside their Japanese allies to respond to the disaster.

“It was a terrible event that we reacted to hand-in-hand as the closest of allies exemplified in the spirit of Operation Tomodachi,” Austin said.

The defense secretary offered condolences for the loss of a Japan Air Self-Defense Force student pilot who was killed along with a U.S. Air Force instructor when a trainer jet crashed in Alabama last month.

“Our hearts go out to both their families,” he said. “It is indeed a solemn reminder of the tremendous sacrifices of brave men and women in uniform that they make every day to keep our countries safe.”

Kishi, speaking through an interpreter, welcomed Austin to Japan and added his own praise of Operation Tomodachi and condolences for the pilots killed in Alabama.

“The security environment in the Indo-Pacific is becoming increasingly severe,” he said.

The pair planned to exchange views about regional affairs including China’s behavior in the East and South China seas, Kishi said.

The fact that Austin chose Japan for his first overseas trip as defense secretary sends a message about U.S. commitment to the region, he added.

“In order to make this message even stronger, I look forward to working with you to enhance the alliance’s capabilities,” he said.