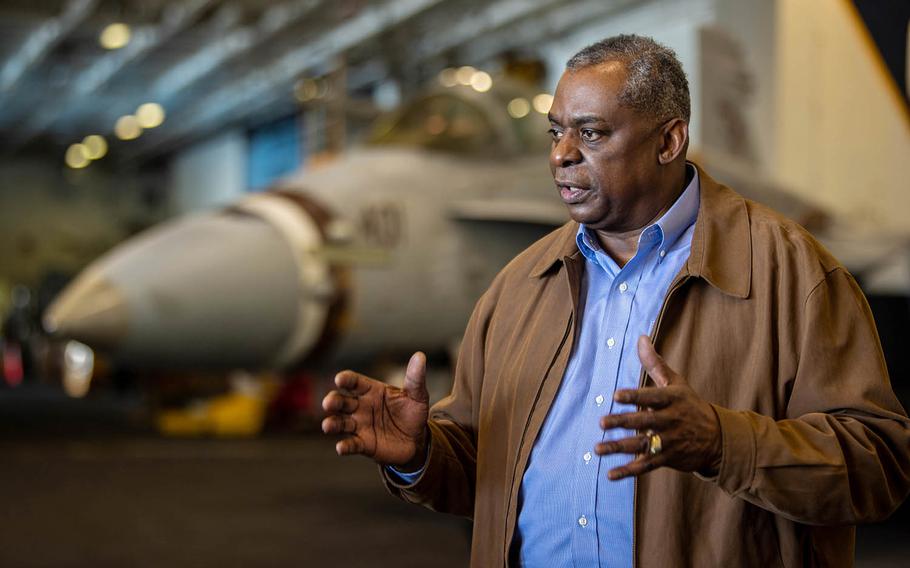 Defense Secretary Lloyd Austin begins his first overseas trip Saturday with visits to key allies and partners in the Indo-Pacific, with meetings planned with counterparts in Japan, South Korea and India, the Pentagon said Wednesday.

The choice of Asia for Austin’s inaugural trip underscores the growing importance of the region in both the Pentagon’s strategic planning and America’s economic interdependence with the Pacific.

“I’ll meet with my counterparts and other officials to discuss the importance of our alliances and partnerships, and together we'll reinforce the U.S. commitment to a free and open Indo-Pacific region,” Austin said in a tweet Wednesday.

The Pentagon’s national defense strategy has in recent years pivoted away from emphasizing counterinsurgency and the Middle East toward greater focus on so-called “great power” competition with China and Russia.

Testifying before the Senate Armed Services Committee this week, Adm. Philip Davidson, head of Indo-Pacific Command, said the U.S. needs to invest more in troops, missile detection and weapons in the region in response to China’s growing military capabilities.

“I see [China] developing systems, capabilities, and a posture that would indicate that they’re interested in aggression,” he said.

He will meet with troops and senior commanders while there, the Pentagon said.

He will then fly to Japan to join Secretary of State Antony Blinken for the U.S.-Japan Security Consultative Committee, informally called 2+2. That is being hosted by Japan’s Minister for Foreign Affairs Toshimitsu Motegi and Minister of Defense Nobuo Kishi, the Pentagon said.

The meeting, scheduled Monday through Wednesday, is intended to emphasize “that the U.S.-Japan Alliance has never been more resolute and resilient — the cornerstone of peace and security in a free and open Indo-Pacific in the face of long-term competition with China,” the Pentagon said.

Tensions have risen this year between Japan and China over the disputed Senkaku islands.

China in February gave its coast guard authority to fire at boats entering waters claimed by China, to which Japan responded by permitting its coast guard crews to fire on foreign ships attempting to reach the Senkakus.

The meeting is intended to underscore America’s “ironclad commitment” to the security of South Korea and emphasize the alliance as “a linchpin” of security in Northeast Asia, the Pentagon said.

Austin will then head to India to meet with Rajnath Singh, the minister of defense, and other senior national security leaders.

They will discuss ways to further advance cooperation made possible in 2016 when the United States designated India as a Major Defense Partner.

Mutual disdain over China’s desire to dominate the region has deepened defense ties between the U.S. and India, particularly over the past year.

Last summer, Indian and Chinese troops clashed in hand-to-hand combat on the disputed border between the two countries, leaving at least 20 Indian soldiers dead in the Galwan Valley. While the border has long been a point of contention between the countries, the skirmish was the first time that shots were fired since the two sides entered into a no-fire agreement in 1996.