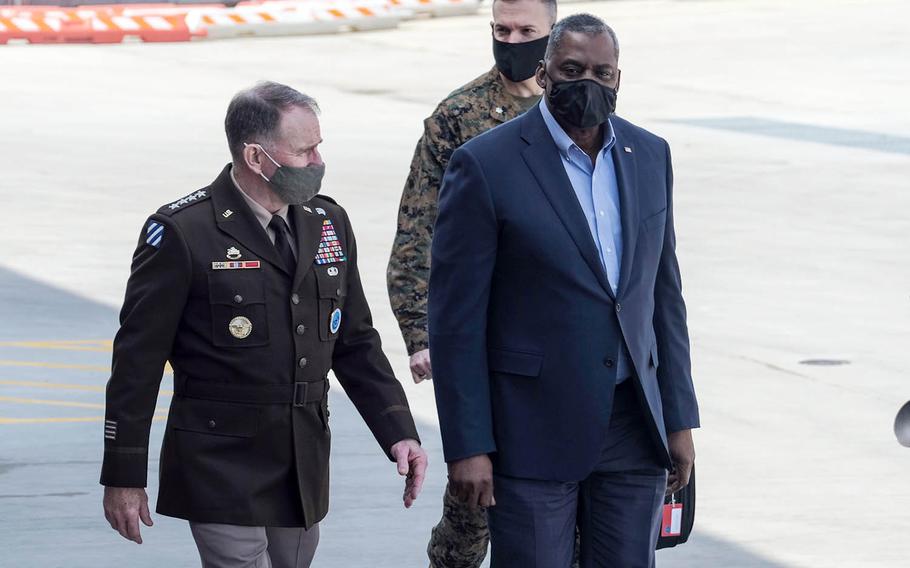 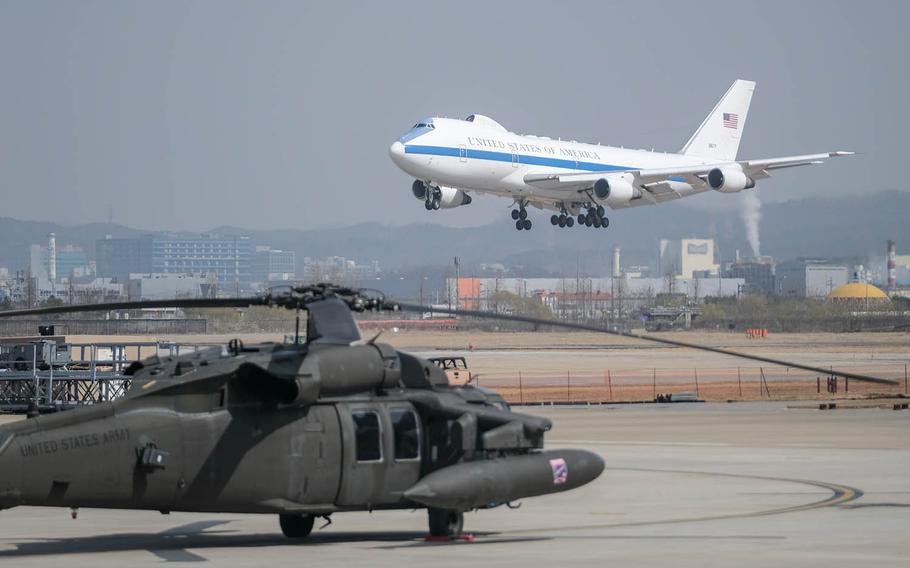 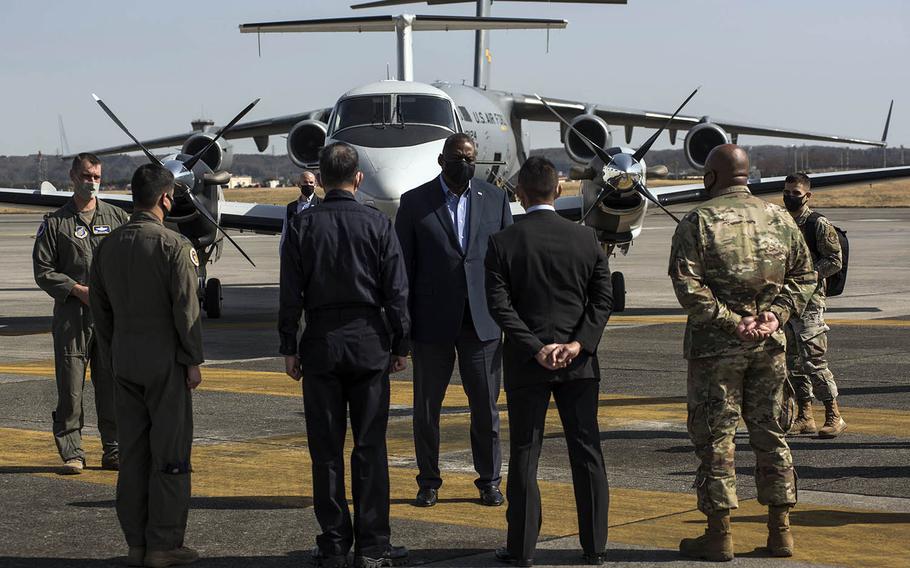 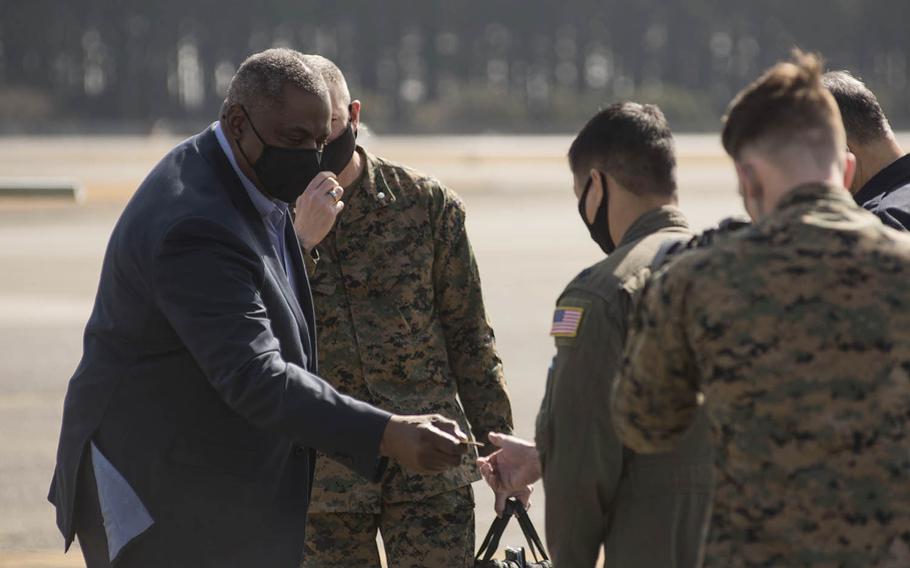 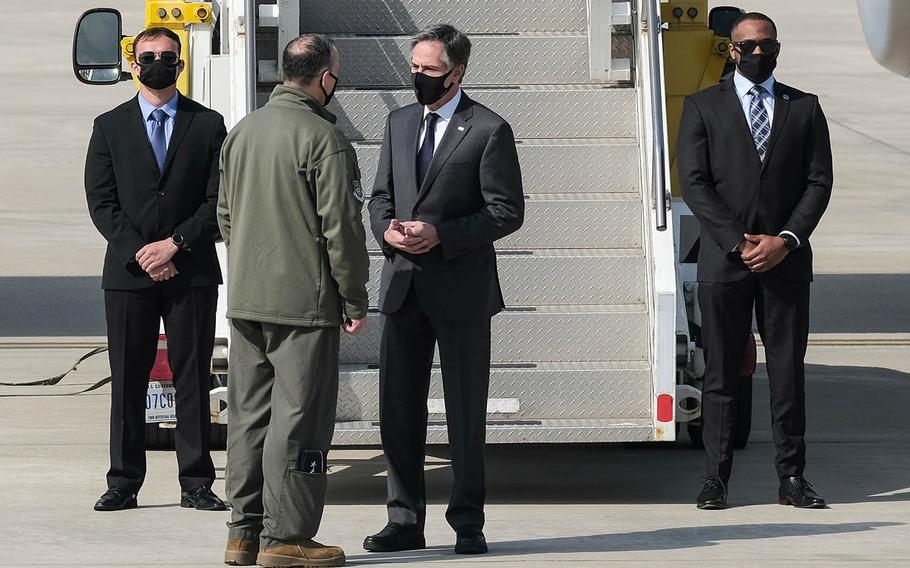 Defense Secretary Lloyd Austin touted the importance of the U.S.-South Korea alliance Wednesday as he kicked off two days of talks in Seoul that are likely to focus on Pyongyang and its growing nuclear arsenal.

The Pentagon chief was greeted by the commander of U.S. Forces Korea, Army Gen. Robert Abrams, after touching down just after noon at Osan Air Base, south of the capital. Austin was later joined by Secretary of State Antony Blinken, and the pair held separate discussions with their South Korean counterparts, Minister of Defense Suh Wook and Foreign Minister Chung Eui-yong.

Given the unprecedented challenges posed by North Korea and China, the U.S. alliance with South Korea has never been more important, Austin said ahead of his meeting with Suh, according to the Yonhap news agency.

"I am here today to reaffirm the United States' commitment to the defense of [South Korea]," he said, according to the report. "You and I can both agree that military readiness is a top priority, and that our combined readiness must ensure that we are ready to fight tonight, if needed."

Referring to a recent agreement that gives a 13.9% boost to the amount South Korea pays to support U.S. troops on the peninsula, Austin said the deal reflects President Joe Biden's "commitment to reinvigorating and modernizing" alliances around the globe, according to Yonhap.

Describing the alliance as the "linchpin" of peace and stability on the peninsula and beyond, Suh said links between the two countries have developed "in a reciprocal manner from the start of the Biden administration," the report said.

"Over the course of the development of the alliance, it is of utmost importance to maintain our combined defense posture and the formidable deterrence against North Korea,” Suh said, according to Yonhap. “Going forward, we will continue to further strengthen our bond as a military alliance.”

The four ministers will meet as a group Thursday during so-called 2+2 talks before Austin and Blinken visit South Korean President Moon Jae-in at the Blue House, his official residence in Seoul, that afternoon, according the Chosun Ilbo newspaper.

Afterward, Austin and Suh plan to pay tribute to fallen heroes at a state cemetery in Seoul, Yonhap reported, and the U.S. defense secretary is expected to meet with American troops stationed on the peninsula on Friday.

Threat to peace, stabilityBlinken and Austin traveled to the peninsula from Tokyo, where they met with their Japanese counterparts Tuesday during the U.S.-Japan Security Consultative Committee, also referred to as 2+2.

“North Korea’s arsenal poses a threat to international peace and stability,” Austin and Blinken said in a joint statement following those talks.

Nuclear-armed Pyongyang, claiming it possesses the “world’s most powerful weapon,” showed off a new submarine-launched intercontinental ballistic missile during a parade in January. However, the USFK commander, in written testimony to the House Armed Services Committee this month, said North Korea’s claims about the missile’s capabilities aren’t evidence of a viable new nuclear weapon.

The ministers’ Tokyo statement called for complete denuclearization of the Korean Peninsula.

“Trilateral cooperation among the United States, Japan, and [South Korea] is critical for our shared security, peace, and prosperity in the Indo-Pacific region,” the statement said. North Korea, in its first statement geared toward the Biden administration on Tuesday, warned the U.S. not to ruffle any feathers.

"If [the U.S.] wants to sleep in peace for coming four years, it had better refrain from causing a stink at its first step," North Korean leader Kim Jong Un’s sister, Kim Yo Jong, said in a statement published Tuesday in the state-run Rodung Sinmun newspaper.

U.S. officials are worried that North Korea could resume missile tests after a three-year break in response to the drills, Politico reported Wednesday, citing anonymous sources.

‘Part of a big team’Before flying to South Korea on Wednesday morning, Austin met a group of service members and civilians at Yokota Air Base, the home of U.S. Forces Japan in western Tokyo.

“It’s really great to lay eyes on you,” he told troops lined up on a ramp near his aircraft.

Austin praised them as representatives of America and for continuing their mission during the coronavirus pandemic.

“You are what it is all about and there are 3 million more of your comrades spread around the globe who are working hard just like you are,” he said. “We are all part of a big team.”

Col. Andrew Campbell, commander of Yokota’s 374th Airlift Wing, introduced Austin to a pair of airmen and two Japanese civilian workers who were involved in Operation Tomodachi, the U.S. response to the earthquake and tsunami that struck northeastern Japan in March 2011.

“I appreciate your courage,” Austin told them. He handed challenge coins to each in the group, which included a pilot and crew chief who flew missions over the disaster zone, a firefighter who delivered a firetruck from Yokota to emergency personnel struggling to control meltdowns at the Fukushima Daiichi Nuclear Power Plant and a member of Yokota’s Mission Support Group who monitored radiation exposure during the crisis.