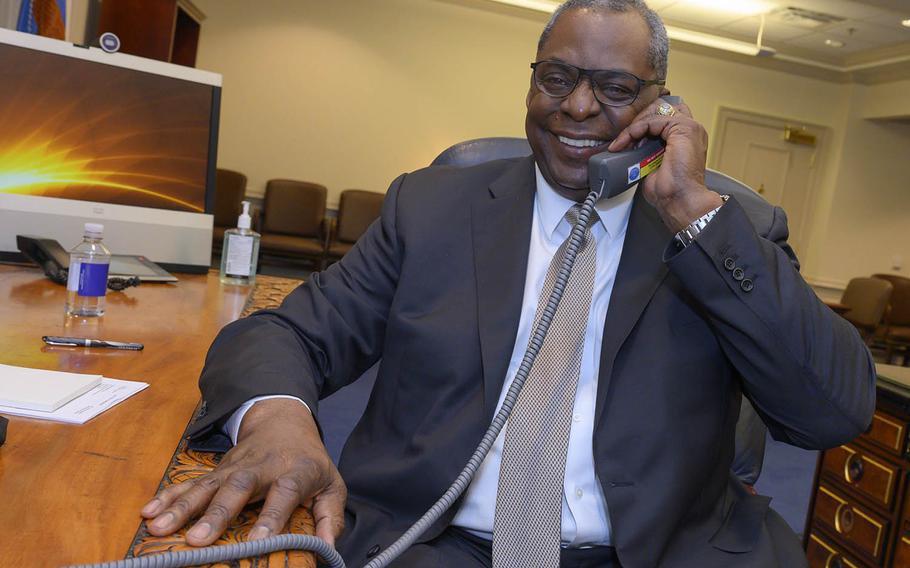 Newly installed Defense Secretary Lloyd Austin reaffirmed the “unbreakable alliance” between the U.S. and Australia during his first official phone call to the country’s defense minister, according to a Pentagon statement Tuesday.

The discussion with Australian Minister of Defence Linda Reynolds took place a day after the retired Army general was ceremonially sworn in as the United States’ 28th defense chief and the first Black man to serve in that role.

“They reiterated their support for like-minded approaches to address security challenges throughout the Indo-Pacific region,” the Pentagon said.

The discussion follows Austin’s calls Saturday to counterparts in South Korea and Japan and another discussion in November between then President-elect Joe Biden and Australian Prime Minister Scott Morrison, during which the pair also committed to strengthening their nations’ alliance.

Last year, 1,200 Marines trained in Australia’s Northern Territory on an annual six-month rotation. The contingent was half as large as planned but went ahead despite the coronavirus pandemic, which forced the cancellation of exercises with other countries in the region such as the Philippines.

Now, the U.S. and Australia are preparing for Talisman Sabre, a large-scale, multinational exercise due to kick off in the Australian state of Queensland in late June.

Both nations are concerned about China’s rapid expansion of military capability and both are engaged in a trade war with the communist nation. In November, after the Morrison government called for an independent inquiry into the origins of the coronavirus, China banned imports of Australian coal worth $14 billion annually, according to The Australian newspaper.

Austin and Reynolds acknowledged the close alignment in both nations’ perspectives and priorities in addressing regional and global security concerns, according the Pentagon said.

“Secretary Austin emphasized the importance of maintaining a free and open Indo-Pacific, founded on existing international law and norms in a region free of malign behavior,” the statement said.

The pair committed to sustaining progress on alliance priorities, including outcomes from the 2020 Australia-U.S. Ministerial meeting.

In Washington, D.C., in July the two countries agreed to cooperate on pandemic recovery and counterterrorism and to help Pacific Island countries through advice, budget support and high-quality infrastructure investment.

Then U.S. Secretary of State Mike Pompeo and Secretary of Defense Mark Esper, Australian Minister for Foreign Affairs Marise Payne and Reynolds expressed concerns about China’s suppression of democracy in Hong Kong, oppression of ethnic minorities in Xinjiang and the occupation of territory in the South China Sea. They also noted their support for Taiwan’s membership of international organizations and concerns about malicious behavior in cyberspace and intellectual property theft.