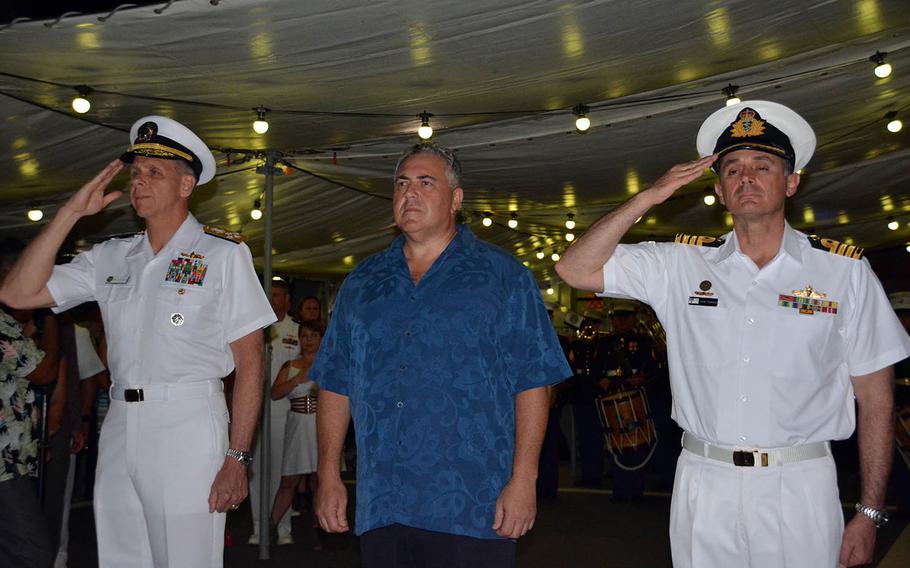 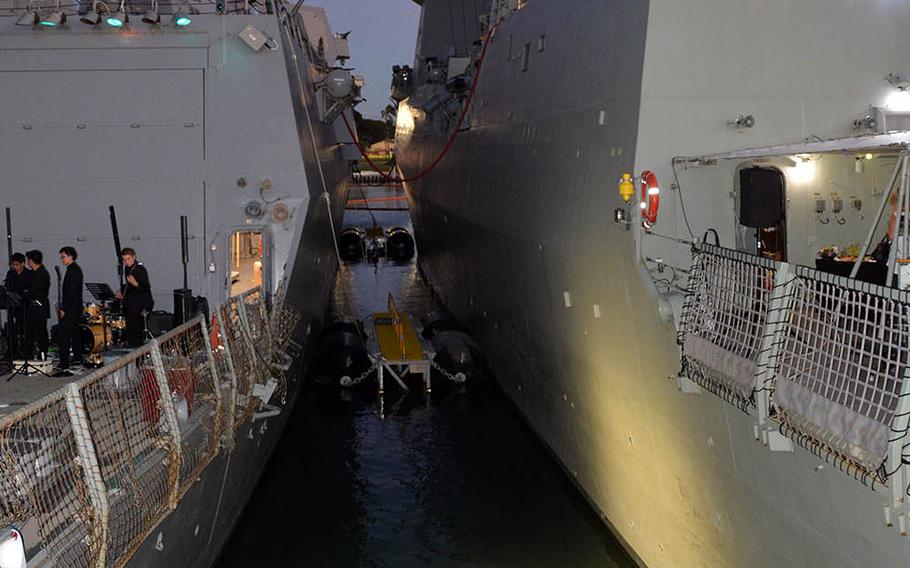 The destroyers USS Wayne E. Meyer, left, and HMAS Hobart float side by side at Joint Base Pearl Harbor-Hickam, Hawaii, Sept. 18, 2018. (Wyatt Olson/Stars and Stripes) 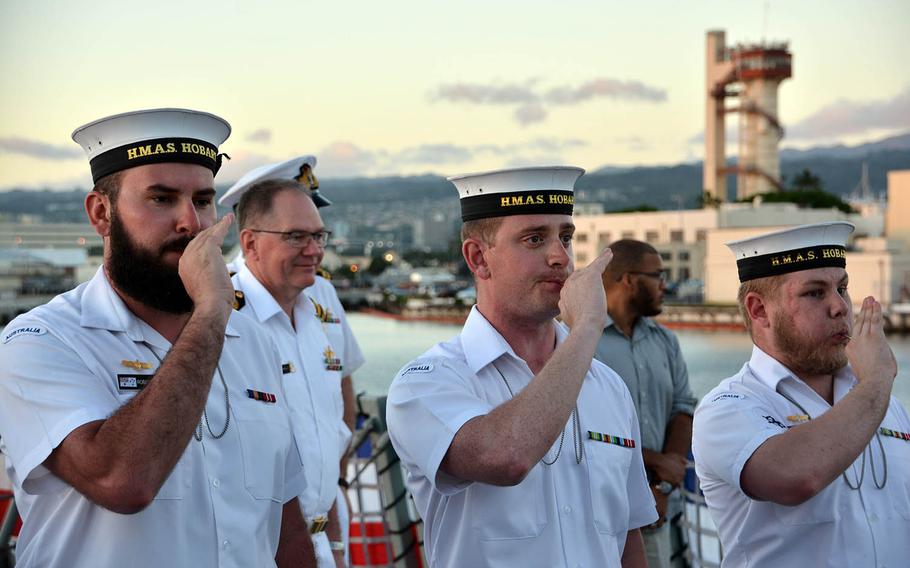 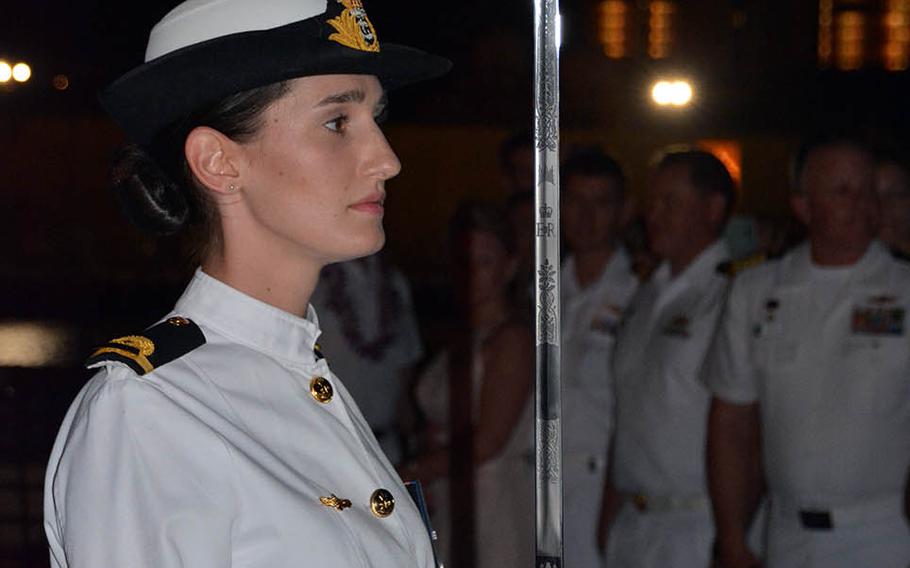 An Australian sailor conducts a ceremonial sunset aboard the HMAS Hobart while docked at Pearl Harbor, Hawaii, Sept. 18, 2018. (Wyatt Olson/Stars and Stripes) 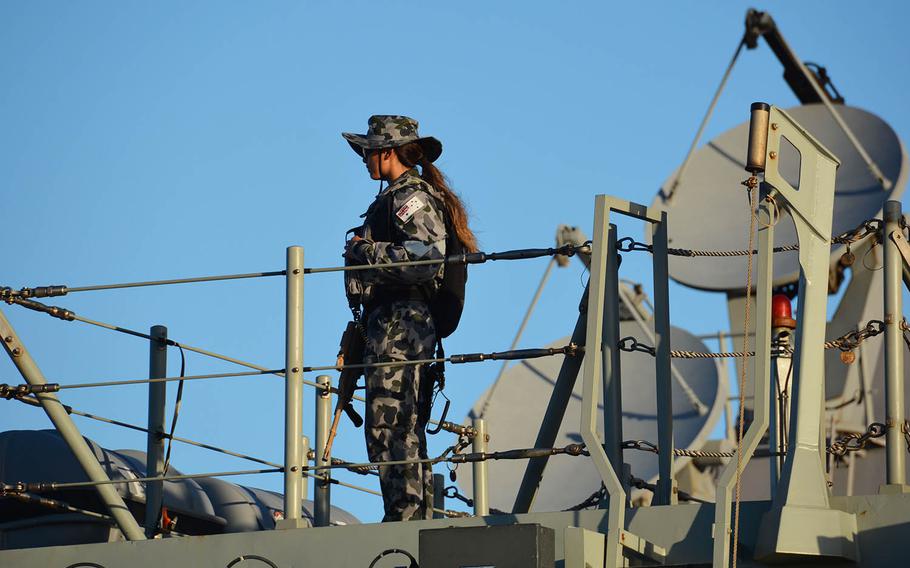 An Australian sailor stands high above the deck of the HMAS Hobart, where Americans and Australians gathered to celebrate a century of "mateship," Sept. 18, 2018. (Wyatt Olson/Stars and Stripes)

JOINT BASE PEARL HARBOR-HICKAM, Hawaii — Australia’s ambassador to the United States relishes the story of loyalty and insubordination underpinning the century-long military camaraderie between the two nations.

Ambassador Joe Hockey related the tale to a gathering of Australian and American sailors Tuesday as he stood aboard the HMAS Hobart docked beside the USS Wayne E. Meyer at Pearl Harbor. Guests nibbled on seared kangaroo skewers and Tasmanian salmon during the event, a celebration of 100 years of “mateship” between two armed forces that first fought side by side in 1918 during World War I.

After five years in the trenches of that war, Australia was in dire straits, Hockey said.

“Australia had by that stage mobilized nearly 10 percent of its population,” he said. “We’d suffered a 60 percent casualty rate.”

In the spring of 1918, Australian Gen. John Monash, commander of 4th Australian Division, had been directed to take the town of Hamel, France. So depleted were his ranks, Monash was granted his request for integration of 10 companies of American soldiers — still relatively green because the U.S. had joined the war only a year earlier.

“The Australians and Americans trained together, and they became very close buddies and friends — mates, as we say,” Hockey said. But the commander of American forces, Gen. John Pershing, balked at the idea of Americans fighting under a foreign general and ordered the soldiers out of the planned Hamel campaign.

“True to the American spirit, the American doughboys started to take off their uniforms and put on Australian uniforms,” Hockey said. “They said, ‘We are not going to walk away from our buddies.’”

Ultimately, Pershing gave in and three American companies fought in the Battle of Hamel – commenced on July 4 at Monash’s direction – considered by some historians to be a key turning point in World War I.

“That’s what mateship is: standing beside each other in the darkest of hours, being honest with each other, loyal to each other,” he said. “When either one is under threat, we fight to the death.

“We’re the only country on Earth to have fought side by side with the United States in every single major conflict. In World War I, you stepped in and really turned the war and ended what was meant to be the war to end all wars.”

Adm. Philip Davidson, commander of U.S. Indo-Pacific Command, told the gathering that America and its allies and partners in the region today face “profound security threats,” among them being terrorists in the Philippines, the North Korea regime and China’s attempts to dominate.

“I will be totally transparent with you,” he said. “China is moving around the region with an open pocketbook, greasing the region with money like no other adversary we’ve ever faced.”

This was the HMAS Hobart’s first foreign port visit since it was commissioned a year ago, Capt. John Stavridis, its commander, said.

The air warfare destroyer is Australia’s newest warship, the first to be armed with the Aegis combat system. The Hobart will now sail to San Diego to conduct combat system qualification trials.

“I feel a deep sense of history standing here on the HMAS Hobart in Pearl Harbor,” Hockey said of the third ship to carry that name.

“In many ways, the name reflects the history of the relationship between Australia and the United States,” Hockey said. The first was commissioned just before World War II and served side by side with American ships in the Battle of the Coral Sea and at Guadalcanal. The second was sent to assist the U.S. during the Vietnam War.

For Tuesday’s “mateship” gathering, the third and newest Aegis-armed Hobart was tethered side by side to the American ship named after Rear Adm. Wayne E. Meyer, known as the “Father of Aegis.”