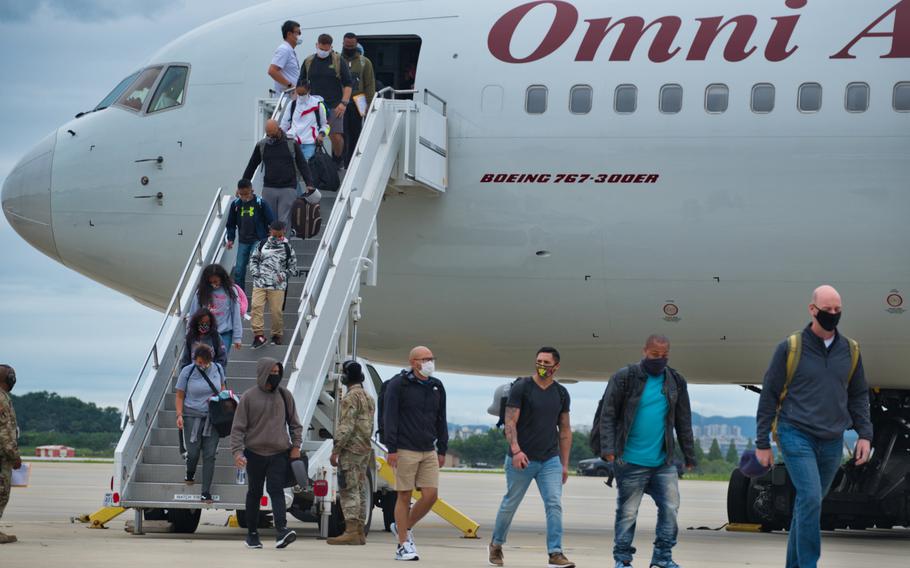 Service members and their families depart a Patriot Express flight from the United States at Osan Air Base, South Korea, July 14, 2020. (Matthew Keeler/Stars and Stripes)

SEOUL, South Korea — The Army will require soldiers and family members to test negative for the coronavirus before leaving the United States and to self-quarantine for two weeks before the journey, officials said Friday.

The new guidelines were to take effect on Aug. 21 amid concerns that troops and their families may be exposed to the virus or contagious themselves while in transit after the Pentagon lifted a travel ban for many locations.

Personnel must take the test on the 11th day of the two week pre-travel restriction of movement, less than 72 hours prior to departure from the United States, the Army said

The new requirements, which apply to personnel traveling on military and commercial flights, may mean that soldiers have to undergo two periods of quarantine if one is also required upon arrival, a spokeswoman told Stars and Stripes.

“The Army seeks to reduce risk of COVID-19 transmission during official travel from the U.S. to international destinations across the globe, acknowledging that additional risk mitigation measures may be required upon arrival at host nation destinations,” Col. Catherine Wilkinson said in an email.

The order doesn’t specify the type of test, but the Army’s currently approved test is the PCR test, she added. Polymerase chain reaction tests analyze the genetic composition of the virus from a nasal or throat swab.

The order, known as FRAGO 9, initially had been due to start Friday but was pushed back to provide time to adjust and prevent confusion among service members already en route, officials said.

“With FRAGO 9, it only applies in terms of the ROM or the quarantine, at any camp, post, or station back in the States after the 21st of August,” Bills said in a video posted Friday on the command’s Facebook page.

“Please continue your travel; we look forward to you joining our team,” he said, adding any questions should be referred to individual chains of command or the Eighth Army, which has its headquarters on Camp Humphreys.

Many service members have tested positive for the virus after arriving at their destination, suggesting they either had it before getting on the plane or contracted it during their travels.

The issue has prompted concern in South Korea, where 115 troops, dependents and civilian employees have received positive results after traveling to the divided peninsula since mid-April.

U.S. Forces Korea insists the patients pose no risk to the general population because of a mandatory testing and two-week quarantine that begins as soon as they arrive to reduce the risk of the virus spreading.

However, local South Korean officials in communities near the main base have called for troops to be tested before they get on the plane.

The South has sharply lowered its daily count but continues to struggle with cluster infections and imported cases.

The problem isn’t unique to South Korea, but few other commands have implemented such a rigorous system or publicized the incoming cases.

The Defense Department also outlined new coronavirus travel guidance in a memorandum released Thursday but without the date or specific mention of the tests. It said the restriction of movement meant people should stay in their residence for 14 days before travel and limit close contact with others unless the command or host nation has a similar requirement upon arrival.

“Only one ROM is required, either before travel or after arrival, unless otherwise required by applicable (host nation) procedures,” the memo said. The Army’s new risk mitigation measures “complement, and in some cases exceed,” those outlined in the Pentagon’s latest guidance, Wilkinson said.