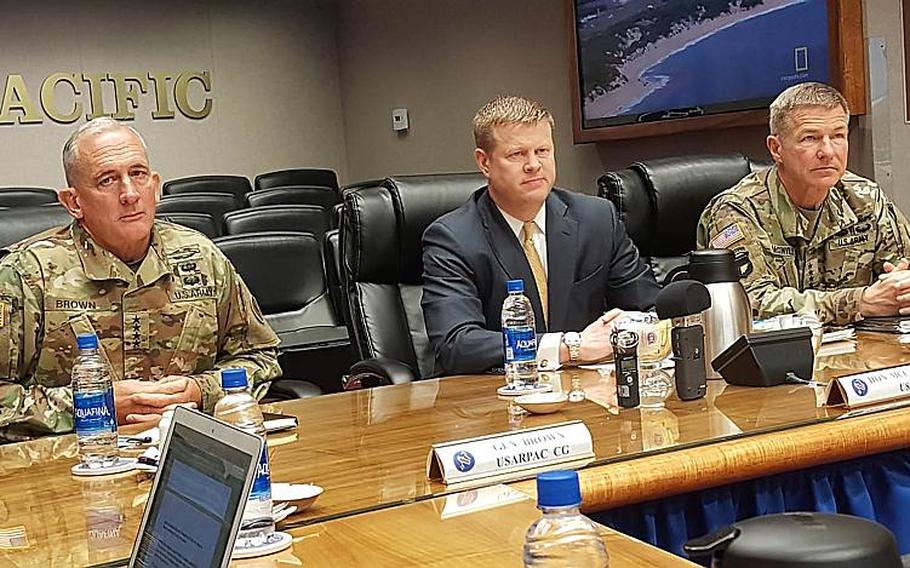 FORT SHAFTER, Hawaii — The Army plans to rotate thousands of soldiers from the mainland through short-term Pacific deployments in pursuit of becoming a more expeditionary force, Army officials said Tuesday.

“We will bring forces from [the mainland] over,” he said during a media roundtable at U.S. Army Pacific headquarters that included Army Under Secretary Ryan McCarthy and Gen. James McConville, vice chief of staff of the Army.

Brown said the number of troops to be tapped annually has not yet been set and would vary depending upon circumstances and the preferences of allies and partner nations hosting the troops.

“It would be a division headquarters and several brigades — you know, 5,000, 10,000 rotating over,” he said. “I would hesitate to throw a number out. It’ll depend on the scenario. It’ll depend on the exercise. There will be a continued focus on the assigned forces staying and the additional forces to come.”

“We’re talking about moving troops into a place with certain capabilities based on the partners we’re dealing with — move them out and move them back,” he said. “And then have the agility to move around the globe and in this theater the way we need to in response to our partners.

“They’re expeditionary. They’re rotational. They’re not long-term. They’re not permanent. But we can move them the way we need to, depending on the mission requirements.”

The beefed-up rotations would dovetail with U.S. Army Pacific’s evolving plans for Pacific Pathways and the new Multi-Domain Task Force.

Pacific Pathways, which launched in 2014, strings together already established Army exercises with allies and partner nations throughout the Pacific as a way of keeping U.S.-based troops and equipment deployed beyond the International Date Line for extended periods.

During the first several years, the rotations were a matter of a few weeks.

This winter, soldiers spent 3 1/2 months in Thailand and are now in the Philippines for four months of joint training, Brown said.

“Next year it will be six months,” he said.

The Army’s Multi-Domain Task Force program was piloted in the Pacific and this year is moving on to Europe for its second phase.

During the Pacific pilot, an artillery brigade stood as fires headquarters while integrating with an intelligence, cyber, electronic warfare and space detachment. The task force was first tested at a ship-sinking exercise during last summer’s Rim of the Pacific drills in Hawaii.

Army Chief of Staff Gen. Mark Milley has since directed the Multi-Domain Task Force be built up to counter potential attempts by adversaries to deny access in those domains by U.S. forces.

Brown said the multidomain concept is crucial because any conflict scenario in the Pacific would require a “joint solution” involving all service branches.

“Any issue that would develop in the South China Sea, all the forces are going to have to work together to be successful to handle that," Brown said. “Nobody’s asking for that. Competition doesn’t mean conflict; we don’t want that. But in any scenario you can come up with in the Pacific, it would be a joint solution.”

Positioned on any of the theater’s 25,000 islands, the Army could potentially enter any fray with long-range weapons.

“Those islands make a difference,” he said. “Land will play a role — as all domains will in a joint manner.”

McConville emphasized that the U.S. is not at the point of placing “long-range precision fires” in partner nations in the Pacific.

“I think they are ‘open to the discussion’ is probably the way to put it,” he said. “They’re certainly open to us being there working with them, absolutely.”