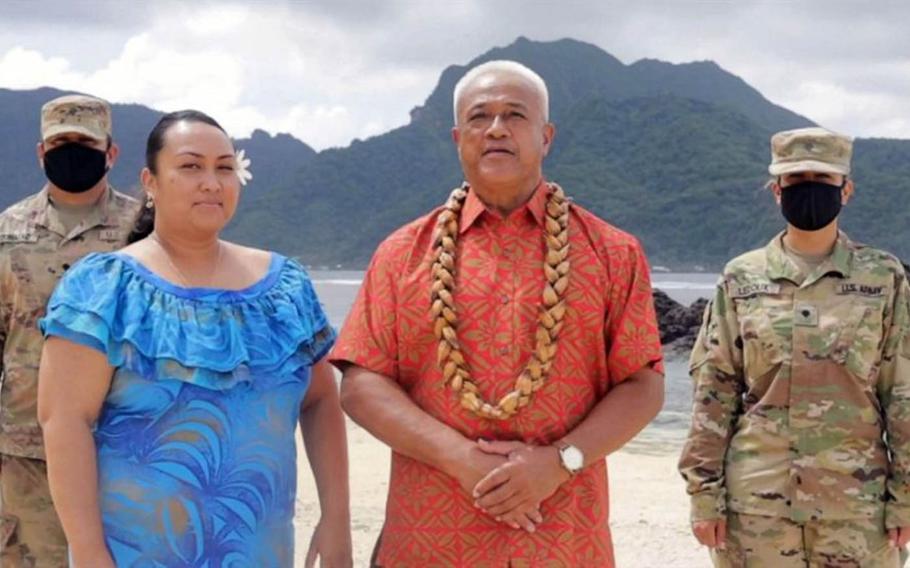 In this image from video, two soldiers stand at attention as Aliitama Sotoa, chairman of the American Samoa Democratic Party, in orange, casts the territory's 11 votes for Joe Biden in a brief segment of the Democratic National Convention on Aug. 8, 2020. (DNC)

Two Army Reserve soldiers who appeared in uniform in a broadcast segment of the Democratic National Convention in August will not be disciplined for the breach in rules, but their supervisor will be, according to a news report.

The soldiers, who have not been identified, are from the 9th Mission Support Command in Hawaii and appeared during a presentation by delegates from American Samoa during the convention’s roll call of states.

The uniformed soldiers, wearing black protective face masks, stood beside and slightly behind Matila and Sotoa.

While service members are allowed to participate in political activities, the Defense Department prohibits appearing in uniform at political events.

The Army began investigating the incident a day later, but the probe, completed Thursday, laid the blame for the incident on their boss, according to a report in Military Times.

“The supervisor at fault will receive the appropriate level of disciplinary action for violating the governing standards,” Flake said.

No details about the supervisor or the nature of the discipline were provided.