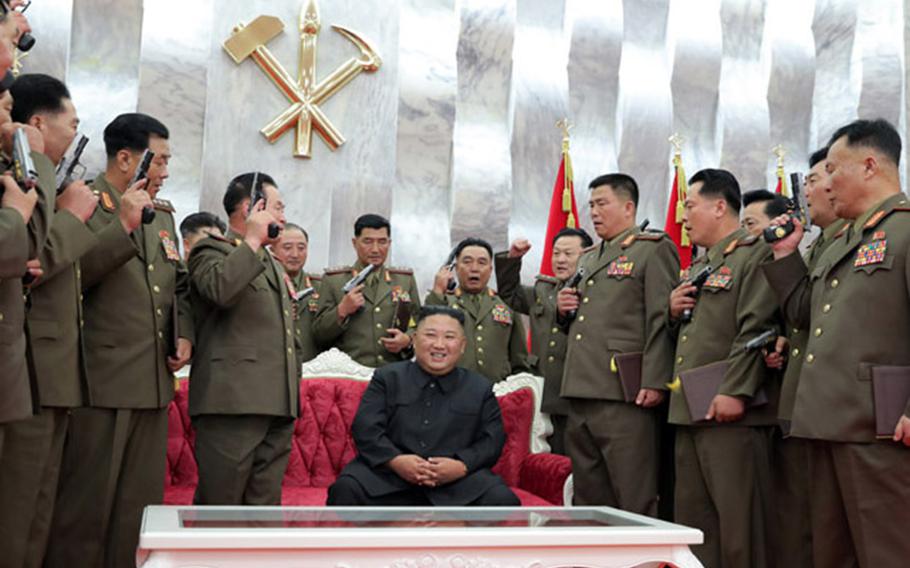 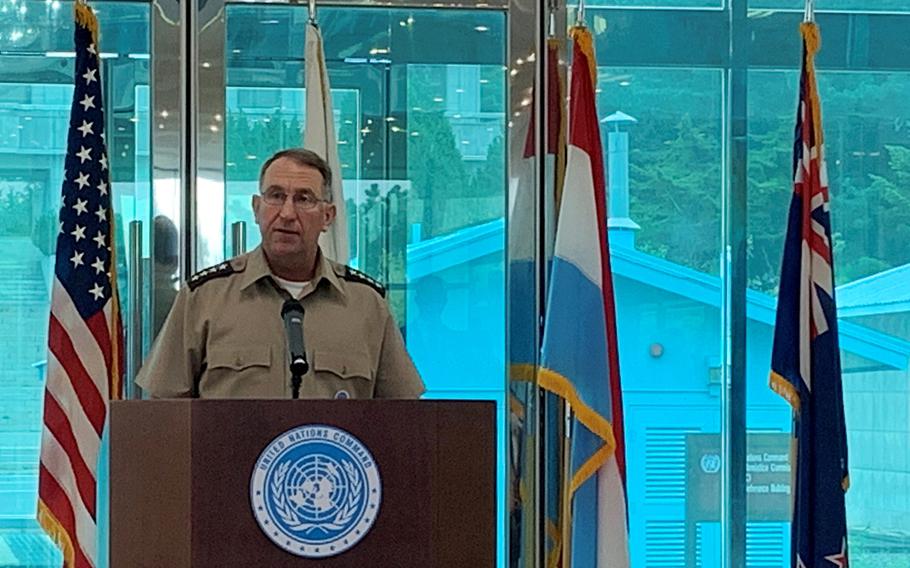 Buy Photo
Gen. Robert Abrams, commander of U.S. Forces Korea and United Nations Command, marks the 67th anniversary of the end of the Korean War during a speech on the South Korean side of the truce village of Panmunjom, Monday, July 27, 2020. (Kim Gamel/Stars and Stripes)

Read more stories from Stars and Stripes marking the 70th anniversary of the start of the Korean War.

PANMUNJOM, South Korea — North Korean leader Kim Jong Un handed out commemorative pistols, while the U.S.-led United Nations Command reaffirmed its commitment to seeking a “lasting peace” on the Korean Peninsula as the rival nations Monday marked the 67th anniversary of the end of the Korean War.

The 1950-53 war ended when the sides signed an armistice instead of a peace treaty, paving the way for decades of tensions that are rising again amid deadlocked diplomatic efforts aimed at improving relations and persuading the North to abandon its nuclear weapons.

“Last year on this day when I stood before you right here in the Freedom House, there was an air of cautious optimism as the world witnessed a significant and powerful reduction of tensions between North and South Korea,” said Gen. Robert Abrams, commander of the U.N. Command and U.S. Forces Korea. “Today this cautious optimism has shifted somewhat to an air of uncertainty.”

“A lasting peace remains our earnest goal,” Abrams added during his address Monday in the Freedom House on the South Korean side of the truce village of Panmunjom, with North Korea visible outside the windows behind him.

He also reaffirmed the U.N. Command’s “unwavering” commitment to enforcing the armistice until peace is achieved.

North Korea’s leader, meanwhile, gave his military commanders “commemorative pistols” on Sunday to celebrate the occasion of what state-run media called the “victory in the great Fatherland Liberation War,” reflecting the North’s official interpretation of how the war ended.

“He directly conferred on the leading officers the significant commemorative pistols bearing his august name in token of his trust,” the Korean Central News Agency reported Monday, publishing several photos of the event at the headquarters of the ruling Workers’ Party’s central committee in Pyongyang.

“The participants held high the pistols and made firm pledges to fight for Kim Jong Un at the cost of their lives,” KCNA added.

The two sides also displayed different approaches to the coronavirus.

Abrams spoke to an audience of South Korean foreign dignitaries who wore masks to protect against the spread of the virus and sat in seats spaced to a safe distance between guests. The North Koreans went mask-less and stood relatively close in the photos published by KCNA.

Abrams, who also spoke to veterans during a ceremony in Seoul earlier Monday, noted that negotiations took nearly 200 sessions lasting more than 400 hours and more than two years as fighting continued before the agreement was reached. It was meant to be temporary, but a peace agreement was never reached.

Then-South Korean President Syngman Rhee refused to sign the agreement because he didn’t want to admit giving up on unifying the peninsula by force, but Seoul has adhered to the deal in principle as a staunch U.S. ally.

Abrams also paid homage to the more than 7,500 American troops who remain missing from the war, most believed to have been killed on the North Korean side. Efforts to find more remains and bring them home have stalled along with the diplomacy.

“It’s our most sacred obligation to return every last soul to their families. The United Nations Command remains committed to this promise,” he said.