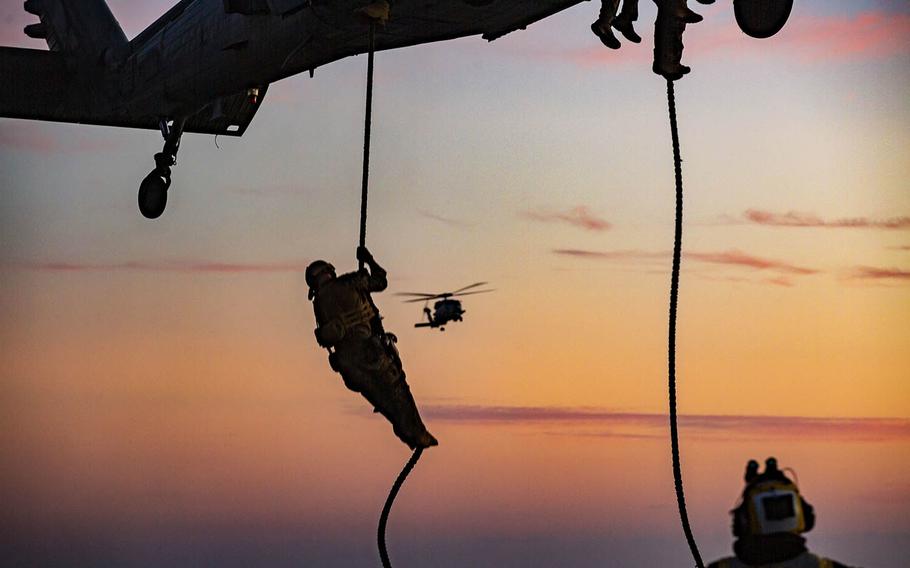 A member of the 15th Marine Expeditionary Unit fast-ropes from a Navy MH-60S Seahawk during training aboard the amphibious assault ship USS Makin Island in the Pacific Ocean, Oct. 29, 2020. (Mackenzie Binion/U.S. Marine Corps)

The amphibious ready group that suffered the loss of eight Marines and a sailor during training off the California coast in July and a coronavirus outbreak last month is now conducting regular operations in the Pacific, a Navy spokesman said Monday.

Citing operational security, Robertson declined to specify where the group — which includes the amphibious assault ship USS Makin Island and the amphibious transport docks USS San Diego and USS Somerset — was now operating or where it was headed.

Citing two unnamed defense officials, USNI News reported Monday that the ships had completed months of training with an exercise off Hawaii last week and were officially deployed as of Friday.

The amphibious assault vehicle, which weighed about 26 tons, quickly sank in waters hundreds of feet deep. Nine of those aboard lost their lives.

The deployment workup was also hampered by the pandemic.

Last month, personnel with the 15th MEU tested positive for the virus while deployed in the Northern Pacific, according to the Marine Corps Times. They were quarantined aboard ship until they could be transferred to shore.

The Navy did not say how many personnel tested positive but maintained the infections did not affect the unit’s ability to complete its mission.

The Japan-based America Amphibious Ready Group and 26th Marine Expeditionary Unit has patrolled throughout the Western Pacific this year.