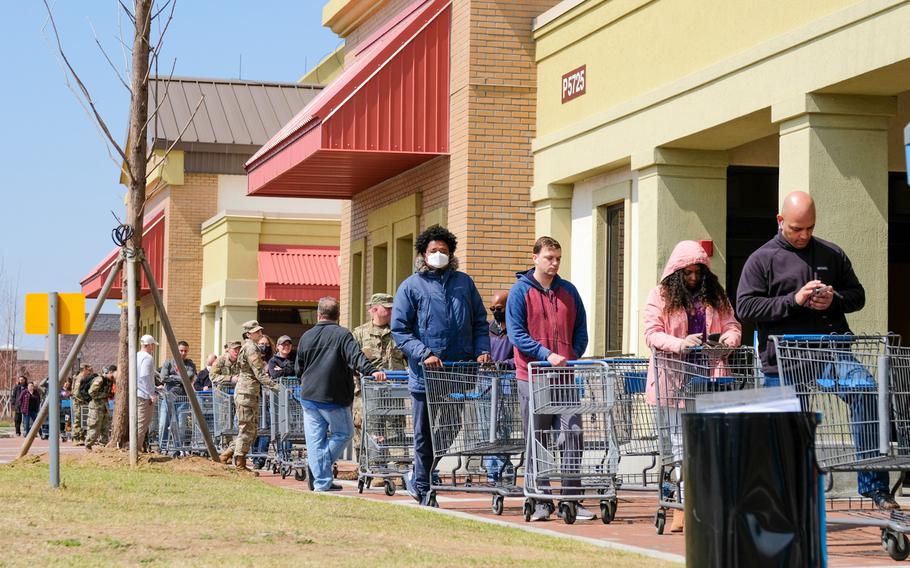 SEOUL, South Korea — Another American contractor tested positive for coronavirus on Wednesday as cases mounted on the main U.S. military base in South Korea but slowed nationwide.

The contractor was the fifth confirmed infection on Camp Humphreys in just over a week, and the 14th overall for U.S. Forces Korea, prompting the Army garrison to extend a partial lockdown for an indefinite period.

He was in isolation at his off-base residence as directed by military medical personnel, USFK said in a press release.

The latest case was announced as South Korea said it had confirmed 101 new infections on Tuesday as the daily count continued to hover under 150, down from a high of 909 on Feb. 29.

In all, 9,887 people have been infected nationwide since the virus first appeared in China late last year. South Korea had relatively few cases until an outbreak began in the southeastern city of Daegu in mid-February.

USFK infections also have been mainly on installations in Daegu and nearby areas, but Camp Humphreys is catching up. In addition to the five since March 24, a South Korean employee who works on the sprawling garrison tested positive on March 6.

The latest case last visited Camp Humphreys on Monday when he went to work, then drove to home, garrison commander Col. Michael Tremblay said in a Facebook live community update.

The contractor felt unwell Monday night so drove himself the next day to get tested for the virus. The results came back positive on Wednesday, Tremblay said.

Using closed-circuit TV footage and electronic records, the garrison has tracked his movements through the weekend, finding that he went to a shopette, the drive-thru at Popeyes and the post office.

Cleaning teams were scouring the affected areas, and some 50 people who were found to have been in close contact with him were undergoing screening, Tremblay said.

“We are getting very, very good at tracking people’s movements, knowing where they’re at at exact times and exact locations and exact purchase points,” he said, urging the community not to flood the public hotline. “Don’t call us, we’ll call you.”

USFK initially said the enhanced restrictions imposed Friday, including orders for most people to stay at home for all but bare necessities and ceasing on-post taxi and bus service, would last through Thursday.

Gyms also have been closed and large group physical training halted, raising concerns about readiness to fight as most soldiers are holed up in their barracks.

USFK said Wednesday that the so-called HPCON C+ status would remain in effect indefinitely as a precautionary measure as authorities continue contact tracing of the recent cases.

In all, two soldiers have been infected. The others were four military dependents, four American contractors and four South Korean employees.