‘America is back’: Indo-Pacific allies tweet their congratulations to Biden on inauguration 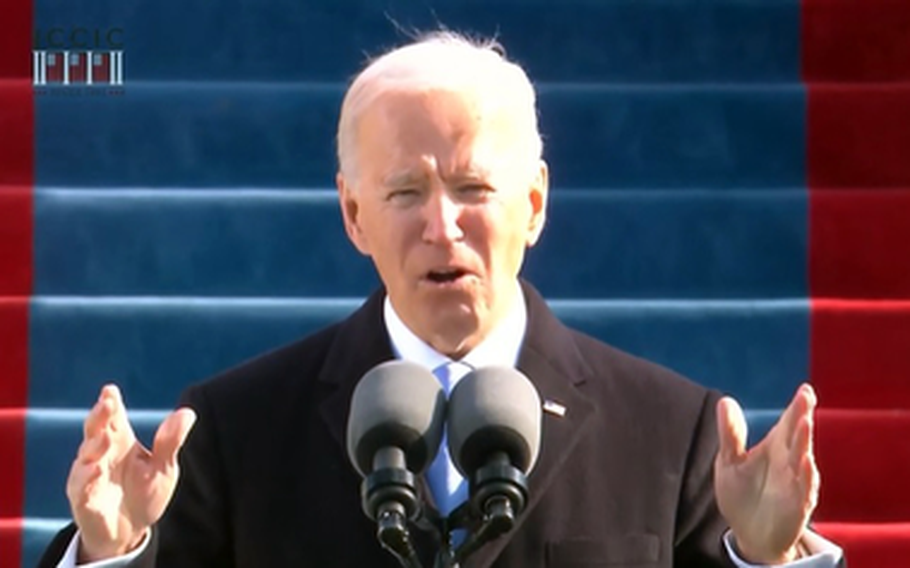 TOKYO – America’s most important allies and partners in the Indo-Pacific region, along with its greatest strategic rival, took to social media to congratulate President Joe Biden on his inauguration Wednesday.

Biden, 78, took the oath of office outside the U.S. Capitol at noon that day, taking over for a Trump administration that played hardball with Japan and South Korea in an effort to get them to pay more for their own defense; started a trade war with an increasingly aggressive China; and held summit meetings with North Korean leader Kim Jong Un in an unsuccessful attempt to denuclearize the Korean Peninsula.

“America is back,” South Korean President Moon Jae-in tweeted after Biden and Vice President Kamala Harris were sworn in. “America’s new beginning will make democracy even greater. Together with the Korean people, I stand by your journey toward ‘America United.’”

The alliance between the U.S. and South Korea will grow stronger by working together to address global issues such as public health, security, the economy and climate change, Moon said.

“The U.S. will surely succeed in building back better, and the world will be amazed,” he tweeted, using Biden’s campaign slogan. “[South Korea] will walk along with the new Biden administration from the start. We go together!”

A new U.S. administration will likely move quickly to resolve a dispute with South Korea over the cost of supporting 28,500 American troops on the divided peninsula, Michael O’Hanlon, a senior fellow at the Brookings Institution and Ralph Cossa, a former Air Force officer and president emeritus of the Pacific Forum think tank in Hawaii, told Stars and Stripes in November.

Seoul and Washington have been at odds over former President Donald Trump’s demand that South Korea substantially increase the amount it pays to host a U.S. military presence, a contract called the Special Measures Agreement. The previous agreement expired in December 2018.

In April, the U.S. government furloughed about 4,500 South Korean base employees, about half its local workforce, for nearly three months when the countries failed to agree on a plan.

Japanese Prime Minister Yoshihide Suga, in a tweet to Biden and Harris, described Japan and the U.S. as allies tied firmly by bonds and shared universal values.

“I look forward to working with you and your team to reinforce our alliance and to realize a Free and Open Indo-Pacific,” Suga wrote, using a U.S. catchphrase often said in relation to freedom-of-navigation exercises in the South and East China seas that irk Beijing.

In a call following his November election win, Biden told Suga the U.S. would defend the Senkaku Islands in the East China Sea, which are administered by Japan but claimed by China and Taiwan. Chinese vessels in 2020 made a record 333 trips to the area around the uninhabited islands, besting the previous year’s record of 282.

Security experts expect the new administration will drop hardball negotiating tactics used by the Trump administration over Japan’s contribution to the cost of basing approximately 54,000 U.S. troops in the country, but that Japan will likely pay more if asked.

The allies are negotiating ahead of the expiration of a five-year cost-sharing deal at the end of March. Trump had demanded Japan pay $8 billion a year, up from $2.5 billion, for hosting U.S. troops in the country, former national security adviser John Bolton wrote in his memoir, “The Room Where It Happened,” published in June.

“The Australia-US Alliance has never been more important. I wish you both every success for your time in office and look forward to working closely with your new administration,” he wrote.

The importance of the alliance was demonstrated last year with the rotation of 1,200 Marines to Australia’s Northern Territory. The contingent was half as large as planned but went ahead despite the coronavirus pandemic, which forced the cancellation of exercises with other countries in the region such as the Philippines.

“I look forward to working with him to strengthen India-US strategic partnership,” he wrote. “My best wishes for a successful term in leading USA as we stand united and resilient in addressing common challenges and advancing global peace and security.”

The India-US partnership is based on shared values, Modi said in another tweet.

“We have a substantial and multifaceted bilateral agenda, growing economic engagement and vibrant people to people linkages,” he wrote. “Committed to working with President @JoeBiden to take the India-US partnership to even greater heights.”

Shyam Tekwani, an India expert at the Asia-Pacific Center for Security Studies in Honolulu and Abhijit Singh, a senior fellow and security expert at the India-based think tank Observer Research Foundation, told Stars and Stripes in November that they expect defense ties between the U.S. and India to deepen due to mutual apprehension over China’s growing military might and its desire to dominate the region.

“It is a historic occasion,” Modi tweeted. “Looking forward to interacting with her to make India-USA relations more robust. The India-USA partnership is beneficial for our planet.”

Despite the well-wishes, there is bipartisan concern among U.S. lawmakers over China’s military build-up, threats to Taiwan, infiltration of U.S. institutions, theft of American intellectual property, illegal occupation of disputed South China Sea territory, suppression of democracy activists in Hong Kong and genocide of Uyghur Muslims and ethnic and religious minority groups who live in the northwestern region of Xinjiang.