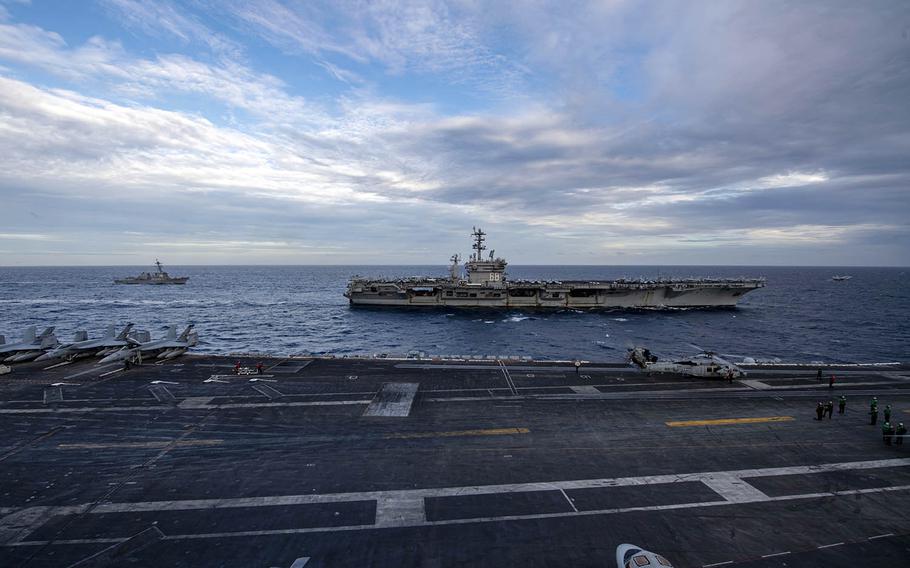 The aircraft carriers USS Nimitz and USS Theodore Roosevelt and their strike groups met in the contentious South China Sea for joint operations on Tuesday, according to a Navy statement.

“The ships and aircraft of the two strike groups coordinated operations in a highly trafficked area to demonstrate the U.S. Navy's ability to operate in challenging environments,” the statement said.

Two-carrier exercises are relatively rare, though they have seen a recent uptick in frequency. As of Tuesday, just nine have taken place in the Indo-Pacific region since 2001 — four since June.

The Navy last conducted dual carrier operations in the South China Sea in July, when the Nimitz and USS Ronald Reagan operated together twice.

China claims about 90% of the South China Sea as its territorial waters despite an international ruling in 2016 to the contrary. The U.S. in July formally rejected Beijing’s assertions in the region and regularly sends the Navy to challenge Chinese claims there.

The two-carrier exercise comes days after the Navy sent the USS John S. McCain on a back-to-back Taiwan Strait transit and freedom-of-navigation operation in the South China Sea on Thursday and Friday, respectively.

"Through operations like this, we ensure that we are tactically proficient to meet the challenge of maintaining peace and we are able to continue to show our partners and allies in the region that we are committed to promoting a free and open Indo-Pacific,” he said in the statement.

“We are committed to ensuring the lawful use of the sea that all nations enjoy under international law," he added.

The Nimitz was in the area Tuesday after leaving the Middle East last week. The ship is headed back to its Bremerton, Wash., homeport after nearly 250 days deployed.