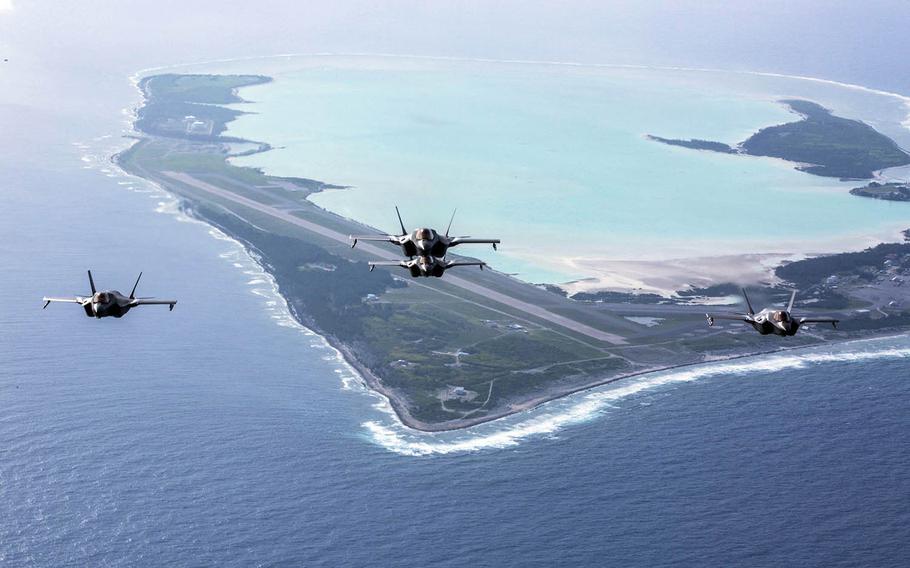 The Air Force is spending $1.75 million to gauge the effects of future sea-level rise at Wake Island Airfield, located on a remote Pacific atoll that is a key asset in America’s missile defense system.

“The purpose of contracting this study is to gather data and better prepare for future military construction projects,” the statement said.

Jupiter, a climate analytics firm based in San Mateo, Calif., has been subcontracted to conduct the comprehensive study that will “anticipate future sea-level rise and flooding” on the airfield in Micronesia, the company said in an announcement last week.

Wake Island is about 1,500 miles east of Guam and 2,300 miles west of the Hawaiian Islands.

The remote airfield “holds great significance to the Air Force because it serves as a trans-Pacific refueling depot for military missions in addition to being a military training and missile testing location,” the Air Force said in a news release in October.

The 9,800-foot runway – described in the news release as “the longest in the Pacific Islands” – has deteriorated after many years of use.

Roughly 500-600 aircraft use the airfield each year, the Air Force said.

“Having the data that this project will yield will enable the Air Force with strategic asset planning,” Jupiter said in its announcement. “With these data, the Air Force will be able to prepare for and mitigate anticipated consequences of severe weather events.”

Those steps could include “hardening” airfield facilities to withstand flooding or relocating them, Jupiter said.

The commencement of the sea-level study comes after the Air Force has already spent millions on upgrades on the airfield.

In the October news release, the Air Force said the airfield was undergoing $87 million worth of “critical airfield construction” that began in March 2020 and was expected to be completed by this spring.

The Defense Department has been aware for years that coral reef atolls in the Pacific are threatened by sea-level rise due to climate change.

A Pentagon-backed study by the U.S. Geological Survey completed in 2017 analyzed risks of rising sea level to the Marshall Islands, which are home to the Ronald Reagan Ballistic Missile Defense Test Site. The study concluded that in the near term, those islands would be dealing with larger waves that crash farther inland. In the longer term, some islands could be permanently inundated.

The study said that further analysis was needed on effects of rising sea level on Wake Island, which is roughly 600 miles north of the Marshall Islands, because it has a different coral reef ecosystem.

“The data and analyses from this effort would be crucial for future base and infrastructure planning, and also make it possible to better project how sea-level rise and climate change will impact smaller atoll systems, which characterize the majority of US and US-Affiliated atolls,” the 2017 study said.