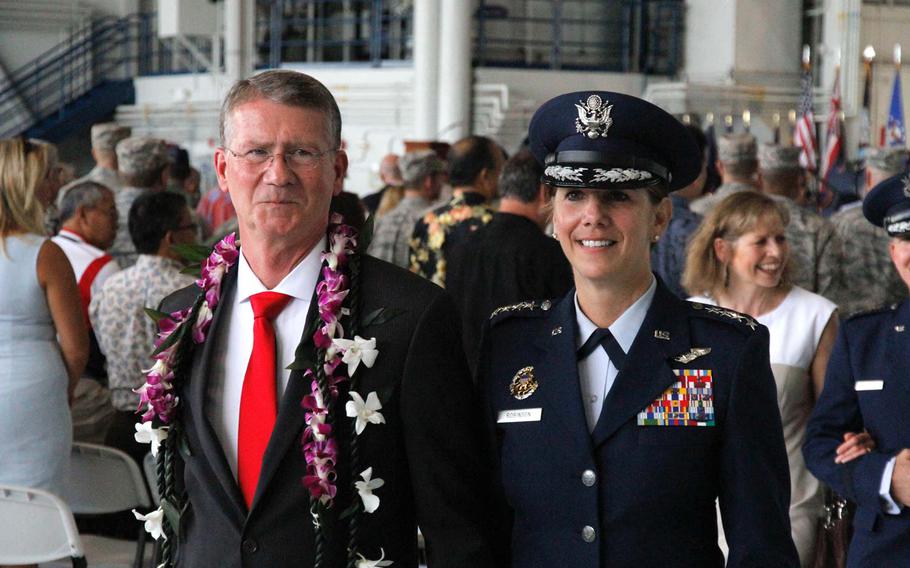 Air Force Gen. Lori Robinson departs the ceremony Thursday at which she became commander of U.S. Pacific Air Forces, marking the first time a woman has been appointed general of a joint forces air component command. To the left is her husband, David Robinson, a retired major general. (Wyatt Olson/Stars and Stipes)

Air Force Gen. Lori Robinson departs the ceremony Thursday at which she became commander of U.S. Pacific Air Forces, marking the first time a woman has been appointed general of a joint forces air component command. To the left is her husband, David Robinson, a retired major general. (Wyatt Olson/Stars and Stipes) 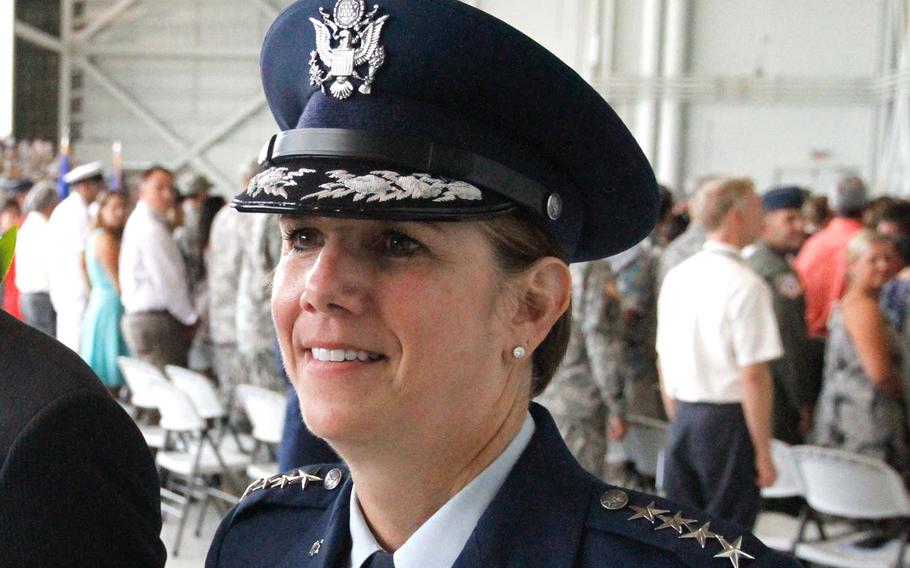 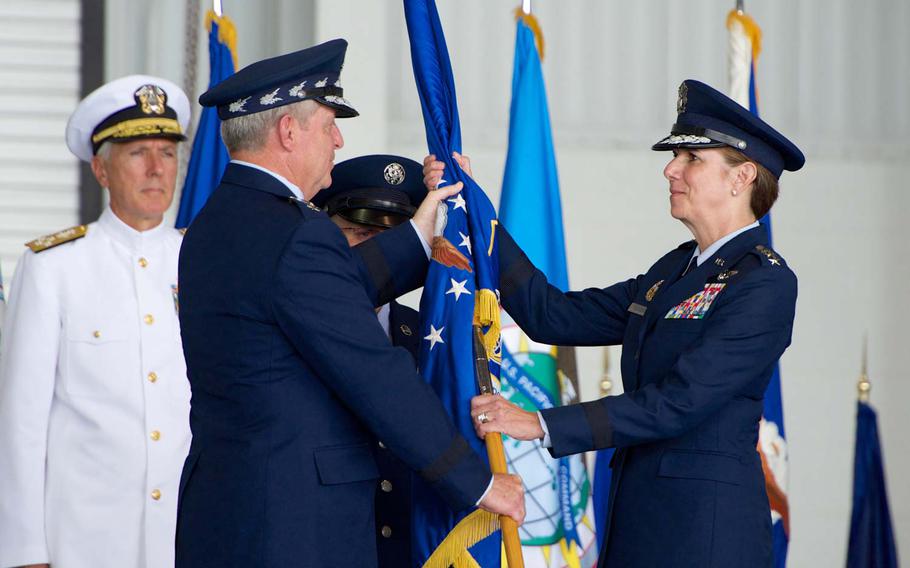 “Although some observers may be distracted today by the fact that she is first, the wisest will simply note that she just happens to be next,” Air Force chaplain Dondi Costin said during the ceremony’s opening invocation.

Newly promoted to a four-star, Robinson replaced Gen. Herbert “Hawk” Carlisle, who will head the Air Combat Command at Langley AFB — where Robinson just completed a stint as vice commander.

During the change-of-command ceremony held in Hangar 19 of the joint base, both Robinson and Carlisle joked about the frequent intersections of their careers.

“Lori, we go back 30 years, to 1984, and our paths have intersected ever since in what can only be described as fate,” Carlisle said.

He recalled being a fighter pilot in that era and had come up with a “brilliant maneuver” for shooting down a drone with a missile during a weapons instructor course. The move turned out to be less than brilliant, he said, and he lost view of the target.

Robinson, then a weapons controller, radioed him “in a calm voice and told me exactly where it was,” he said.

She remembered him as the antithesis of Top Gun-era cockiness when, to the stunned amazement of her squadron, Carlisle returned a piece of equipment to her personally.

This was back “when fighter pilots didn’t talk to weapons controllers — they merely yelled at them, and it was always our fault,” Robinson joked.

Robinson will command about 46,000 airmen in Japan, South Korea, Hawaii, Alaska and Guam.

She takes the helm amid President Barack Obama’s rebalance to the Pacific, which is intended to reinvigorate America’s economic, diplomatic and military engagement in the Indo-Asia region. The Air Force’s role in the rebalance is now being tested by America’s airstrike campaign against Islamic State militants in Iraq.

The rebalance was clearly on the minds of two speakers taking the podium at the ceremony, Adm. Samuel J. Locklear III, commander of U.S. Pacific Command, and Gen. Mark A. Welsh III, Air Force Chief of Staff.

Noting the challenge of maintaining an air presence in a theater of 13 time zones and 100 million square miles of air space, Welsh told the airmen, “While others talk about the merit and challenges of a rebalance to the Pacific, you worked to make it a reality.”

Locklear praised Carlisle as “one of my go-to leaders when it comes to articulating what the rebalance means to America and what it means to the region.”

Locklear also commended him for managing readiness during the budget cutbacks caused by sequestration, which he described as “the most difficult time, I think, in the history of our military, at least as far as I can tell.”

“Together they are a force of nature,” Welsh said.

“Air power brings a unique, asymmetric advantage with speed, range and flexibility to this immense area of responsibility,” Robinson said to Locklear at the closing of the ceremony.

“I pledge to be a full-up partner and component commander providing my best military advice on how airpower and other PACAF capabilities can best serve your priorities.”

To Welsh she acknowledged that these are “fiscally restrained times” and that PACAF “would make the best use of every dollar that’s spent to organize, train and equip our airmen so that they can meet any mission asked of them. And when we can’t do everything that’s asked, I will let you and the secretary know what the risk is.”