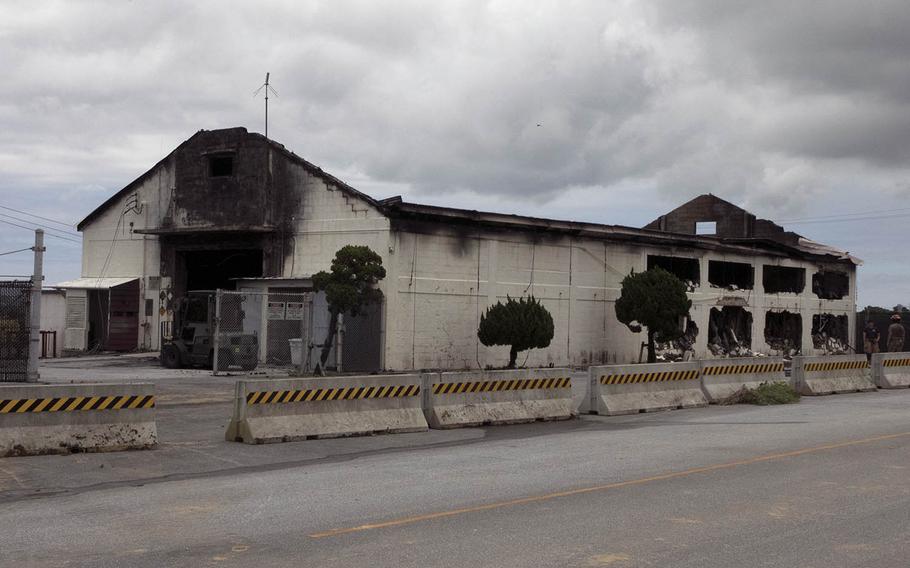 Buy Photo
An Air Force Ground Accident Investigation Board report blamed improperly stored chemicals for a fire that destroyed a warehouse at Kadena Air Base, Okinawa, on June 22, 2020. (Matthew M. Burke/Stars and Stripes)

Buy Photo
An Air Force Ground Accident Investigation Board report blamed improperly stored chemicals for a fire that destroyed a warehouse at Kadena Air Base, Okinawa, on June 22, 2020. (Matthew M. Burke/Stars and Stripes) 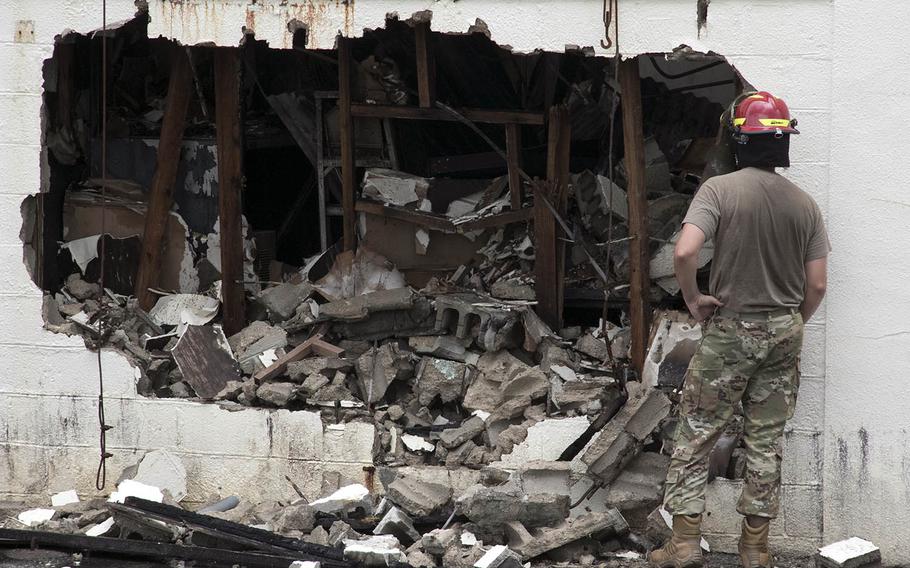 Buy Photo
An airman stands outside a fire-gutted warehouse at Kadena Air Base, Okinawa, June 23, 2020. (Matthew M. Burke/Stars and Stripes)

CAMP FOSTER, Okinawa – The 18th Wing was warned of the fire risk in a warehouse on Kadena Air Base two weeks before a blaze gutted the structure on June 22, according to an Air Force investigation.

The fire occurred as a result of improperly stored chemicals, according to the report released last week by the Air Force Ground Investigation Board.

Investigators traced the fire’s origin to the southeast corner of building 3150, a hazardous materials warehouse of the 18th Logistics Readiness Squadron, according to the report. The report states that calcium hypochlorite improperly stored there at least 20 months caused the fire.

The 18th Wing was forewarned of the hazard when the base fire department responded to the warehouse two weeks before the fire to extinguish two smoking trash bags containing improperly stored calcium hypochlorite, according to the report, which was posted online on the Air Force Judge Advocate General’s Corps website.

“Leadership will use the results to make necessary decisions if any disciplinary actions or procedural changes are required,” the wing wrote Friday in an email to Stars and Stripes. “The commanders received a copy of the report for their review and determination on appropriate individual accountability.”

Calcium hypochlorite, used to treat water or as a bleaching powder, has strong oxidizing potential and can become unstable in high heat and humidity. While the chemical is not combustible, the heat it produces can ignite other materials and intensify a resulting fire, the board report said.

The high heat and humidity in the warehouse “did not meet the recommended guidance for safely storing” calcium hypochlorite, the report said.

“Over several months, the boxes and plastic packaging deteriorated to the point where boxes on the pallets toppled over, packages ruptured, and loose [calcium hypochlorite] granules accumulated on the [warehouse] floor,” the report said.

The fire caused $2.6 million in damage and sent 115 U.S. military and civilian personnel to the hospital for smoke related injuries, according to the report. Five Japanese base workers also submitted injury reports to the Okinawa Defense Bureau, which represents Japan’s Defense Ministry on the island.

The wing, in its statement Friday, said the board report was not meant to determine a cause of the accident but to gather and preserve facts surrounding it for “litigation, claims, disciplinary actions, administrative proceedings and for other purposes.”

The fire began at 8:52 a.m. as five airmen from the 18th Civil Engineer Squadron Readiness and Emergency Management Flight repackaged calcium hypochlorite into plastic and metal barrels, the report said.

The materials were slated for disposal at a hazardous waste disposal facility.

One of the airmen felt heat radiating from a pallet of calcium hypochlorite about 90 minutes into their work, the report said. Within minutes, they saw smoke and flames and evacuated the building.

Fire crews arrived within two minutes and applied water to the fire, according to the report. A large plume of smoke led to evacuations of buildings covering nearly two square miles on base for about four hours. An airfield was also temporarily shut down for just under two hours, and three aircraft were diverted.

One airman was hospitalized overnight but was released the next day with no lasting injury, the report said.

Calcium hypochlorite can release toxic chlorine gases when heated but did not in traceable amounts in this case, the report said, citing test kit sampling by base bioenvironmental teams.

The fire burned for about 4 ½ hours, destroying the warehouse and much of its contents, which included 785 boxes, or 33,859 pounds, of calcium hypochlorite, the report states.

No personnel or property outside of Kadena Air Base suffered damage, according to the wing.

“Collectively, these efforts have postured the 18th Wing to drastically reduce the potential for another hazardous material-related fire at Kadena Air Base and to be better prepared and equipped to manage such an incident if it were to occur again,” the statement said.

The Air Force by Nov. 1 removed and disposed of all remaining bulk calcium hypochlorite in Japan in accordance with governing standards, the wing said.

The investigation did not probe potential long-term health issues for anyone exposed during the fire, according to a Pacific Air Forces statement Jan. 25.

“Anyone who feels ill effects is encouraged to contact their supervisor or healthcare provider for appropriate care,” the statement said.