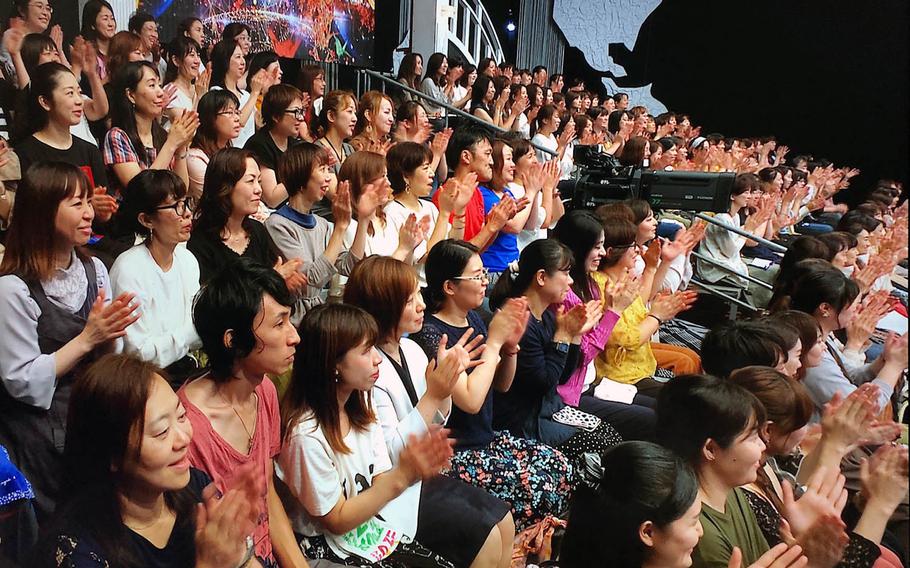 A studio audience listens to a group from the U.S. Air Force Band of the Pacific during a live broadcast of the Japanese TV show, "Nodojiman The World!" in Tokyo on Wednesday, Sept. 11, 2019. (Michael D. Hoerber/U.S. Air Force)

A studio audience listens to a group from the U.S. Air Force Band of the Pacific during a live broadcast of the Japanese TV show, "Nodojiman The World!" in Tokyo on Wednesday, Sept. 11, 2019. (Michael D. Hoerber/U.S. Air Force) 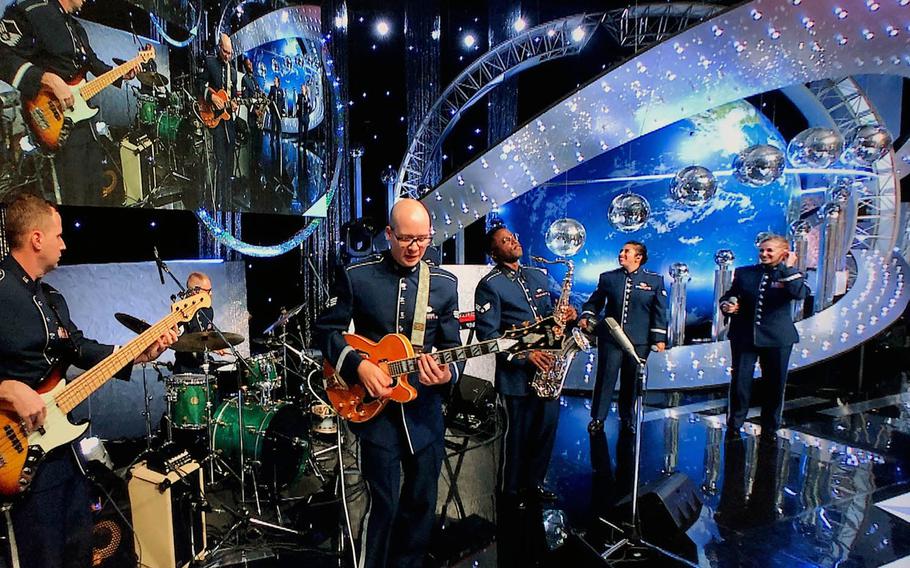 YOKOTA AIR BASE, Japan — Members of the Air Force’s Band of the Pacific-Asia got some major television exposure in Japan this week by performing on a live show that features foreigners singing Japanese songs.

Final Approach — a nine-member subgroup of the Yokota-based band that includes three vocalists, guitar, drums, bass, piano, saxophone and a sound engineer — played and sang in Japanese on Nippon Television’s “Nodojiman The World!” The title roughly translates to “Singing Contest of the World.”

The Air Force group didn’t compete during the show but was invited to play the opening song.

“I believe this is the first time we’ve been on Japanese television,” he said about their performance of “Sekai ni Hitotsu Dake no Hana” or “The One and Only Flower in the World” — about people’s uniqueness.

The song was at hit for Japanese boy band SMAP in 2003 and has sold more than 3 million copies. A member of SMAP was one of the hosts on Wednesday’s show.

The program’s producers reached out after seeing a Final Approach video on YouTube, Maj. Michael Hoerber, the Air Force band’s commander, told Stars and Stripes in an email. That video included footage of the Thunderbirds air demonstration team.

“We are representing the Air Force, but we are also using music as a language to connect with Japanese people,” Holdrige said.

Members of Holdridge’s family, including his Japanese wife, Miho, along with friends from the Japan Air Self-Defense Force’s band, tuned in, he added.

This week’s performance may have been Final Approach’s first on Japanese TV, but the group is no stranger to Japanese audiences. It plays throughout the year at festival and other events, with a setlist of popular music that includes Top 40, pop, rock and country hits.

Headquartered at Yokota in western Tokyo, Band of the Pacific-Asia’s mission and vision includes building “cross-cultural trust” and “strengthening and sustaining vital alliances and partnerships” across the region, according to its official website. A sister unit is based at Joint Base Pearl Harbor-Hickam, Hawaii.