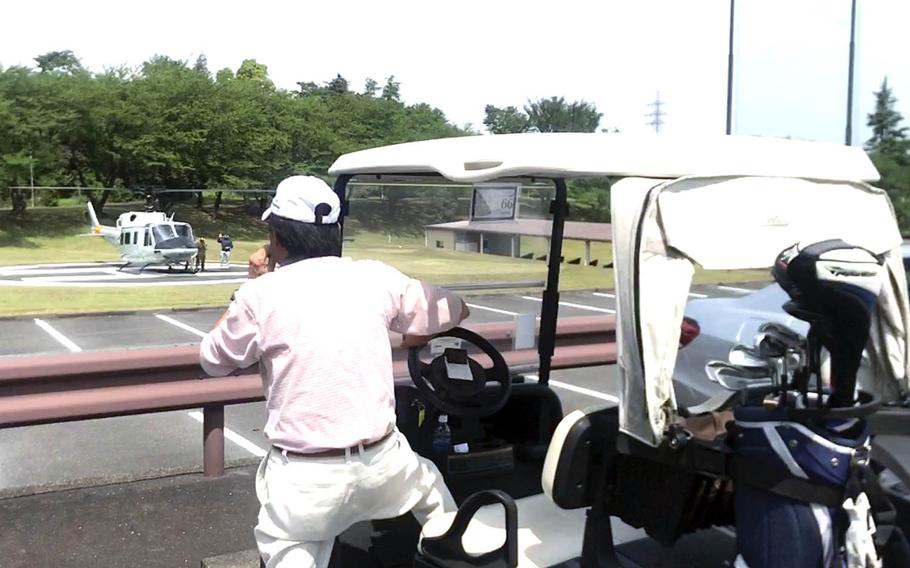 A golfer watches a UH-1N Iroquois helicopter land near the golf course at Tama Hills Recreation Area in western Tokyo, Saturday, May 1, 2021. (Seth Robson/Stars and Stripes)

A golfer watches a UH-1N Iroquois helicopter land near the golf course at Tama Hills Recreation Area in western Tokyo, Saturday, May 1, 2021. (Seth Robson/Stars and Stripes) 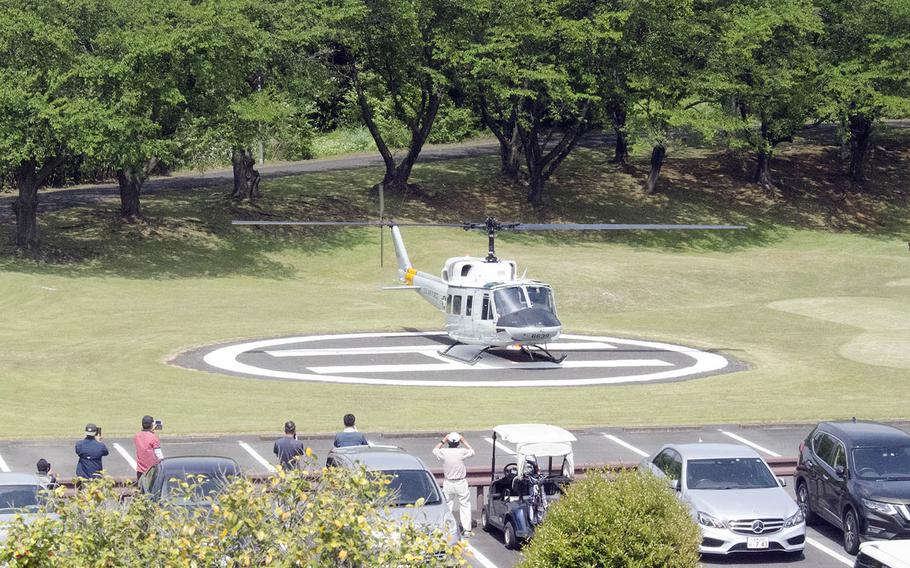 A UH-1N Iroquois helicopter from Yokota Air Base, Japan, tests an emergency landing zone at nearby Tama Hills Recreation Area, Saturday, May 1, 2021. (Seth Robson/Stars and Stripes)

TAMA HILLS RECREATION AREA, Japan — Golf balls whizzed harmlessly below a UH-1N Iroquois on Saturday as the helicopter circled over a golf course used by the U.S. military in western Tokyo.

The Huey, from the 459th Airlift Squadron out of nearby Yokota Air Base, touched down on a giant white “H” beside a driving range. The emergency landing zone test marked the first time an aircraft had landed there in four decades, according to the Air Force.

A crowd of curious golfers watched from a parking lot and then posed for photographs as the aircraft idled on the pad.

“The reason we came down here was to showcase the landing zone here at Tama Hills,” Tech. Sgt. Alexandra Vidato, a flight engineer, said after exiting the Huey. “We would use it for any sort of emergency for Yokota or the local community.”

The Air Force dubbed the golf course landing “Operation Tamadachi” — a play on Operation Tomodachi, the humanitarian response involving 24,000 U.S. troops to the earthquake and tsunami that struck northeast Japan on March 11, 2011.

The Tama Hills landing zone, about 18 miles west of Tokyo’s Shinjuku ward, hasn’t been used in about 40 years, Vidato said.

The Tama helipad is close to a residential neighborhood next to the golf course.

A passenger on the helicopter, Tama’s head golf professional, Patrick Bowman, had a bird’s eye view of the course on his way to work.

“We don’t expect this to be an everyday thing,” he said after clambering out of the Huey.

Tama Hills is revitalizing its infrastructure, which included repainting the helipad, Bowman said.

During the flight, he could see golf balls flying through the air below, he said.

“It felt like being a hawk … a Tama Hawk,” he said, referring to a youth golf team that he captains.