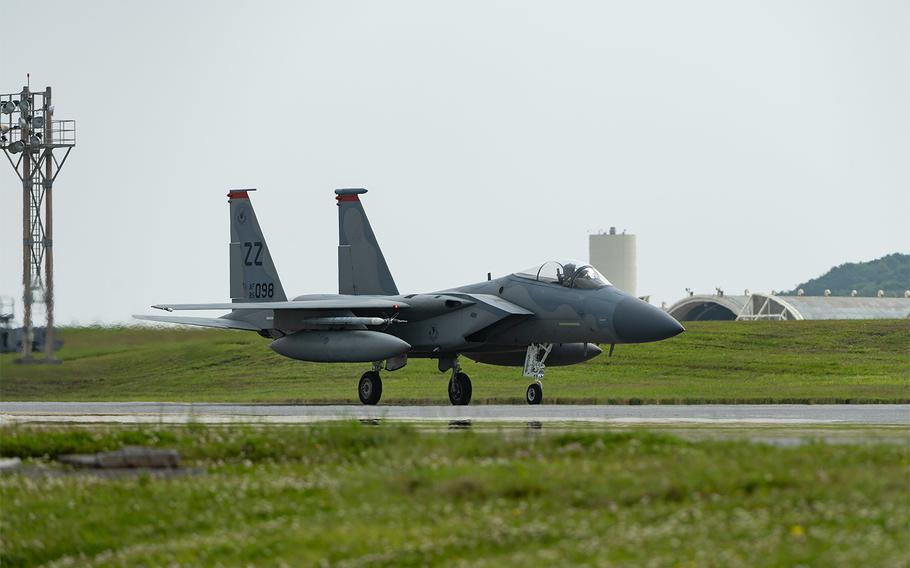 A 7-inch, 8-pound part called an “eagle claw” fell from the aircraft at approximately 10:30 a.m., a spokesman from the Okinawa Defense Bureau told Stars and Stripes by phone Wednesday. The defense bureau represents Japan’s Defense Ministry on the island.

It is unknown where the part fell from the aircraft, but the F-15 had flown along Okinawa’s main thoroughfare, Route 58, and then over the ocean about 60 miles east-southeast from Kadena Air Base, the spokesman said.

“We were told there was no damage or injuries related to the falling part,” the defense bureau spokesman said. “We are currently asking Kadena what this part does and where it belongs in the jet.”

The 18th Wing did not immediately answer questions from Stars and Stripes about the incident.

Bureau officials have also requested more precise details on the aircraft’s flight path and point of origin, the spokesman said.

“With everything going on with coronavirus, we just want them to not cause any more trouble at this moment,” a prefectural spokesman told Stars and Stripes on Wednesday.

The official said prefectural authorities were still gathering information about the incident.

“Once we receive enough information, and if necessary, we will lodge a protest with Kadena Air Base over this incident,” he said.

Several incidents in recent years of falling parts from U.S. aircraft on or around Japan’s southern island prefecture have drawn condemnation from local residents.

On Aug. 27, 2019, a Marine Corps CH-53E Super Stallion helicopter lost a cabin window over open water off the Okinawa coast, U.S. military officials reported at the time. No injuries or property damage were reported.

In December 2017, a 3-foot-by-3-foot window fell from a Super Stallion from Marine Corps Air Station Futenma and landed on an elementary school sports field near the base fence line. More than 50 schoolchildren were playing nearby at the time.