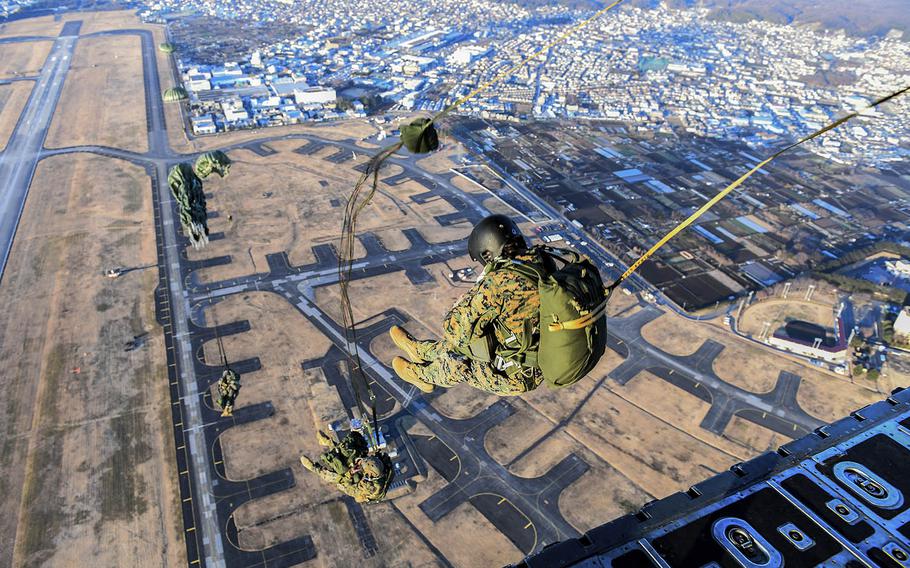 Part of a parachute that broke away Tuesday, April 10, 2018, over Yokota Air Base, Japan, was found on the grounds of a Japanese school near the installation. (Allen Onstott/Stars and Stripes;)

YOKOTA AIR BASE, Japan — The Air Force planned to resume jump training over western Tokyo on Thursday after an incident this week in which part of a parachute drifted onto a Japanese school.

During a jump over Yokota on Tuesday, a jumper’s reserve parachute deployed and part that is designed to break away was blown by wind onto a tennis court at the junior high school in nearby Hamura City.

In response, the 374th Airlift Wing suspended parachute training and sent an officer to the school to apologize, said wing spokeswoman Kaori Matsukasa.

The Air Force is not identifying the unit or service branch of the parachutists involved in the incident.

Hamura City officials plan to discuss their response with neighboring cities and the Tokyo Metropolitan Government. The officials sent a protest letter to U.S. Forces Japan and the Japanese government stating, “one wrong move could have affected lives,” according to the Tokyo Shimbun newspaper.

Col. Mark Mullarkey, the officer in charge of training at the 374th, visited the school and Hamura City Hall Wednesday and apologized, the newspaper reported.

“While we are grateful that no one was injured and no property damage occurred, we regret that this incident caused concerns in the Hamura community,” the wing said in a statement.

An investigation determined that aircrew and the parachutist followed all established protocols and safety procedures, the statement said.

“The parachutist was forced to cut away the main chute when both the main and reserve parachutes deployed after exiting the aircraft,” the statement said. This was done to keep the chutes from tangling.

“The procedure worked as designed and the parachutist landed safely on Yokota Air Base without any injuries,” the statement said.

All of the parachutes used in the training were inspected after the incident, the statement added.