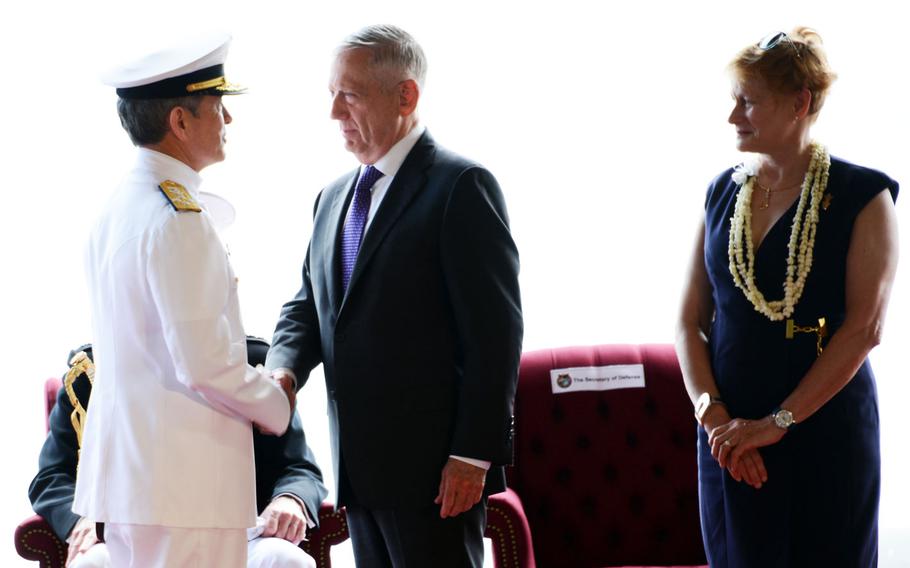 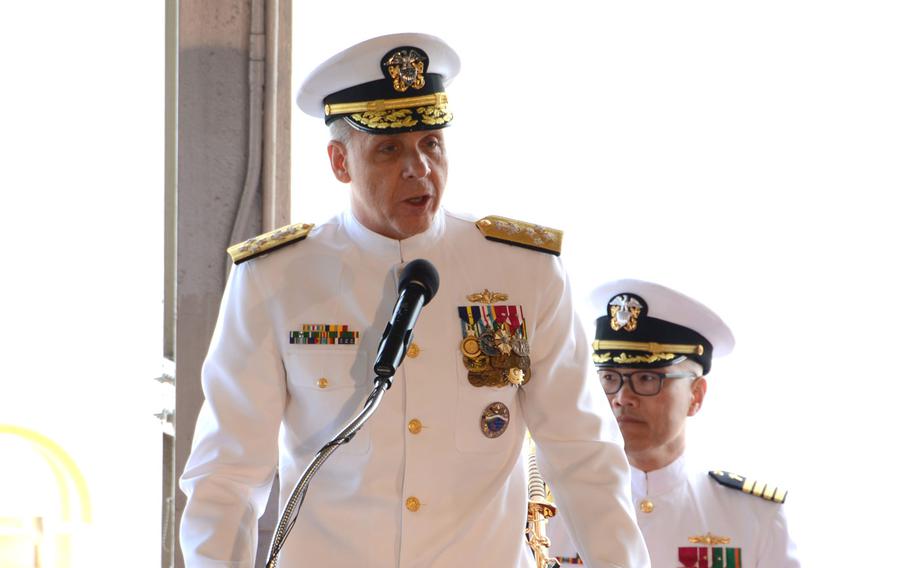 Adm. Philip S. Davidson became the 25th commander of U.S. Pacific Command during a ceremony at Joint Base Pearl Harbor-Hickam, Hawaii, May 30, 2018. The combatant command has been renamed Indo-Pacific Command. (Wyatt Olson/Stars and Stripes) 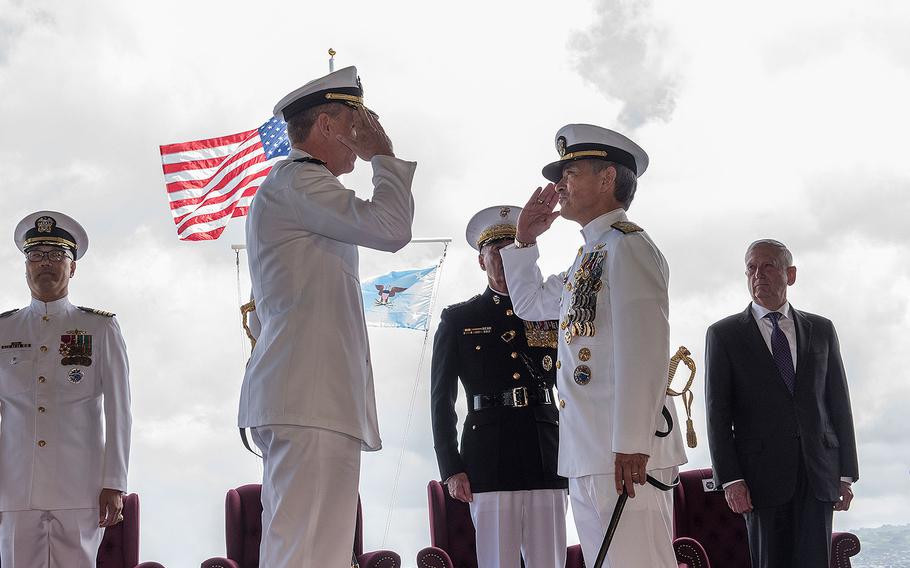 JOINT BASE PEARL HARBOR-HICKAM, Hawaii — Since taking charge of U.S. Pacific Command in 2015, Adm. Harry Harris has given “277 speeches, large and small — or one speech every four days,” the four-star said Wednesday during a change-of-command ceremony here.

And just as he did during his first speech as PACOM commander “three years and three days” earlier, Harris hammered on the region’s four greatest challenges: North Korea, China, jihadist extremism and a revanchist Russia.

“I’ve reiterated these things over and over again, and I see no reason to change today, on what will be my last speech in uniform,” said the retiring Harris, who has been nominated to become ambassador to South Korea.

Davidson was not the only thing new for the Pacific combatant command; it has been renamed U.S. Indo-Pacific Command, or INDOPACOM, reflecting the rising strategic importance of the Indian Ocean, India and Sri Lanka.

Harris has been a vocal critic of China’s militarization of disputed areas of the South China Sea, where the nation has built artificial islands and erected on them runways, hangars and other facilities useful only for military purposes.

“We should cooperate with Beijing where we can but stand ready to confront them when we must,” Harris said.

Last week the Pentagon announced that China had been “disinvited” to attend this summer’s Rim of the Pacific exercise in Hawaii, where it sent ships and personnel to the drills in 2014 and 2016.

Vietnam, one of nations disputing China’s claim over areas of the South China Sea, will participate in RIMPAC this year for the first time ever. Sri Lanka will also be a first-timer.

At the end of a 40-year Navy career, Harris had garnered the titles of Gray Owl and Old Goat, the former for being the longest-serving active duty naval flight officer, the latter for being the oldest Naval Academy graduate still on active duty.

Richard said Harris’ Navy career was characterized by “adaptability and innovation in out-thinking any adversary and working his way through the most challenging situation.”

The son of a Navy chief petty officer who survived the sinking of the USS Lexington during World War II, Harris was virtually “predestined” to end up in the Navy, Richardson said.

Harris racked up 4,000 flying hours on the P-3 Orion surveillance plane, with 400 hours of combat time, he said. Harris pioneered the use of the maritime P-3 for surveillance overland.

“He’s a warrior-diplomat if there ever was one,” Richardson said.

“Here at Pacific Command he’s traveled the equivalent of 37 trips around the globe — 76 total days in the air to build and strengthen, expand and deepen, our relationships with our key allies and partners in this fundamentally important part of the world,” he said.

Secretary of Defense Jim Mattis described the command as “our primary combatant command, standing watch and intimately engaged with over half of the Earth’s surface.”

Mattis was in Hawaii while on his way to the annual Shangri-La Dialogue in Singapore. He touted the updated U.S. National Defense Strategy released in January as a roadmap for the American military that takes a “clear-eyed look at the world as it is, not how we would wish it to be.”

Without naming China, Mattis criticized that nation’s increasing use of economic leverage and naval might to dominate the region’s nations, particularly through its One Belt One Road initiative to fund and build infrastructure.

America’s vision for the future of the Pacific region “is shared by most nations in the region, where every state’s sovereignty is respected, no matter the size,” Mattis said. “It’s a region open to investment and free, fair and reciprocal trade not bound by any nation’s predatory economics or threat of coercion — for the Indo-Pacific has many belts and many roads.”

Harris called Davidson “a battle-tested leader” with experience and expertise from around the world.