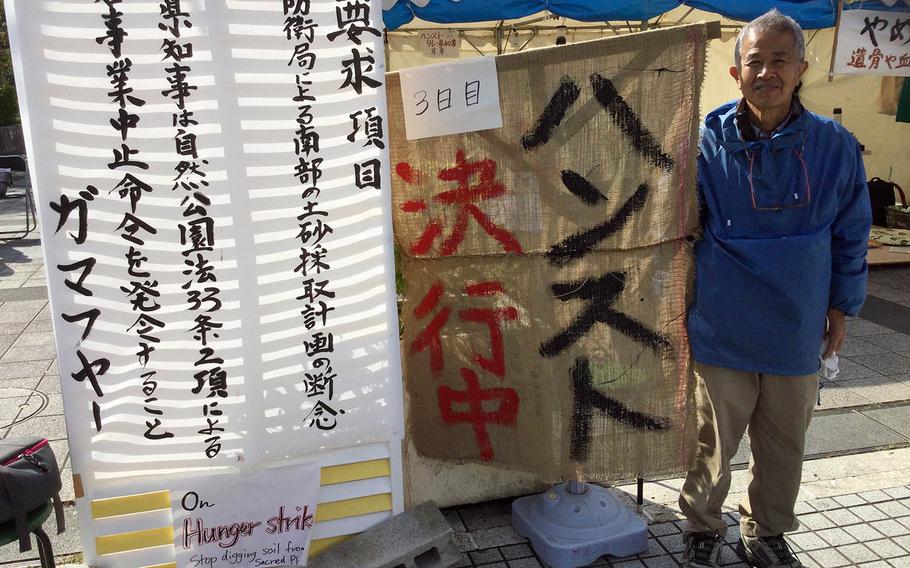 Buy Photo
Landfill work continues at Camp Schwab, Okinawa, in December 2018, for a runway that will one day allow for the relocation of air operations from Marine Corps Air Station Futenma. (Carlos Vazquez/Stars and Stripes)

CAMP FOSTER, Okinawa — A prominent Japanese activist is staging a sit-in and hunger strike this week to try and prevent World War II remains from becoming landfill at a U.S. military base construction site.

Takamatsu Gushiken, 67, founder of the Okinawa-based nonprofit Gamafuya, which is dedicated to recovering the remains of Okinawa’s Japanese and American war dead, began protesting March 1 in front of the Okinawa prefectural office in Naha city, he told Stars and Stripes by phone Wednesday. He planned to strike until Saturday.

One of Japan’s leading voices on the disposition of World War II remains, Gushiken has been working to excavate and repatriate casualties from the Battle of Okinawa for nearly 30 years and has made more than 300 recoveries, including at least four Americans, who have been identified and returned to their families.

Gushiken is urging the Japanese government to abandon plans to procure fill for a new runway at the U.S. Marine base Camp Schwab from the southern portion of the island, which saw some of the war’s heaviest fighting and where thousands remain unaccounted for today.

That runway is expected to eventually replace the one at Marine Corps Air Station Futenma.

Gushiken is urging prefectural officials to deny permits for the proposed excavations. The Japanese government chose seven sites to procure the fill, and two — Itoman and Yaese — are in southern Okinawa.

“If soil from those areas is used, remains are going to be mixed in,” Gushiken said Wednesday. “Remains of American service members, who died during the war, could also be in that soil.”

With Gamafuya’s protest, he said, “we are urging the national government to give up the plan to collect soil from southern part of the Okinawa main island.”

The 82-day Battle of Okinawa claimed 12,520 American service members, 110,000 Japanese troops and 140,000 Okinawan civilians. As of March 2019, 185,269 sets of remains have been recovered, according to the Information Center for Recovery of the War Dead in Okinawa.

Tokyo was forced to seek new permits in April after finding that the seabed in Oura Bay where the runway is being built must be fortified before construction can be completed, the Asahi newspaper reported Wednesday. The reclamation plan calls for 1.1 billion cubic feet of soil, 70% of which would be procured locally.

Gushiken believes that once a single company is allowed to dig in southern Okinawa, others will follow.

Japan’s Defense Minister Nobuo Kishi declined to comment when asked about Gushiken’s protest during a Tuesday news conference, but said he understands there are differing viewpoints on where the soil should be taken.

“Nothing has been decided on where to get soil after the change [of the construction plan] is approved,” Kishi said, according to a transcript posted on the defense ministry website. He said the quarry companies in southern Okinawa conduct visual checks for remains before digging.

“Even if soil were to be collected from mines in the southern part of the main island of Okinawa, we will make sure to include how remains should be handled in the contract and require quarry operators to take appropriate measures based on the current structure on recovering the remains by affiliated agencies and efforts by quarry operators,” Kishi said.

Small bones would likely also be missed through a visual check, Gushiken said Wednesday. Many bones have disintegrated since the war and have literally become the soil of the southern part of the island, he said.