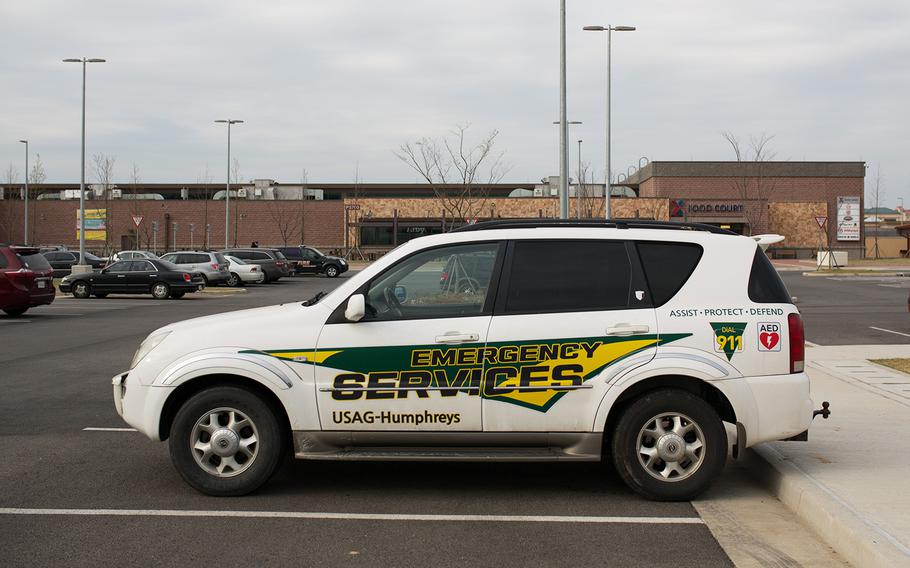 Buy Photo
An Emergency Services Vehicle sits outside the Post Exchange at Camp Humphreys, South Korea, after the "all clear" was given during a potential active shooter event, Friday, April 13, 2018. (Marcus Fichtl/Stars and Stripes)

CAMP HUMPHREYS, South Korea — A report of an active shooter at Camp Humphreys, a major U.S. base in South Korea, was a false alarm, a spokesman said.

The alarm was sounded Friday near the Post Exchange, prompting authorities to evacuate the facility and lock down access gates at the base in Pyeongtaek, about 40 miles south of Seoul.

But investigators determined it was a false alarm. "It’s all-clear,” garrison spokesman Bob McElroy told Stars and Stripes. He said an alarm had been triggered indicating there was an active shooter in the PX so the manager contacted the military police. “They cleared the facility and they went in and determined there was nothing to it and it was a false alarm,” he said. The alarm occurred as a high school soccer game was underway, prompting players and spectators to rush into a nearby gym. The game resumed after the all-clear was issued, according to a Stars and Stripes reporter on the scene. Humphreys has undergone a massive expansion as part of a long-delayed plan to relocate the bulk of U.S. forces south of Seoul. Its population has doubled to about 26,000 in recent years.