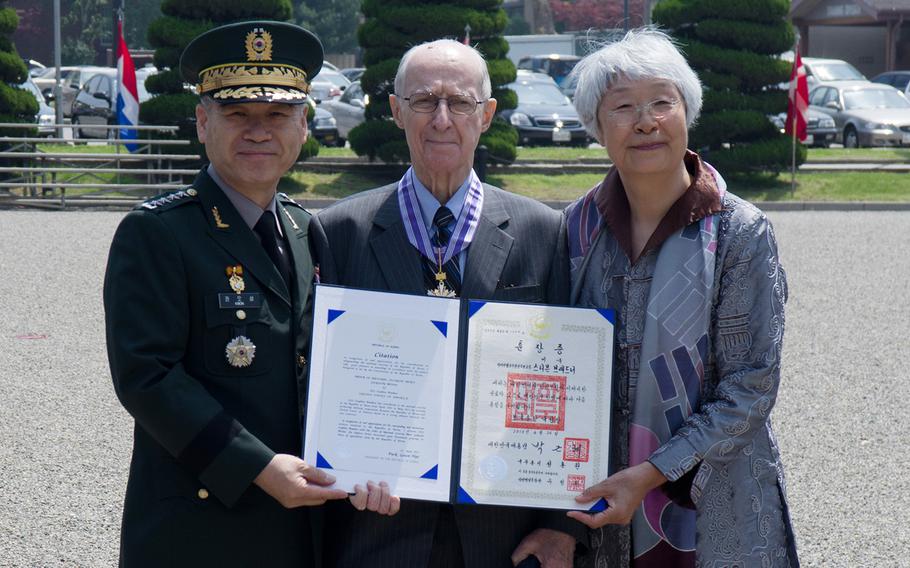 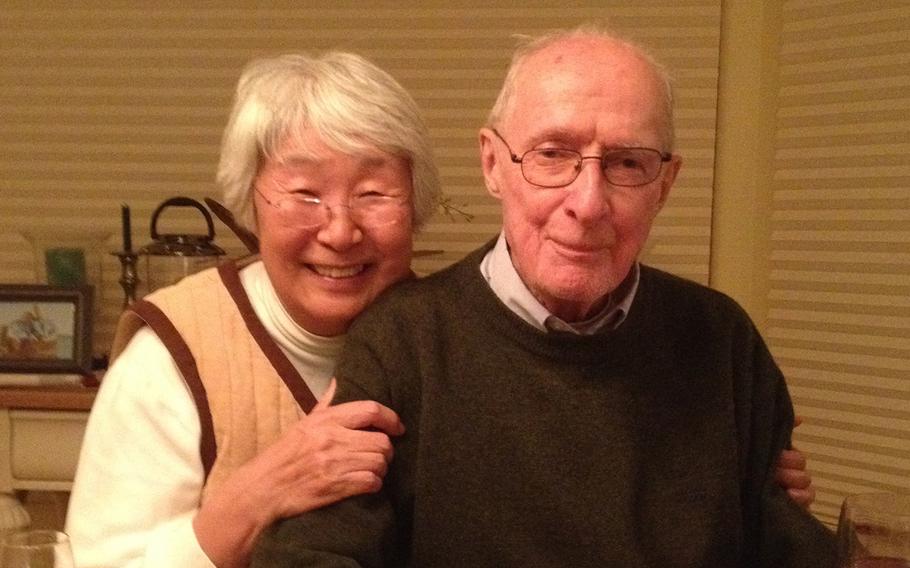 Shin-ja and Stephen Bradner pose at their home in Saunderstown, R.I., Dec. 23, 2014. (Courtesy of Andrew Bradner)

OSAN AIR BASE, South Korea — A former counterintelligence officer who became a senior adviser to 14 U.S. Forces Korea commanders and spent six decades in South Korea has died. He was 86.

Stephen Bradner died on Jan. 17 after a 15-year battle with leukemia at his family home in Saunderstown, R.I., his family said.

Bradner began his career in South Korea as an Army counterintelligence agent interrogating North Korean infiltrators in the months after the 1950-53 Korean War.

He later taught English literature in the southeastern city of Daegu, then returned to the United States where he received a master’s degree in East Asian Studies from Harvard University. He returned to the divided peninsula in 1964 after getting a job as a civilian working for USFK.

In 1973, he rose to the position of deputy special adviser to the commander under Gen. Richard Stilwell. He took the top job in 1981, a position he held until his retirement in 2013.

“Mr. Steve Bradner is a unique national treasure for both the United States and [South Korea],” Thurman said during Bradner’s retirement ceremony.

Living through nearly the entire post-war history of South Korea, he watched the country grow from small Asian backwater to economic powerhouse with all the bumps in between.

He recalled his role in preventing accidental U.S. involvement in a 1960 uprising against then-President Syngman Rhee in an interview with the Asia Times.

“I was worried that our MPs would be dragged into fighting against Korean student protesters for democracy if any violence broke out,” he said. “So, I went to see the commander of the U.S. intelligence unit on the U.S. Army base in Seoul, and told him of my fears that something was about to happen.”

The soldiers were kept in their barracks.

“After a while I became curious how these things on the peninsula would turn out,” Bradner said. “If I hadn’t enjoyed it, I wouldn’t have stayed. Koreans are, by-and-large, a likeable sort of people, and they are moving through history at a rapid rate.”

A fondness that swayed Park Shin-ja, who at the time was a South Korean basketball star, to take his hand in marriage.

The Asia Times reported that Bradner also played a pivotal role in saving the life of a future South Korean president after a regime crackdown in 1981.

“Bradner was one of the officials behind U.S. efforts to spare the life of Kim Dae-jung, who had been sentenced to death by a South Korean military court shortly after the Gwangju tragedy,” the newspaper said in his obituary.

Bradner also took a consistent hard line against North Korea, even during the Sunshine era in the early 2000s when many thought rapprochement with the North was possible. He called the Kim family that runs the country a “mafia-like crime family cult” engaged in a zero-sum game with the South.

“The regime’s leaders utilize gangland practices – counterfeiting, drug smuggling, extortion, kidnapping and assassination — as tools of state policy. And, as one might expect they show indifference to the welfare of ordinary citizens living on their piece of turf,” Bradner wrote in a 2001 military white paper.

In his closing remarks during his retirement ceremony on Knight Field in front of the USFK headquarters known as the White House, he told the troops he believed it was they, not politicians, who kept South Korea safe.

“Behind the ramparts you guard lies everything that matters – light and laughter, bread and family,” he said.

Bradner is survived by his wife, two children and four grandchildren.