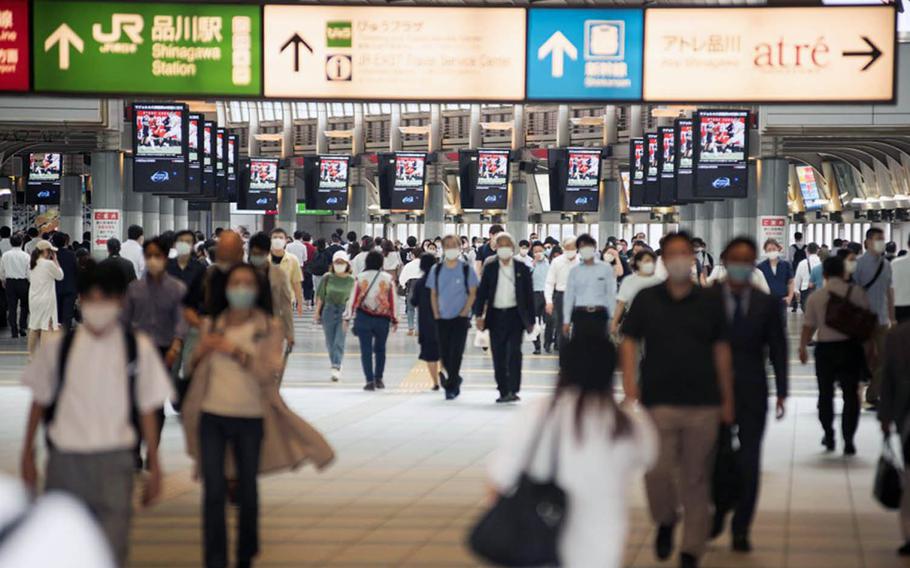 TOKYO — The U.S. military in Japan reported 12 new coronavirus infections Wednesday, while cases in the capital city fell below 200 again for first time since Monday.

Tokyo reported 186 new cases for a total of 18,268, according to public broadcaster NHK. The seven-day moving average ticked up slightly on Tuesday to 261.4 infections per day after falling from a peak of 346.3 on Aug. 5, data on the Tokyo Metropolitan Government website shows.

The metro government continues to ask citizens to refrain from traveling outside the city, dining out at night and taking vacation far outside the area, “saying that the infection situation in the city is extremely severe and the utmost caution is required,” according to NHK.

Yokosuka Naval Base, southwest of Tokyo, reported four new cases, all of them close contacts of another patient. Two other people tested negative for the virus and were released from quarantine, according to a post on the base Facebook page.

Yokosuka has 35 active cases and is one of two U.S. military commands near Tokyo under an elevated risk of the coronavirus spreading, also known as Health Protection Condition-Charlie. The other is U.S. Army Japan, headquartered at Camp Zama.

Wednesday on Okinawa, the Marine Corps reported eight new coronavirus cases: five at Camp Courtney and two at Camp Hansen that tested positive either before leaving quarantine or as a close contact of another infected individual, according to a Facebook post by Marine Corps Installations Pacific. The eighth case, a person at Camp Foster, was moved into isolation after testing positive for the virus. Close contacts of that person were also isolated, according to the post.

Marine bases and Kadena Air Base on Okinawa are under condition Charlie, with limits on travel, with trips off base or from off-base residences limited to essential services such as medical appointments, grocery shopping and bill paying, for example.

The U.S. military has reported 350 coronavirus cases on Okinawa since the pandemic began, 347 of them since July 1. Most of those stem from two cluster outbreaks in July at Marine Corps Air Station Futenma and Camp Hansen.

Okinawa prefecture reported a jump Wednesday to 71 new cases, up from 33 the previous day due to a doubling in the number of tests administered, a prefectural public health official told Stars and Stripes by phone. Between 7% and 9% test positive, the official said.

“As more people get tested, more new cases will be reported,” the official said. “We are not out of the woods yet.”

Japanese government spokespeople traditionally speak on condition of anonymity as a condition of their employment.

Seven people on Okinawa have died since July and another 684 patients have recovered as of noon Tuesday, according to the prefecture. Fourteen are hospitalized in critical condition and 93 are in moderate condition.