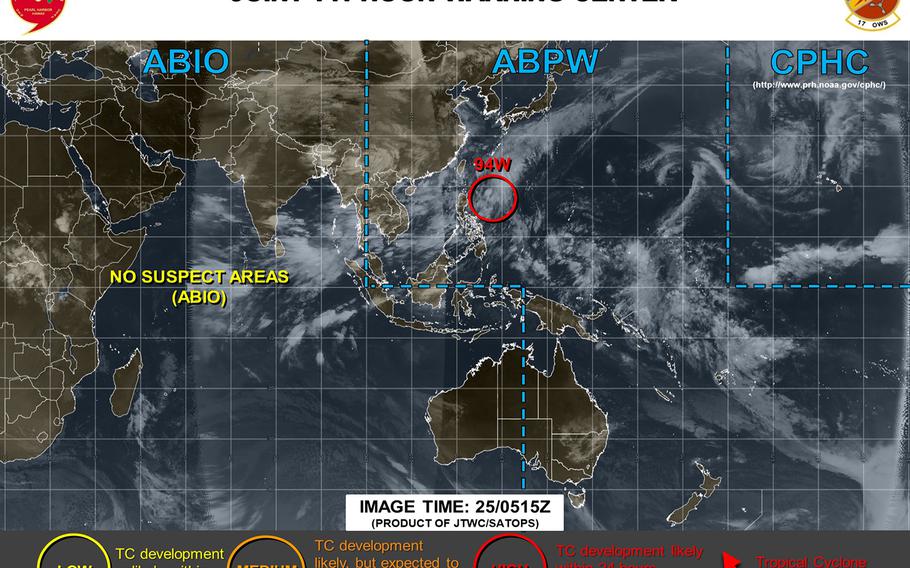 94W Invest has been on the grid for the last couple of days, sitting over warm waters just north of Yap and east of Mindanao in the southern Philippines and crawling slowly north.

NWS officials and Joint Typhoon Warning Center bulletins say that 94W is a broad system moving very slowly northward and not forecast to develop into anything significant at the moment.

Model track guidance is vastly spread, with no “best tracks” available for either the GFS and CMC model ensembles.

One forecaster at NWS on Guam said by Wednesday evening, most models have 94W washing out as it passes several hundred miles east parallel to the northern edges of Luzon Island in the northern Philippines.

Still, this is weather we’re talking. A day ago, the GFS best track had 94W developing into a semi-sort of significant tropical cyclone passing just east of Okinawa. Now, this. Things could change again, and rapidly. These are unpredictable buggers; they can turn on a dime and give back nine cents’ change.

Pacific Storm Tracker will keep an eye on the disturbance.